Hiya peeps! We have debut author Don Allmon visiting today with his brand new release The Glamour Thieves, we have a great excerpt and a fantastic giveaway, so check out the post and leave a comment to enter the giveaway! <3 ~Pixie~ 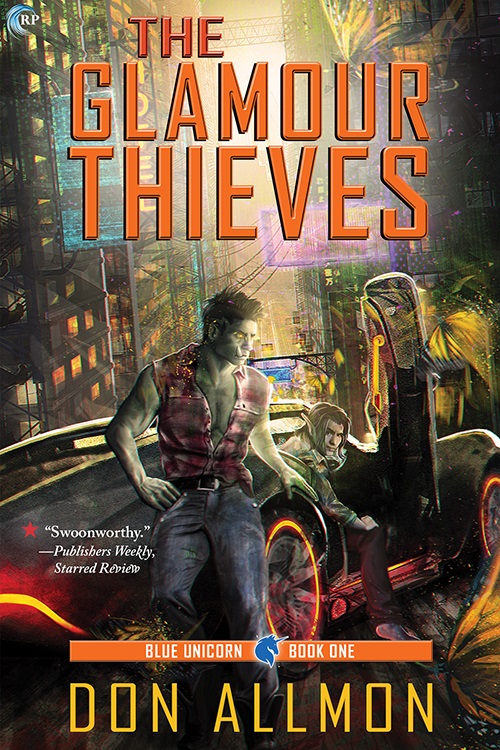 JT is an orc on the way up. He’s got his own boutique robotics shop, high-end clientele, and deep-pocketed investors. He’s even mentoring an orc teen who reminds him a bit too much of himself back in the day.

Then Austin shows up, and the elf’s got the same hard body and silver tongue as he did two years ago when they used to be friends and might have been more. He’s also got a stolen car to bribe JT to saying yes to one last scheme: stealing the virtual intelligence called Blue Unicorn.

Soon JT’s up to his tusks in trouble, and it ain’t just zombies and Chinese triads threatening to tear his new life apart. Austin wants a second chance with JT—this time as more than just a friend—and even the Blue Unicorn is trying to play matchmaker.

Howdy y’all. I’m Don Allmon and I got a debut book name of The Glamour Thieves. It’s the first of a three book series called The Blue Unicorn. It’s a grim kind of fantasy, a cybernetic near-dystopia, a rough-edged romance with few promises except for the ones that matter. Ain’t nothin’ worth earnin’ that wasn’t hard won. Join in on the comments and win yourself some loot.

Austin Shea was wearing the same damn Sanzi wraparound sunglasses and blue-and-green-flowered Hawaiian shirt he’d been wearing the last time JT had seen him. The same khaki pants, tight through the crotch and thighs, loose through the legs. Same shoeless feet like he was a druid and couldn’t lose touch with the ground without losing his power, which was almost true.

Austin took the sunglasses off, and his eyes glittered under the Arizona sky like gold-flecked emeralds. He let the glasses dangle from his fingers as he draped his arms over the winged-open door of the Corvette Dawnstrike FX27. He cocked his head and smiled his winning smile, lopsided. That meant he was about to lie his ass off.

JT’s place: The yard was filled with recyclable scrap plastics and metals like it was a junkyard. The work sheds were prefab, and all of it was surrounded by a turreted wall that made the place look like a prison. There were a dozen urban-support vehicles all lined up in a row being prepped for shipping. Four-legged robots the size of Great Danes crawled among them, polishing. The air smelled of paint and desert heat.

JT folded his arms. “My place makes you trespassing. Get off my land.”

The smile didn’t let up. “I missed ya. You’re looking good.”

JT’s looks: Baggy overalls covered in axle grease and transmission fluid. Plastic baseball cap stained with six years of sweat that smashed his Mohawked hair down and made his green ears stick out even more than usual. He hadn’t shaved in four days.

JT nodded at the car. “Who’d you steal that from?”

They both turned away simultaneously, like they were reverse images of each other—an expression of frustration one had learned from the other, and who could say which one had done it first?

Neither of them moved. JT didn’t call the police.

The Corvette was a coupe on the old design. It was painted Event Horizon Black, same color they were using these days for stealth tech. Illegal in Pacifica. The car was rumored to get six hundred KPH on the magway, plenty of speed to make paste of yourself if you made a mistake. It was an off-balance kind of car, took the right touch to drive—a better touch than Austin had. It took a touch like JT had.

Just knowing that car was there, not even having to see it, made JT’s blood pump a little bit faster. Seeing it, yeah, JT went a little hard. And no, none of that had anything to do with Austin standing there, hair too long and falling over his eyes, long knife-ears swept back and pale in the sun, long, hard-muscled arm draped over the upturned wing of the open door. And thank god for baggy overalls, or Austin might have seen JT hard—might have thought it was him JT was hard for and gotten all kinds of wrongheaded ideas. It was the car, JT told himself. Only the car.

“You can’t bribe me with a stolen car, Austin.”

“Because whatever it is, I’m not doing it.”

JT rubbed his hands on his coveralls, except now they were just as filthy as his hands, so he stripped out of them and left them lying there on the pavement, blue jeans and a Nochi’iru Kitty T-shirt underneath. He touched the fender of the car the same way old Catholics touched statues of the Virgin Mary, except there was nothing virgin about this car here.

JT circled around, and Austin circled around like they needed to keep the car between them. And maybe they did. JT slid into the driver’s seat, and Austin slid into the passenger’s side. The seat molded to JT’s broader frame and shorter legs, and still the cabin was a bit cramped. Had he been any bigger, he wouldn’t have fit. They never sized the nice cars for orc bodies. Orcs never got anything nice.

JT tapped the wireless key and initiated the handshake between his neurals and the car’s brain. “How did you even steal this thing? This is state-of-the-art. You shouldn’t have gotten five blocks without a police lockdown.”

Austin ignored him, evasive as always.

Controls passed to JT’s neurals, and his senses bled into the car’s nav array. High-end as this array was, it took less than a second for the additional senses to integrate, all sliding together like oiled glass. He let out a shaky sigh. His sense of self slipped, a bit of vertigo, and now the car and his body were all one thing. He could feel the car’s engine the same way he could feel his own heartbeat. The dash lit with hologram displays. JT didn’t need them, but not many people had the built-in tech to the extent he had.

Austin jutted his chin out. “You aren’t going to comment on my beard?” What Austin called a “beard” was a patch of short dark peach fuzz on the point of his chin. It tapered out along the edge of his jaw.

“How long did it take you to grow?” JT kept it icy because he sure as hell didn’t want Austin thinking this car was going to work on him.

“Two years. Started it right after you left.”

“I suppose it just grew in like that. Didn’t have to trim it or shape it or anything.”

“You’re bound and determined not to pay me a compliment. You know I said you were looking good. Second thing I said to you.”

“But not the first thing. You don’t need me to stroke your ego.”

“Returning a compliment, it’s only polite.”

“Fine. You look like an elf. You’re gorgeous. Same as every other elf.”

“I’m going to pretend you meant that sincerely. Thank you. I’ve been working out.” Austin flexed a biceps, rock-hard and scar covered.

“No, I haven’t. It’s all genetic.” He looked out the window. “So I fucked a guy until he fell in love with me and gave me the code to his car.”

“I ain’t this, I ain’t that—that’s all I’m hearing from you. When did you get so negative?”

JT laid his heavy hands on the dash and sighed. “What do you want?”

“I want you to drive this car. The way it’s supposed to be driven, not the half-assed way I drive it.” JT is an orc on the way up. He’s got his own boutique robotics shop, high-end clientele, and deep-pocketed investors. He’s even mentoring an orc teen who reminds him a bit too much of himself back in the day.

Then Austin shows up, and the elf’s got the same hard body and silver tongue as he did two years ago when they used to be friends and might have been more. He’s also got a stolen car to bribe JT to saying yes to one last scheme: stealing the virtual intelligence called Blue Unicorn.

Soon JT’s up to his tusks in trouble, and it ain’t just zombies and Chinese triads threatening to tear his new life apart. Austin wants a second chance with JT—this time as more than just a friend—and even the Blue Unicorn is trying to play matchmaker.

In his night job, Don Allmon writes science fiction, fantasy, and romance. In his day job, he’s an IT drone. He holds a master of arts in English literature from the University of Kansas and wrote his thesis on the influence of royal hunting culture on medieval werewolf stories. He’s a fan of role-playing games, both video and tabletop. He has lived all over from New York to San Francisco, but currently lives on the prairies of Kansas with many animals. To celebrate the release of The Glamour Thieves, one lucky winner will receive a $20 Riptide gift card!