Hi guys, we have N.R. Walker popping in today with her new release The Hate You Drink, we have a great excerpt and a fantastic $40 Amazon GC giveaway so check out the post and enter the giveaway! ❤ ~Pixie~ 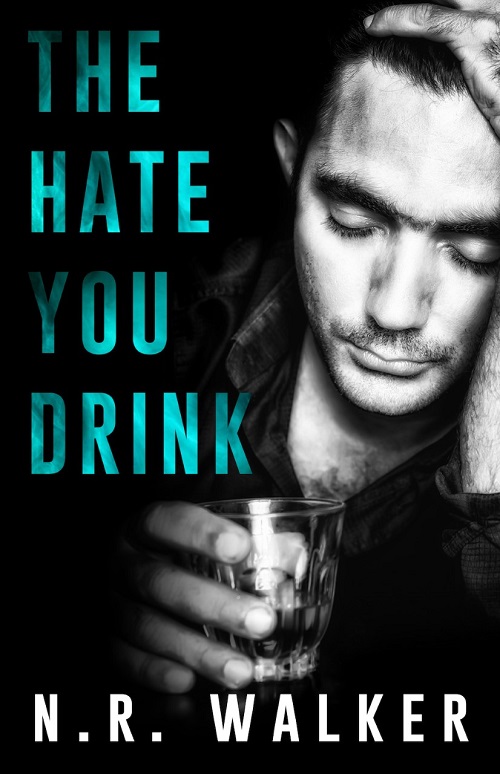 The Hate You Drink

“Because when all you drink is hate, that’s what you become.”

Erik Keston, son of the Keston Real Estate empire, knows what it takes to be successful. Despite his inherent wealth, he holds his own. He works hard, he’s grounded, he’s brilliant. He’s also secretly in love with his best friend.

Monroe Wellman lost his parents three years ago and never grieved, never recovered. Inheriting the family company and wealth means nothing, and his spiral of self-destruction is widespread and spectacular. Dubbed Sydney’s bad boy, he spends more days drunk than sober, and the only person who’s stuck by him through it all is his best mate.

But when Monroe hits rock bottom, Erik gives him an ultimatum, and his entire world comes to a grinding halt. But it’s when thehaze is lifted that Monroe can truly see what he’s been searching for was never in the bottom of a bottle. It’s been by his side all along.

An 80,000-word friends to lovers story about fighting the demons within, and trusting in the love that takes its place. I didn’t need to see the photographs of the wrecked car or the glass and metal strewn across the gutter. I didn’t need the reminder of how close it had been this time. I closed the newspaper, folded it in half, and slid it across the counter and let out an exhausted sigh. I didn’t want to meet Jeffrey’s disappointed gaze. I knew that look. I’d seen it more times than I could count. Jeffrey Kwon, a distinguished Korean-Australian man with short greying hair and a kind face, had been a close friend of Monroe’s parents as well as their trusted lawyer for thirty years, and Jeffrey assumed the same role for Monroe when his parents died. He was no-nonsense and astute, but he had a heart of gold and everyone knew Monroe would be lost without him. Well, everyone but Monroe.

“Still asleep,” I replied. I walked over to the nearest couch and all but fell into it, my head in my hands.

“You haven’t been to bed yet?”

I was too tired to even scoff. “Nope. It was after three by the time we left the police station. And then I had to get him into bed.” I didn’t tell him that I’d sat on the end of Monroe’s bed when he’d passed out, trying to calm my anxiety. How many nights had I got a phone call from him, drunk, needing help or a lift, to pick him up from a bar or the police station? A quick glance at my phone told me it was just after eight. The morning sun was up and glaring angrily over the Pacific like it could feel my mood. I scrubbed my hand over my face, feeling the minutes of sleep I’d missed. “How he didn’t hurt himself or someone else, I’ll never know.”

“It’s only a matter of time before he does.” Jeffrey’s tone was as sharp as his suit, whereas I felt like Monroe’s crumpled wreck that had been winched onto the tow truck last night.

“I’ll have the insurance forms sent over this afternoon,” Jeffrey said. He rarely let his emotions show, but I could tell he was angry and disappointed. He was probably a dozen different emotions right now. What he wasn’t was surprised. This was far from the first time.

“Thanks, Jeffrey. He does appreciate it.”

He gave a nod and walked toward the grand foyer, but he stopped before he got to the door. “Does he? Does he appreciate all you do for him?”

I didn’t answer. Even if I knew what to say, I couldn’t get the words out. But Jeffrey didn’t wait for a reply. The soft click of the front door was loud in the silence.

My heart was a weighted lump in my chest. My ribs felt too tight like I couldn’t breathe properly. Like I hadn’t been able to breathe properly in years. The space of Monroe’s house was vast—tiled floors, high ceilings, glass walls overlooking the ocean, no expense spared—yet the vast emptiness was overwhelming. A mansion worth several million dollars, on every elite real-estate list in Australia, was a hollow void of loneliness and grief, much like the man who owned it. Who was, at that very moment, passed out drunk in his bed.

The heaviness of the last twelve hours settled over me, and I slumped down on the couch, pulled a cushion under my head, and closed my eyes.

I startled and shot up. Disoriented at first, until I remembered I was on Monroe’s couch. He was standing at the end of the sofa with his arms full of brown paper bags, and then I could smell something.

“I was starving,” he said. “And Uber Eats is a gift from the gods. Shuffle up.”

I slid up the couch a little and he parked himself next to me, shoved the bags and a pizza box onto the coffee table, then pulled it toward us. “I didn’t know what you felt like, so I got that wood-fired pizza you like and some curry and—”

“What time is it?” I asked. Usually the view out the window was a good indication of the time, but it had come over cloudy. Summer storms usually rolled in around four.

“Shit. I didn’t mean to sleep that long. I was supposed to go into the office today.”

Monroe shrugged like he did to most responsibility. “Here, get this into ya.” He opened the pizza box and turned it to face me.

I took a bite and moaned. It was so good. “How long you been up?”

His black hair was damp and he smelled of salt water. “I didn’t hear you swim.” Which was surprising considering the living room opened up into the pool area.

“Stealth mode,” he said with a grin, his blue eyes sparkling. “Nah. You were dead to the world.”

I didn’t bother explaining that I didn’t get to sleep till after eight. I studied his face; there was a small scratch on his forehead and marks on his hands, probably from the glass or air bag. “How you feeling?”

And that was his problem. He always woke up feeling fine. Maybe if he’d ever suffered just one hangover in his life, he might think twice about drinking so much.

He grimaced for half a second before he took another forkful of curry. “You see Jeffrey?”

I nodded. “He was here before eight this morning. He brought the paper with him.”

Monroe stirred his curry, frowning. “Was he mad?”

“Yep. Said he’ll have the insurance papers sent around for the car.” I took a bite of pizza and swallowed it. “Wanna tell me what happened last night?”

He sighed. “Not really. I had one too many. You know how it is.”

He frowned again, this time stabbing a piece of curried beef. “I was fine. I didn’t feel drunk at all.”

I knew there was no point in arguing with him, so I tried a different approach. “You could have hurt yourself, Monroe,” I said gently. “Or someone else. You’re lucky it was a pole you hit and not a pedestrian or a car full of kids.”

He pointed his fork at me. “That is true. Well, there’s the old Discovery in the garage,” he said. “Haven’t driven that in a while.”

“Old? It’s two years old,” I said. “And you’re not driving it anywhere. You get caught driving unlicensed now and the judge will likely throw the book at you to prove a point. Not to mention that unlicensed means uninsured.”

“Where’s your sense of adventure?” he asked, giving me that sly grin that usually got him out of all kinds of trouble.

“My sense of adventure is keeping you out of jail.”

He chuckled and nudged me with his shoulder. “Always looking out for me,” he said. “Thanks, by the way, for coming to get me last night.”

“I should have left you there,” I said, nudging him back. “In a cell with two guys named Warthog and Donk.”

He laughed. “Sounds like a dream I had once. It didn’t end badly, let’s just say that much.”

He put his curry down and took a slice of pizza, biting into it. “Mmm, this is good too. Hey, we should go out tonight. There’s a summer blues night on at the Wharf.”

I shook my head, but he was, like always, relentless and charming and so fucking cute, and I could never say no to him. Which was another one of my problems.

“Come on, it’ll be fun. It’s summer. We’ll have a swim, laze about for the afternoon, have a nap, then we can go out later. Who knows, you might even find some random to take home.”

I forced a smile, like I always did. “Unlikely.”

“Dunno why,” he said, oblivious. “You don’t look half bad,” he said with a smirk and a nudge. “If a young Robert Redford is your thing and you have more money than God. And fuck knows guys throw themselves at you.”

“Shut up, you know you do.” He pushed the pizza box away. “You know what your problem is, Erik?”

Actually, I did. But I played along. “Nope, tell me what my problem is.”

I snorted. “Is that right?”

“Yep. So tonight, when a guy looks twice at you, take him into the bathrooms.”

“Not really my style, but thanks.”

He laughed and stood up, then walked toward the pool. The glass doors were all pushed back, transforming the inside living area into a huge outdoor living area. He peeled off his shirt and stopped to face me. He looked even better in the sunlight. “Are you gonna lecture me about swimming after eating?”

“Then get your arse into the pool with me. It’s too nice a day and life is too damn short.” He tossed his shirt and dived into the pool.

And there were both our problems laid bare. His was that he shirked off all responsibility, drank far too much, and lived like every day was his last, which in his case, with his drinking problem and reckless nature, it very well could be.

Oh, that, and I was absolutely head over heels in love with him. Had been since we were eighteen years old. I was so in love with him, I’d let him treat me like a doormat if it just meant he’d keep me around. It was a sickness.

He had his addiction, and he was mine.

His addiction to alcohol was killing him.

And watching him slowly spiral out of control, being so close to him but so far away, was killing me.

Addiction, in all its forms, fucking sucked.