Hi peeps! We have Edie Montreux visiting today with her new release The King’s Physician, we have a short guest post from Edie, a great excerpt and a brilliant giveaway where there is 2 $10 Amazon GC’s up for grabs, so check out the post and enter the giveaway! ❤️ ~Pixie~ 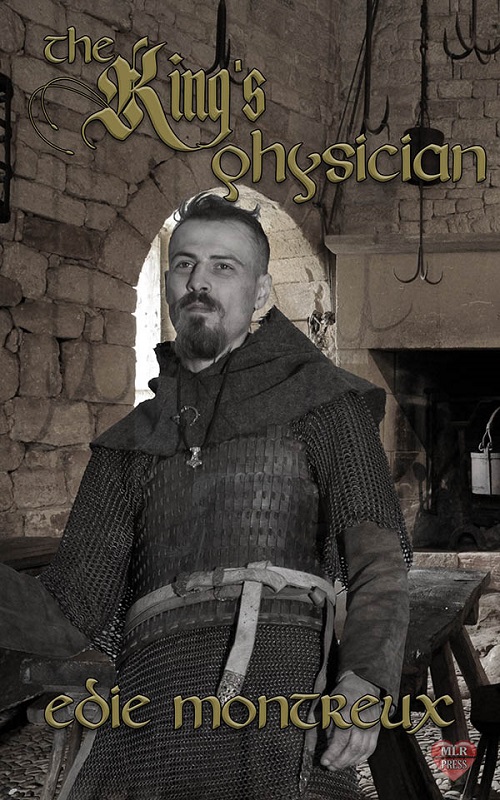 Devlin was the King’s Physician until a blood mage siphoned Devlin’s magic and used it to wipe the kingdom’s memories. Sir Eldrich, his replacement, has protection against Filvane’s spells, but he only knows the whispered rumors: Devlin, the former King’s Physician, stole King Korgon’s crown on his coronation day.

Once Eldrich is appointed King’s Physician, Devlin notices a decline in King Korgon’s health and wonders if Eldrich is to blame. When Eldrich nearly bleeds to death on Devlin’s doorstep from grievous sword wounds, they’re thrown together in a race to keep King Korgon alive. They question the other’s allegiance to their king , but it will take their combined efforts and trust to stop Filvane from destroying Korgon and the entire realm of the living. In the end, these two King’s physicians may have more in common than their titles. They may even fall in love.

Thanks so much for giving me a bit of space on your blog to gush over my current release, The King’s Physician. Today, I’m going to talk about something sadly lacking this January in the Midwest: snow. Snow always finds its way into my stories. I haven’t worked it into my Hollywood romances yet, but I’m sure there’s a way. There’s snow in Sarajevo for Spread Your Wings. There’s snow in the Grand Tetons for Pika Perfect (coming soon from MLR Press). Of course, there’s a snowstorm at the beginning of The King’s Physician because I started the story last winter. Even when it’s not winter, I write about winter. I love watching falling snow. Thinking of the peaceful stillness of snowfall before I settle in to write helps me find my muse. If I had a magical power, it would probably be snow-related.

I also love a roaring fire. Several scenes in The King’s Physician take place in a washroom just off a vault the Underground has converted into a prison cell. How else would they warm the water for baths? It made sense to have a fireplace, especially since they’re in a sunken section of the king’s castle where amenities abound. Snow and fire are always intertwined in my heart. I don’t like being cold. I love watching the snow fly outside while beside the toasty-warm glow of a winter fire. If you like snow, too, I hope it finds you this winter. Once he was finished stitching the wounds closed, Devlin studied the young man’s slack face. He had a strong jaw, and his cheeks had only a couple of hours’ worth of blond stubble beneath well-trimmed sideburns. A ponytail of wild blond curls tangled at his shoulders, secured with a band of braided leather. He was probably the best-looking man Devlin had ever seen on his cot, and not for lack of trying. He’d brought many strangers into his operating room for one reason or another.

The young man regained consciousness as Devlin soaked his tools in a jar of alcohol. “How long have I been here?” he demanded, snatching his jacket and shirt from the table and clutching them to his bare chest. He seemed especially concerned about displaying the tattoo on his left shoulder. Devlin hadn’t paid it much attention. He’d been more intent on searching the young man’s clothing for hidden pockets.

“Maybe an hour,” Devlin said. Long enough to go through the man’s pockets and find them empty, even the hidden breast pockets and boot sheath.

“I was robbed,” the young man said. “Did you see my attackers?”

Devlin shook his head. He’d been too preoccupied saving the man’s life to notice anyone following him. Robbery explained why the man had nothing, not even a scrap of coin.

The longer the man sat on the cot, the worse he appeared. Too soon for infection, Devlin was certain. He handed the man a glass of water, which he took and sipped.

“Do you have an indoor toilet?”

Devlin pointed him in the direction of the water closet, on the other side of the stairs from his operating room. After a few moments, he heard retching. Devlin thanked the gods he’d cleaned the toilet before starting to sweep.

After a few moments of intense choking and a few sobs, something solid clattered into the bowl. Devlin kept no trinkets in the small room, and the man hadn’t time to steal anything.

The pipes creaked and groaned, drowning out all other sounds. Devlin returned to work. He dusted the books along the back shelves to pretend he wasn’t eavesdropping.

The man returned, a little disheveled but more energetic than before. Devlin noticed a bulge in his breast pocket. He’d checked that pocket while the man lay unconscious. Now, it would be damn near impossible to frisk him again without seeming forward.

Devlin waited for the right time. He offered tea, or coffee, or more water. “You still look a little under the weather.”

“Breath mint?” he asked as he followed the man up the main aisle of the store.

Devlin handed him one from the bowl of candies by the cashbox. He grabbed one for himself for good measure.

“I can close up shop, then, and walk you home.”

“Oh.” The castle. The one place Devlin could not go, in all of Dovington. Damn Filvane, and damn Korgon for banishing him. “Well, glad you’re all right, then.” Devlin grasped the man’s hand as he turned toward the door. “You never told me your name.”

“Sir Eldrich.” Even his name sounded full of coin, and familiar, damn it all.

“Are you King Korgon’s new physician?” Devlin asked with a sinking feeling in the pit of his stomach.

Devlin should have known. Blue and gold were the colors of Korgon’s court. The blush in Eldrich’s cheeks encouraged him. The affirmative identity also eased his conscience. He could steal from his successor, if it meant discovering his dark purpose. The bulge in Eldrich’s breast pocket could be an item of high treason, he thought as he pulled Eldrich into a hug. He snaked one arm between them to pluck the heavy object from the inner breast pocket of Sir Eldrich’s suit coat. He touched cold metal and a smooth glass-like surface.

“Why, sir. This is quite unusual,” Eldrich said, his warm breath tickling Devlin’s ear.

Devlin let go and leaned back to look in Eldrich’s hazel eyes. Eldrich’s lips parted in surprise. Devlin took the invitation and leaned in for a kiss, the perfect distraction.

Eldrich responded like a drowning man. He pushed his body against Devlin’s, clutching Devlin’s hip with his good hand so Devlin couldn’t back away. Eldrich’s kiss wasn’t as foul as Devlin had feared, especially with the powerful peppermint candy in his mouth. The way Eldrich kissed more than made up for a little bile. He almost wished they could stay like this, two strangers with no mutual acquaintances. The ruse would be discovered the moment Eldrich realized who he was.

Devlin moaned as he slipped the object into the secret compartment in the lining of his belt. Sir Eldrich whimpered as Devlin broke the kiss.

“A kiss, for luck,” Devlin said. “Good luck getting to the castle.”

“Yes,” Eldrich said, fear replacing desire in his eyes. “I must hurry, sir…”

“Devlin,” Eldrich said with a smile devoid of recognition. “if I am successful, I will return with your reward.”

Devlin had a feeling Eldrich would return with a battalion of guards instead. He hoped the bauble was worth it. Edie Montreux is a cis/demi/het ally for all aspects of the LGBTQ+ rainbow. She loves her husband, Queen, dogs, and video games. Edie works full-time to support her LGBTQ-fiction writing habit, but still finds time to walk the dogs and protect imaginary worlds from fantasy creatures.

Edie also has a Facebook Author page, Twitter, Instagram, Goodreads, and Amazon. Email Edie and let her know what you think of The King’s Physician! If you also like M/M romance set in the early 1990’s and you love Queen, read her first novel, Spread Your Wings.

You can find her online at Website. If you want to know more about Edie’s upcoming projects, join her newsletter: https://www.subscribepage.com/t7b1x6.