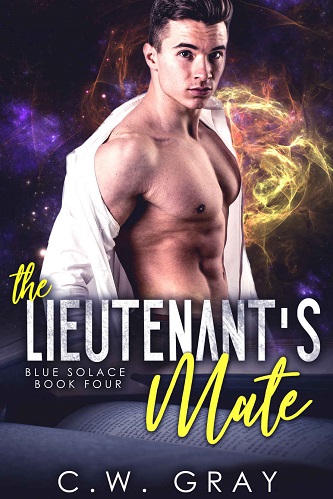 Sebastian Dolarnio has a past. His parents sold him into indentured servitude when he was seventeen which led him to enforced prostitution. Fortunately, with the help of some very good friends, him and his daughter are safe and have a home – a beautiful, accepting place with more family than he ever dreamed of having. Then there’s his mate. A handsome, wonderful man calls Sebastian “mate” and Sebastian knows he doesn’t deserve him. He has to find a way to be worthy of his new home and his new mate. A strange Crellic book provides him with the answer to his problems, but it comes with complications of its own.

Alois has been dreaming of finding his life-mate since he was a kid. He knows that Sebastian is a dream come true, but how can he convince his mate of that plus fight the baggage he carries from his own past? When Sebastian begins a strange, wonderful journey, Alois knows that he has to be the loving and supportive mate that Sebastian deserves.

The two men build a life together and learn to love one another, but the galaxy is in turmoil and Charybdis Station is in the middle of it all.

Review: On a world where slavery was normal, a young man had been sold by his parents to pay a debt. He was seventeen and forced into prostitution which left him pregnant and alone. He did not even know who his baby’s father was, but he still loved the peanut. His favorite person was trying to help but died helping another. Her friends came and rescued him, which is how he met the man he will love, a mate.

Alois is a fierce fighter but becomes all mushy when he is around Sebastian. He knows the man is his mate, but also that he needs time to heal. Then something strange happens to Sebastian and lets just say the world is going to get quite interesting.

Sebastian and Alois had met in one of the previous books but now they get to have their own story being told. I love the fact that even though it does have a serious tone to it, it also has so much humor mixed in that makes it pop out to me. The way they are with each other and their friends is amazing, plus even if they are not family they will become family. Fire was just adorable and I can’t wait to see what happens next with him.

Action packed, excitement filled, and some hot sexy times are just a few things you get in this story. I can’t wait to start reading the next book. I can guarantee that it will be read many times over.