Hi guys, we have Rick R. Reed popping in today with his new release The Man From Milwaukee, we have a great excerpt and a brilliant $10 NineStar GC giveaway so check out the post and enter the giveaway! ❤️ ~Pixie~ 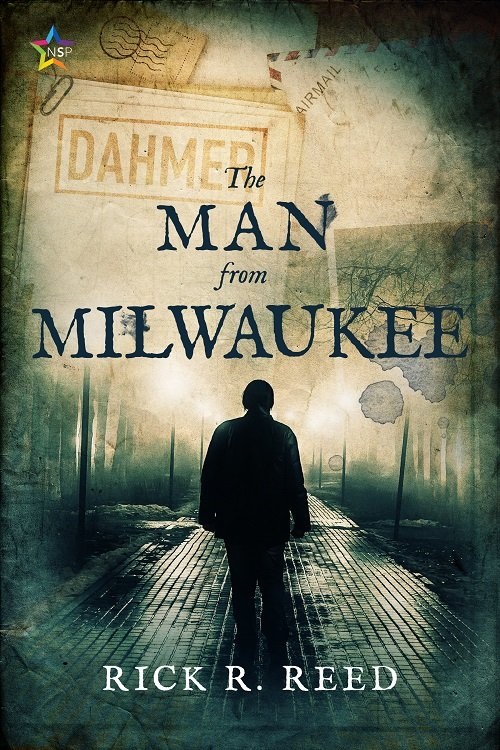 The Man From Milwaukee

It’s the summer of 1991 and serial killer Jeffrey Dahmer has been arrested. His monstrous crimes inspire dread around the globe. But not so much for Emory Hughes, a closeted young man in Chicago who sees in the cannibal killer a kindred spirit, someone who fights against the dark side of his own nature, as Emory does. He reaches out to Dahmer in prison via letters.

The letters become an escape—from Emory’s mother dying from AIDS, from his uncaring sister, from his dead-end job in downtown Chicago, but most of all, from his own self-hatred.

Dahmer isn’t Emory’s only lifeline as he begins a tentative relationship with Tyler Kay. He falls for him and, just like Dahmer, wonders how he can get Tyler to stay. Emory’s desire for love leads him to confront his own grip on reality. For Tyler, the threat of the mild-mannered Emory seems inconsequential, but not taking the threat seriously is at his own peril.

Can Emory discover the roots of his own madness before it’s too late and he finds himself following in the footsteps of the man from Milwaukee?

The Man from Milwaukee, Rick R. Reed © 2020, All Rights Reserved

Dahmer appeared before you in a five o’clock edition, stubbled dumb countenance surrounded by the crispness of a white shirt with pale-blue stripes. His handsome face, multiplied by the presses, swept down upon Chicago and all of America, to the depths of the most out-of-the-way villages, in castles and cabins, revealing to the mirthless bourgeois that their daily lives are grazed by enchanting murderers, cunningly elevated to their sleep, which they will cross by some back stairway that has abetted them by not creaking. Beneath his picture burst the dawn of his crimes: details too horrific to be credible in a novel of horror: tales of cannibalism, sexual perversity, and agonizing death, all bespeaking his secret history and preparing his future glory.

Emory Hughes stared at the picture of Jeffrey Dahmer on the front page of the Chicago Tribune, the man in Milwaukee who had confessed to “drugging and strangling his victims, then dismembering them.” The picture was grainy, showing a young man who looked timid and tired. Not someone you’d expect to be a serial killer.

Emory took in the details as the L swung around a bend: lank pale hair, looking dirty and as if someone had taken a comb to it just before the photograph was snapped, heavy eyelids, the smirk, as if Dahmer had no understanding of what was happening to him, blinded suddenly by notoriety, the stubble, at least three days old, growing on his face. Emory even noticed the way a small curl topped his shirt’s white collar. The L twisted, suddenly a ride from Six Flags, and Emory almost dropped the newspaper, clutching for the metal pole to keep from falling. The train’s dizzying pace, taking the curves too fast, made Emory’s stomach churn.

Or was it the details of the story that were making the nausea in him grow and blossom? Details like how Dahmer had boiled some of his victim’s skulls to preserve them…

“Sick, huh?” Emory jumped at a voice behind him. A pudgy man, face florid with sweat and heat, pressed close. The bulge of the man’s stomach nudged against the small of Emory’s back.

Emory hugged the newspaper to his chest, wishing there was somewhere else he could go. But the L at rush hour was crowded with commuters, moist from the heat, wearing identical expressions of boredom.

“Hard to believe some of the things that guy did.” The man continued, undaunted by Emory’s refusal to meet his eyes. “He’s a queer. They all want to give the queers special privileges and act like there’s nothing wrong with them. And then look what happens.” The guy snorted. “Nothing wrong with them…right.”

Emory wished the man would move away. The sour odor of the man’s sweat mingled with cheap cologne, something like Old Spice.

Emory gripped the pole until his knuckles whitened, staring down at the newspaper he had found abandoned on a seat at the Belmont stop. Maybe if he sees I’m reading, he’ll shut up. Every time the man spoke, his accent broad and twangy, his voice nasal, Emory felt like someone was raking a metal-toothed comb across the soft pink surface of his brain.

Neighbors had complained off and on for more than a year about a putrid stench from Dahmer’s apartment. He told them his refrigerator was broken and meat in it had spoiled. Others reported hearing hand and power saws buzzing in the apartment at odd hours.

“Yeah, this guy Dahmer… You hear what he did to some of these guys?”

Emory turned at last. He was trembling, and the muscles in his jaw clenched and unclenched. He knew his voice was coming out high, and that because of this, the man might think he was queer, but he had to make him stop.

“Listen, sir, I really have no use for your opinions. I ask you now, very sincerely, to let me be so that I might finish reading my newspaper.”

The guy sucked in some air. “Yeah, sure,” he mumbled.

Emory looked down once more at the picture of Dahmer, trying to delve into the dots that made up the serial killer’s eyes. Perhaps somewhere in the dark orbs, he could find evidence of madness. Perhaps the pixels would coalesce to explain the atrocities this bland-looking young man had perpetrated, the pain and suffering he’d caused.

“Granville next. Granville will be the next stop.” The voice, garbled and cloaked in static, alerted Emory that his stop was coming up.

As the train slowed, Emory let the newspaper, never really his own, slip from his fingers. The train stopped with a lurch, and Emory looked out at the familiar green sign reading Granville. With the back of his hand, he wiped the sweat from his brow and prepared to step off the train.

Then an image assailed him: Dahmer’s face, lying on the brown, grimy floor of the L, being trampled.

Emory turned back, bumping into commuters who were trying to get off the train, and stooped to snatch the newspaper up from the gritty floor.

Tenderly, he brushed dirt from Dahmer’s picture and stuck the newspaper under his arm.

Kenmore Avenue sagged under the weight of the humidity as Emory trudged home, white cotton shirt sticking to his back, face moist. At the end of the block, a Loyola University building stood sentinel—gray and solid against a wilted sky devoid of color, sucking in July’s heat and moisture like a sponge.

Emory fitted his key into the lock of the redbrick high-rise he shared with his mother and sister, Mary Helen. Behind him, a car grumbled by, muffler dragging, transmission moaning. A group of four children, Hispanic complexions darkened even more by the sun, quarreled as one of them held a huge red ball under his arm protectively.

As always, the vestibule smelled of garlic and cooking cabbage, and as always, Emory wondered from which apartment these smells, grown stale over the years he and his family had lived in the building, had originally emanated.

In the mailbox was a booklet of coupons from Jewel, a Commonwealth Edison bill, and a newsletter from Test Positive Aware. Emory shoved the mail under his arm and headed up the creaking stairs to the third floor.