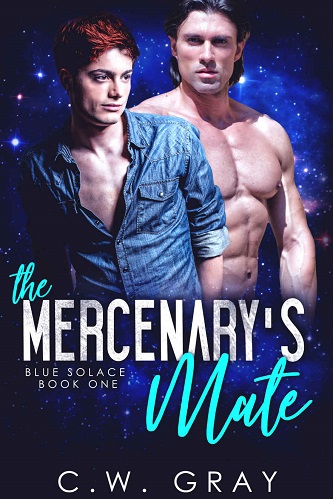 Blurb: Welcome to the mercenary ship, The Blue Solace:

Leti Ando needs off planet and fast. He has a best friend and a new half-sister to rescue, and he needs to be sneaky about it. Unfortunately sneaky isn’t really his thing. With the help of a friend, Leti and his menagerie, along with his two companions, stow away aboard a mystery ship. Little does he know that The Blue Solace belongs to the infamous mercenary, Captain Will Hackett, a man he’ll come to love with everything inside him.

Will has been in a bitchy ass mood for the past six months. He’s restless and grumpy, but doesn’t know why. He knows he needs something and he can’t find it, but his crew are out of patience and insist on some R &R back home at Charybdis Station.

Then Hack finds a stow away angel and everything changes. Leti is his mate and he’ll do anything to keep him safe and happy, even smile.

The galaxy’s not a safe place, though, and The Blue Solace has a job to do: pick up a renowned scientist and his mysterious artifact. Then get them safely back to Charybdis Station. Hack and Leti don’t realize their romance story is about to get hijacked by Concord mercenaries. Their love is easy, it happens just like that. Staying alive and keeping the galaxy safe? That’s a little harder.

Review: Leti is half Prime and half Wello, which means he is a breeder male. As nasty as his father is to him, he is even more evil then one would expect. He has put Leti’s half sister on the block to be sold to the highest bidder. Thank god he had a friend who would be doing the bidder for him. He was determined to get his best friend, little sister and all of his animals off this blasted planet. They were going to stow away on a ship ran by mercenaries, although I am not sure he knows that part.

Will is getting moodier and moodier as time goes by. One of his crew realizes it just might be a sign that he is going to find his mate. What he finds is his mate, another young man, a baby girl and a large amount of animals in crates on his ship. Lets just say he won’t be getting moody after that.

Damn this was a blast to read, a real big surprise for me. Leti has a way with animals and damn if he just doesn’t seem to collect more family. There is very low angst throughout the story but does have quite a bit of action. Between the two however there is zero angst, well unless you count space walking. This is the first book by this author that I have read and lets just say she is going to become a favorite if she keeps this type of writing up. My attention was caught and damn if I don’t want to go back and read it again.

I can’t wait to get my hands on the next book. I had a blast reading it and would definitely recommend it. I can honestly say that this is one of those stories that will be read many times over.