Hi guys! We have Beryll & Osiris Brackhaus popping in today with the tour for their new release The Pet and his Duke, we have a fantastic exclusive excerpt and Shorty’s review so check out the post and enjoy! ❤️ ~Pixie~ 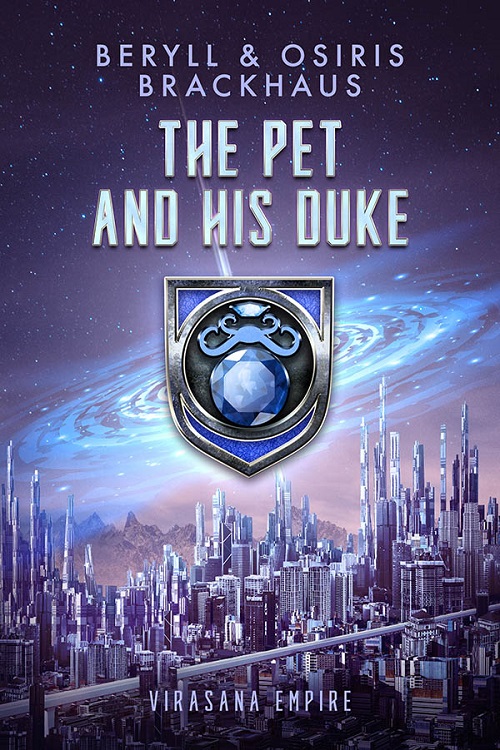 The Pet and his Duke

(a Virasana Empire novel)
by

Robert is a pet, a human pleasure slave, and well past his prime.

‘The Pet and his Duke’ is a standalone m/m romance novel in the ‘Virasana Empire’ universe. Written by Rainbow Book Award winners Beryll and Osiris Brackhaus, it is a story of self-determination and love, and Happily-Ever-Afters in the most unlikely places. Robert was trying to remember when he had last felt so tired, sore, dirty, used, yet at the same time shamefully satisfied as he did while slowly making his way back to his master’s suite.

Definitely after that party his third owner had thrown to celebrate his acquisition with all his friends. But back then he had been young and had been kept locked away for most of his life. Though, looking back at that evening now, it had been rather harmless fun.

During his brief stay with that noble who had put his pets on display on a theatre stage to be fucked by all comers? No, that had only been degrading, painful and a bit boring.

Maybe when he had been on loan to that Quetzal noble from Serin who enjoyed watching his pets getting fucked by his ‘stud’, a slave he had had specially modified for size, stamina, texture and curve. Yes, that had definitely held that same sense of ‘shameful fulfilment’.

He winced as his guts reacted to his laugh with a painful cramp.

So, no laughing, at least for the next few hours.

But none of those, admittedly interesting, experiences had prepared him for the sheer alien feeling of several things moving inside of him at once. Who would have thought that demon would hide so many, so amazingly flexible, tentacles under its unassuming robes?

A shudder ran through Robert as his body remembered the last few hours. What an instructive afternoon it had been. Apparently, even a pet his age wasn’t past learning new tricks.

Still, he was feeling his age now. All he longed for was a long soak in a hot bath and a strong drink. As interesting as the experience had been, he felt soiled somehow. A notion he had considered himself long beyond.

He sighed with relief when he reached the Duke’s quarters and slipped inside, heading straight for the bathroom.

“Where the FUCK HAVE YOU BEEN?!” the voice of his master stopped him in his tracks.

Why was Thomar home already? He was supposed to be at some cocktail party. And why was he so furious?

Turning around, he found the young Duke stalking towards him, his eyes dark with anger and his hands balled into fists. Confused, he blinked at his master, not sure what he had done to suddenly be on this unpleasant side of Thomar’s temper.

While he was trying to come up with some suitable answer, Thomar grabbed him by the front of his shirt and pulled him down, sniffing at him.

“WHAT THE FUCK!?!” the Duke exclaimed, his voice rising in volume another notch.

Robert had no idea what he was so surprised and upset about. After all, he had ordered this.

“My lord…?” he finally managed to give voice to his confusion.

A second later, he was on the floor, having been slapped so hard his ears were ringing. It had been so quick, he had barely seen his master move.

Finally, years of training kicked in and he assumed a kneeling position as quickly as the fact that he felt plenty sore and abused and that he was seeing stars allowed. In that moment, he was very grateful that some things were ingrained so deeply he could have done them in much worse condition. Back straight, wrists crossed behind it, head lowered. It came quite naturally.

“Answer my fucking question. Where have you been?!” his master hissed, obviously not impressed.

“I have been with the Lord Tss’lath, master,” Robert answered flatly, his mind racing as he tried to find out what he had done wrong.

He did not resist when Thomar grabbed him by the hair, forcing his head up so he looked each other in the eye again.

The question was spoken softly and Robert could have sworn there was genuine hurt in his master’s voice but that was probably his own hurting head playing tricks on him.

“He made use of me, master.” That would have been the correct and sufficient answer, but for some reason, Robert added, “just like you ordered.”

That made Thomar eyes flare up with fresh rage. “I ordered no such thing!”

Robert blinked at him in confusion. That would of course explain the young duke’s dark mood.

“But…” he stammered, his mind suddenly feeling muddled, “he said … you had said…”

“And it didn’t ONCE cross your mind to verify this with me?!” Thomar shouted angrily. “When have I EVER shared you with ANYONE, let alone a fucking DEMON?!”

Now that he spelled it out loud, it didn’t make much sense. But the thought of questioning the demon hadn’t crossed Robert’s mind. It had felt so logical and correct.

“I … I don’t know…” he muttered, helpless and confused.

Strangely, that caught Thomar’s attention and suddenly his face changed from murderous rage to thoughtful. He crouched down in front of Robert and took hold of his chin.

“Hold still,” he ordered, much calmer now and gazed into Robert’s eyes intently.

Immediately, Robert felt vertigo, the floor feeling like it was tipping to the side. When Thomar let go of his chin, he wasn’t able to maintain his position and crumbled to the floor, feeling sick.

Whatever Thomar had seen seemed to have diverted his wrath from Robert for the moment, though, as he started pacing restlessly.

Robert felt like retching, but with iron self-control, he managed to pull himself together. He was almost getting back into his kneeling position when Thomar addressed him again.

“I expect to find you in my bed when I get back,” he commanded calmly.

Then he strode out of the room. Before he closed the door to the suite, Robert heard him tell the guard outside, “make sure he doesn’t leave these rooms.”

Robert closed his eyes, trying to find some measure of composure. He was feeling dizzy, his head hurt from the hard slap, and he was sore and dirty from the demon’s attentions. But apparently, a long, hot bath was out of the question. He would do well to quickly get back to his feet and clean up at least a little so his master would find him in a pleasing state when he got back.

He had never been on the receiving end of the young Duke’s temper before but now that he had encountered it, he was very sure he did not want a repeat of the experience. And it looked like he would have to work hard to get back on his master’s good side.

With a groan, he forced himself to get up and make his way to the bathroom. If only his thoughts weren’t so muddled, he might have been able to consider how best to charm his way back into his master’s good graces. Concentrate on one step at a time. Thinking ahead was never a good idea for a pet. Just take what your master gives you and do the best you can. 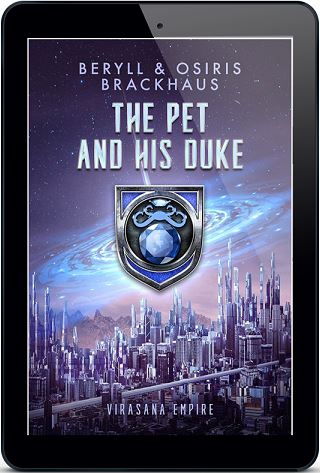 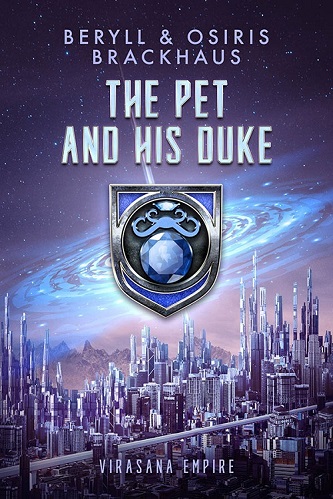 Title: The Pet and His Duke

Blurb: Robert is a pet, a human pleasure slave, and well past his prime.

‘The Pet and his Duke’ is a standalone m/m romance novel in the ‘Virasana Empire’ universe. Written by Rainbow Book Award winners Beryll and Osiris Brackhaus, it is a story of self-determination and love, and Happily-Ever-Afters in the most unlikely places. Warning: contains slavery, non-con and lots of fluff..

Review: Thomar never wanted to be a duke. He’d rather live his life adventuring as he continues to do. He decides to Purchase Robert, a pleasure slave past his prime. Robert is hoping this is the master that will keep him instead of letting him go.

These two grow feelings for one another while at the same time sleeping with other people, which honestly I did not understand how you claim to love someone and sleep with others. Thomar and Robert go on many adventures that have danger, torture, non con and creatures galore.

I honestly liked the story but the whole sleeping with others is not my cup of tea in the least. Aside from that it was an adventurous story with some humor, danger and wide variety of characters throughout that made the story worth reading more.