Hi guys! We have J.M. Snyder stopping by today with her new boxset The Positions Of Love Collection, we have a great excerpt and a brilliant giveaway so check out the post and enter the giveaway! ❤️ ~Pixie~ 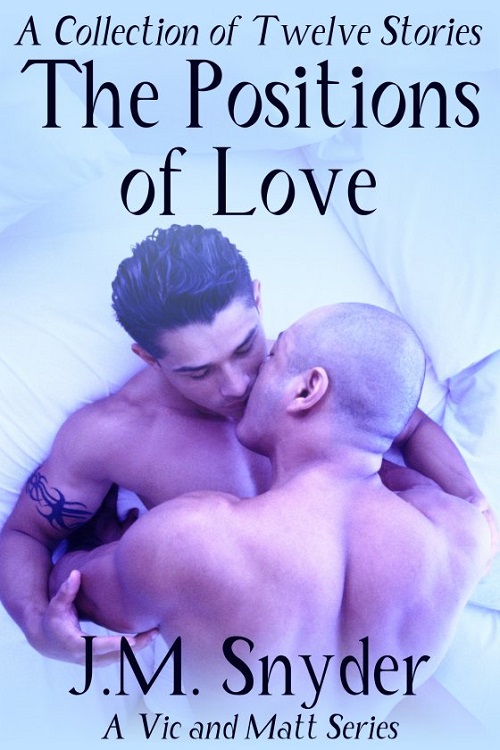 The Positions Of Love Collection

When Matt diLorenzo gives his lover, Vic Braunson, a copy of the Kama Sutra for Gay Men as a Christmas gift, they find it doubles as a handy reference guide to Vic’s super powers. All they have to do is test out the positions to see which one gives him what ability …

The Positions of Love: When Vic’s boss asks him to play Santa at the company Christmas party, the enticement of more time off sweetens the deal. It might be a wonderful holiday season after all … if he can only find the perfect present for his lover.

Two Pillars Position: Some mornings, Vic stops by the gym to bench-press a few thousand pounds, show off for his fellow bodybuilders, and spend some time with his lover before he has to start his day. A quickie in the pool showers seems like a good way to get the blood pumping …

Clasping Position: Though Vic had difficulty finding a suitable gift for his lover for Christmas, Matt has the perfect evening planned for Valentine’s. He’s made reservations at an expensive steakhouse for the two of them, and hopes the intimate dinner is a prelude to a night of love. But things get a little frisky before they leave for the restaurant.

Hammock Position: Spring is in the air, and Matt convinces Vic to join him for a little rest and relaxation on the sunny banks of the James River. What’s more enticing than sex on the rocks by the river’s rapids?

Two Dogs Position: Doggy style brings out the animal in Vic, literally. He finds out the hard way, when Matt invites friends over for a party. Vic’s heightened senses reel from the sights and sounds, and he locks himself away in the bathroom just to get his latest superpower under control. But what he hears in the apartment above puts the party on hold.

Cowboy Position: Matt diLorenzo has a secret fetish — he loves to watch a man eat. When Vic finds out, he suggests they share a quiet, indoor picnic. Something sinfully sexy, for just the two of them. On the menu? Whipped cream, fresh strawberries, and chocolate syrup drizzled over Matt’s bare skin for Vic to lick off.

Kneeling Butterfly Position: It’s a rainy Saturday and Matt wants to spend it at the mall. And what Matt wants, he gets. There’s only one little problem. He loves shopping; Vic does not. Still, the promise of sex in the dressing room sparks Vic’s interest.

Pillar and the Ivy Position: One of Matt’s favorite sexual positions, but he doubts his ability to support Vic’s weight as they make love standing up. He’s not the one with super strength, after all. Vic thinks maybe they could pull it off … in the gym’s swimming pool.

Tripod Position: It’s Vic’s birthday, and Matt wants to do something special. When he discovers his lover has a leather fetish and used to be into clubbing, Matt thinks it’d be fun to go out as a couple to celebrate his special night. But while Matt looks sexy in boyshorts, Vic isn’t the only one watching.

Lotus Position: When Vic has a few days off from work, the two visit Wildwood, New Jersey, a tourist town Matt used to frequent as a child. Though Vic isn’t keen on crowds and would prefer to spend his downtime at home, Matt entices him with the offer of sex on the beach … and he doesn’t mean the drink, either.

The Arc Position: It’s Halloween, and Roxie is having a party. Matt wants to dress as policemen but Vic’s latest power creates a costume all his own.

Sideways Position: For Thanksgiving, Matt takes Vic home to meet his parents. The diLorenzos aren’t quite sure what to make of their son’s lover. Matt’s Nonna tends to lapse into her native tongue without realizing it. Imagine everyone’s surprise when Vic answers her in flawless Italian. 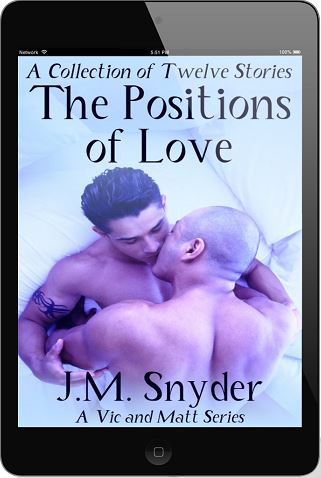 This would be their first Christmas together. Last year this time they had been friends, Matt hesitant to trust Vic more and Vic biding his time until Matt let him in. Even then, they had been moving toward a deeper relationship, one they didn’t consummate until after midnight on New Year’s Day. Three months later, the day after his thirty-fifth birthday, Matt announced he was moving into Vic’s apartment. They had been inseparable since.

Though he’s likely to leave me if I fuck up Christmas. The thought turned Vic’s stomach, and he craned his neck, trying to look beyond the cars ahead of him to see what the problem was. In the left hand lane, traffic moved at a sluggish pace, but the cars in front of Vic didn’t even budge. If only I were over there …

A nasty jolt shook him. For a second, Vic thought maybe he’d been rear-ended — his whole body surged forward as if jerked ahead. As the windshield rushed at him, he threw his hands in front of his face, shielding it. Motherfucker —

But he never hit the glass.

And suddenly someone beside him yelled, “Shit!”

Lowering his arms, Vic glanced around. He no longer sat in his own car-he was in the passenger seat of someone else’s. The driver next to him was an older fellow, Indian, with dark skin and wide, staring eyes that eclipsed his face. “What are you doing here?” he yelled. “Where did you come from?”

Good questions. Vic turned to look out the window and saw his car, now empty, several vehicles back in the right lane. How the hell did he wind up here? And how was he supposed to get back without making a scene? “Hey!” the driver yelled beside him. “I’m talking to you.”

“Then shut up,” Vic growled, trying to think. It had to be another one of Matt’s strange gifts. Why buy me something for Christmas? he thought wryly. Look what all you’ve given me so far. Super strength, telepathy, and now this. Vic had wished he could be in the left lane and poof! Suddenly he was, albeit in someone else’s car. So how did he get back to his own? Maybe if he just thought about it …

That jolt came again, this time from the front, as if he’d been hit by a deploying airbag. Vic closed his eyes, swallowed the bile that rose in the back of his throat, and hoped he stopped in the right car. What exactly was this power called? The ability to think of a place and appear there instantly. He wondered if maybe he shouldn’t start reading comic books again to learn more.

As the nausea passed, Vic opened one eye, cautious. He was in the right car, sitting in his own driver seat. With trembling hands, he put the car into gear, then maneuvered out of traffic onto the shoulder of the road. Some idiot drove up behind him, perhaps thinking he’d go around everyone else, but Vic ignored the horn that honked at him. Cutting off the engine, he flicked on his hazards and took a few deep breaths in an effort to calm himself.

Okay. So he could now … what? Teleport?