Hi guys, we have Charlie Cochet popping in today with her new audio release The Prince and His Bedeviled Bodyguard, we have a great excerpt so check out the post and enjoy! ❤️ ~Pixie~ 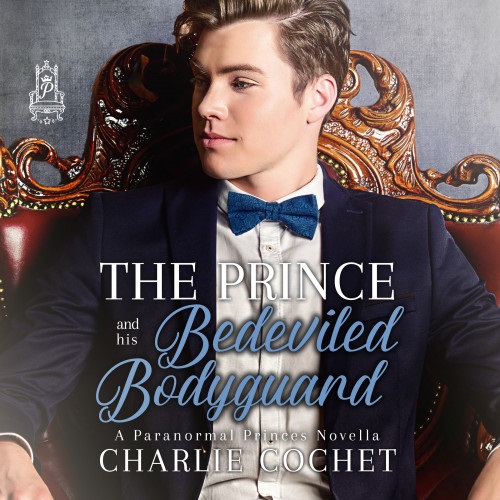 The Prince and His Bedeviled Bodyguard

Being a fierce predator—not at all adorable, despite my graceful stature—the last thing I needed was a bodyguard. Especially a wolf shifter, whose presence alone was an insult to my princely principles. As Prince of the Ocelot Shifters, I prided myself on my infallible feline instincts, uncompromisable dignity, and flawless fashion sense. If having a canine follow me around at all times wasn’t bad enough, I now faced the most important moment of my entire life. The time had come to prove I was worthy of my crown. If only I could find a way to get rid of the pesky bodyguard.

When the King of All Shifters asked me to guard Prince Owin, I admit I had no idea what to expect. Cat shifters tend to be a little intense, not to mention kinda cranky. Owin was no exception, though he seemed crankier than most. Being his bodyguard was proving to be one of the greatest challenges of my life—but not nearly as great as convincing him there was something special between us. When Owin is faced with a perilous quest to prove his worth, I was determined to keep him safe, even if the same couldn’t be said of my heart.

“What the—” Grimm dropped the orb, and we both jumped back. To my utter disbelief, it spread upward and sideways until it was roughly the size of a large doorway, a forest appearing inside. “Hmm. What do you know? A portal that will take us where we want to go.”

How cross would the king be with me if I accidentally pushed Grimm off a cliff? Or left him with the Cù Sìth? Not like he didn’t have plenty of wolf shifters. What was one less in the grand scheme of things?

Grimm narrowed his eyes at me. “You’re not leaving me behind.”

How did he do that? “Are you sure you’re not a seer wolf?”

Grimm didn’t look impressed. “You’re right. I’m a seer. My curse is that I’m limited to visions of you being a jerk.”

I opened my mouth to respond, then thought better of it. “Can we just go?”

“As you wish, Your Highness.” He bowed and motioned for me to go ahead. Clearly, he thought I was an idiot.

“What if it’s a trap and I step through and burst into flames? You go first.”

“Your generosity knows no bounds, my liege. Fine. I’ll go first, but if I meet my demise, my blood is on your hands.”

“So mean.” He shook his head at me and stepped through. On the other side, he turned and held his arms out. “See? All good. Wait….” He gasped and clutched at his chest. “What’s happening to me? It burns!”

“Grimm?” My heart lurched in my chest, and I stepped up to the portal.

“Can’t what!” Oh my Goddess, oh my Goddess. I never expected him to actually burst into flames! I flailed around feeling utterly helpless. “What do I do? Is it flames? Are you bursting into flames?” I frantically looked around. “I don’t see a fire extinguisher!” Not that I knew how to use one. I’d just have to toss it at him and hope he could do it himself.

“I’m going to kill you!” I darted into the portal, ignoring his laughter as he took off, his long legs putting him out of my reach in a heartbeat. “I hate you!”

“Admit it! You were worried about me,” he called out from across the field.

“Worried you’d die and I wouldn’t be able to pry the magic purse off your cold, dead, dog-smelling corpse!” Charlie Cochet is the international bestselling author of the THIRDS series. Born in Cuba and raised in the US, Charlie enjoys the best of both worlds, from her daily Cuban latte to her passion for classic rock.

Currently residing in Central Florida, Charlie is at the beck and call of a rascally Doxiepoo bent on world domination. When she isn’t writing, she can usually be found devouring a book, releasing her creativity through art, or binge watching a new TV series. She runs on coffee, thrives on music, and loves to hear from readers.