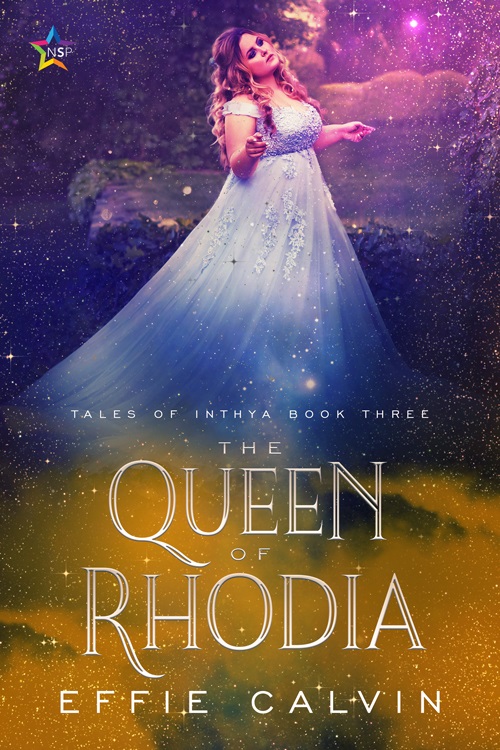 The Queen of Rhodia, Effie Calvin © 2019, All Rights Reserved

Queen Gaelle of Rhodia—Great Mother of the Silence of the Moon, rightful owner of half of her country’s marble quarries, and wife of King Alain—regretted that she was not a dragon.

It was not just for the obvious reasons: the terrifying size, the ivory teeth, the breath of fire, and the gift of flight—though that certainly would have been reason enough. What Gaelle really envied was the dragons’ abilities to lay eggs. What she would not give to be able to eject a child from her body and go about her business while it lay in a fireplace for a year!

But it was not meant to be. And so, grudgingly, Gaelle had her children in the ordinary way. Her only comfort was the fact that she could hand them off to the nursemaids until they were old enough to hold an intelligent conversation.

Her eldest son was Gael, crown prince and heir…and the only one of her six children whose name she could recall at any given moment. Gaelle disliked children greatly, but as Gael grew into manhood, his temperament pleased her. He was strong and solemn, as unshakable as a mountain. Like his father, he was blessed by Iolar, with a knack for detecting trickery, and had discovered every hidden passageway in the palace by the time he was ten years old. He would make an acceptable king someday.

Next was Eloisa, firstborn daughter. She had Talcia’s magic, as any princess of Rhodia should. Like her brother and her father, she was even in temperament, with none of the shrieking rage that Gaelle was sometimes known for, though that was not to say she was not capable of vengeance. When it came to her blessing, her self-control was excellent and her magic a sparkling shade of ruby. If, Talcia forbid, something should happen to Gael, she would be a suitable replacement. If not, she could be married to another member of the Rhodian nobility for the sake of strengthening alliances.

Eloisa had been followed by Matheo, second-born son. Gaelle could see no reason that her other children should not be regents. They could spread her power across Thiyra, and perhaps further still. When Matheo was only a year, she signed an agreement that he would wed the three-year-old princess of Dossau when the two came of age. Matheo was educated in the ways of Dossau as well as Rhodia to prepare him for the foreign throne he would ascend someday.

Next came Esolene, similarly promised to the prince of Eskas and educated appropriately. Her blessing, the color of a sunset, was not as powerful as Eloisa’s, and so Gaelle would not be sad to send her off. Esolene was thin and fragile, with little outward passion. Gaelle had been disappointed at first, but then out of the corner of her eyes, she noticed things that piqued her interest—a tongue like a driver’s whip, little fingers that pinched and twisted, a foot that occasionally stuck out at just the right angle to send sisters or servants sprawling—and all this hidden behind a watery smile.

The following year brought Esofi. Gaelle sent ambassadors to Xytae, to ask the Empress Irianthe if she would agree to a betrothal between Esofi and her son, Ionnes. But the Empress rejected the proposal, citing that the age difference between their children was irreconcilable. So instead Esofi was betrothed to Albion, Crown Prince of Ieflaria. Esofi had a placidity that bordered on laziness, but her mastery of magic came to her as easily as breathing, and she could perform maneuvers that the older princesses could not, even with a half-eaten biscuit clutched in one chubby hand. She killed her first wyvern at age eight, her first elf at fourteen.

And last of all was Esybele. All babies were the same in Gaelle’s eyes, shrieking and squalling, but this one seemed to do more of that than most. If not for the nursemaids, Gaelle might have put a pillow over the girl’s face and let Adranus sort her out. When Esybele learned to speak, she had a carefully chosen insult for everyone who crossed her path. Furthermore, Esybele was not above throwing herself on the ground and beating her fists if she felt she had been wronged, screams ringing through the marble halls.

Gaelle frequently thought of the Empress of Anora, across the sea. It was said she not only had two husbands, but also three wives. That, Gaelle supposed, must have made the production of heirs terribly convenient. She could not imagine how many alliances she could secure with that many offspring! She had never received a satisfying answer to that question and suspected the priestesses did not know.

Thiyra was a small continent, a stony beacon in the midst of grey seas. It could take months, even years, for news of other lands to reach it. So the tale of what had happened in Ieflaria did not reach her until Duchess Tiphanie’s daughter arrived back home.

On that evening, Gaelle stood before a fireplace with a glass of red wine, wishing she was out with the mages hunting elves who strayed too far from their own shores instead of trapped in her own palace with reports to review.

When Tiphanie knocked at the door, Gaelle could not even bring herself to pretend to be irritated by the distraction. She watched as the duchess entered the room, followed by a younger woman.

“My Queen,” said Tiphanie with a curtsy. “Forgive the intrusion at this hour, but my daughter has just returned with…shocking news.”

Gaelle turned her gaze to the girl, who was still dressed in her travelling clothes, and found she could recall nothing about her.

Tiphanie touched a hand to Lexandrie’s shoulder. “Go on,” she said. “Tell her majesty exactly what you told me.”

Gaelle pursed her lips, somewhat disappointed. After an introduction like that, she had been anticipating something interesting. “Is that all?”

“No,” said Tiphanie. “Perhaps…perhaps my queen ought to sit down.”

“Be silent,” commanded Gaelle. Then she looked at Lexandrie. “Continue.”

“He is not a child,” Lexandrie glanced at her mother anxiously, who only gave a nod of encouragement. “That is…Esofi’s son…he is a dragon.”

The wineglass fell out of Gaelle’s hand and shattered on the floor.