Hi guys, we have Katey Hawthorne popping in today with the tour for her new release Rise of the Virginie, we have a great new excerpt and a fantastic giveaway so check out the post and enter the giveaway! ❤️ ~Pixie~ 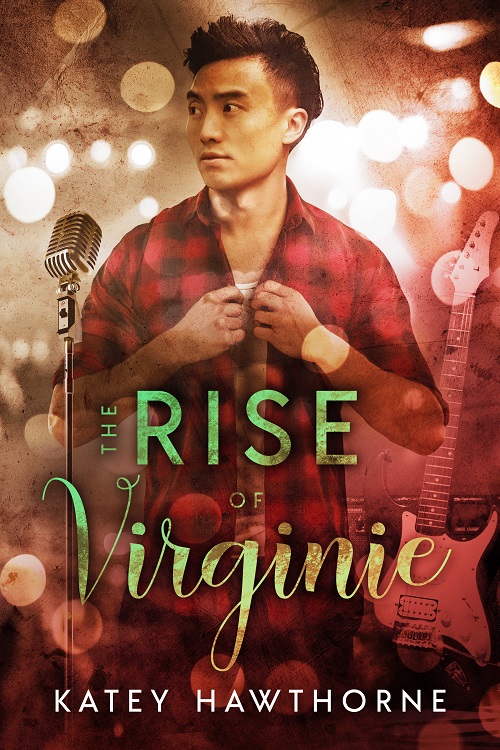 “C’mere.” Han picked up a random guitar that was settled against the wall and handed it to me. It was a steel-string acoustic Alvarez like his, way more action than I was used to, but nice. “Use this. I’ve had a tune in my head all day.”

Then it hit me just how fucking brilliant he was. “A new song.”

I wanted to tell him I loved him, but it scared me, so I just sat down with the guitar. “Sing for me.”

“It’s just a little bit of a song right now. A first line.” And he sang, “We’ve got a little secret, baby… It’s just yours and mine…”

I found the chords he needed, picked out the melody, then wrapped a riff around the chords like we always did. It came in waves, kind of, the melody coming and going, washed-out and dreamy. I hummed the next line, even though I didn’t know what the words would be, running with it.

He nodded, eyes bright and serious, and added the words to bring it to life.

We’ve got a little secret, baby

It’s just yours and mine

“Hot.” If I sounded enthusiastic, I was. As usual, the sound of his honey-warm voice diving through my music was doing all the good things to me. My blood always heated, my heart always pounded, and my dick… well, my dick was a fan, for sure. Hey, he was the poet.

It doesn’t matter if I win or lose

If there’s one death I could choose

I’d end it all for one more time

I’d end it all between your thighs

“Dude…” My voice cracked, and I stopped playing.

Han flushed, which was rare when he was in rock-star-songwriter mode anymore.

“How long have you had this one?” I asked.

“Since the other night. You were coming back from the bathroom, and I thought…” He gave a helpless little laugh that made me want to jump him even harder. He moved the stool he’d perched on closer to me, then reached out to settle a hand on my thigh. “You look good naked. And we’d just been doing that thing where you wrap your legs around me?”

Not enough time for everything I wanted to do to him right then. But enough for one or two, for sure.

“And I thought, I’d stay in bed all day if I could have those legs wrapped around me.” Han leaned in closer and kissed my ear.

I broke out in goosebumps and turned to catch his mouth. We kissed for a second, slow and hot, over that guitar that wasn’t mine.

Then Han pulled back, his voice lower and rougher than before. He squeezed my leg. “I thought of that old saying about Alexander the Great, you know? That the only battle he ever lost was to Hephaestion’s thighs.”

I snorted out a laugh. “I never heard that one, but it’s hilarious. That was his… boyfriend?”

That look always meant I was gonna get laid. Hell, I’d do it right here, giant window to the empty booth or not, if he’d let me. How else could I show him… show him everything?

“You’re the only thing that could keep me away from everything else,” Han said. “And I thought, that’s worth writing a song about. At least that might get us out of bed.”

We laughed, then kissed again, this time a little longer. As we closed it off, I bit gently at his puffy bottom lip, and he gave a little moan that made my balls go tight.

“We have to finish the song,” he whispered.

“I know,” I admitted. “But I am gonna do some dirty, dirty shit to you tonight when we get home.”

“Please.” Another chuckle from Han. “Please, do.”

“What’s the song called?” I asked.

His smile almost went smirky when he said, “‘Hephaestion.’”