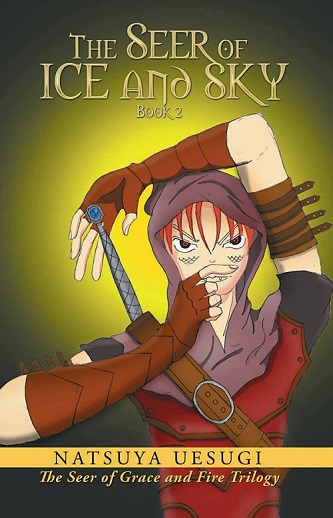 Title: The Seer of Ice and Sky

Series: The Seer of Grace and Fire 02

Blurb: Surviving the devastation of DarkFall, Timorn is now rightful King of Faerie. With evil lurking at the fringes between the kingdoms of the humans and the elves, the dark mage Dalannin travels to Dragonreise to forge an alliance with the Dragon King. Timorn’s travelling party sets off on request from an elven emissary but dissent grows as the party passes through the human city of Ekhrine. As they stop at the Ecclesiastical University where the cleric Kabal translated The Legend of Arden prophesy, a demonic aura haunts their path. Can Timorn forge an alliance with the dragons to ensure peace or will darkness drive a wedge between him and his magical twin Ethesian as they journey through the elven lands.

Review: Timorn is having trouble with his being king but an emissary unexpectedly shows up wanting Timorn and his group to come with him to the dragon King. Meanwhile Dalannin travels toward the same goal as Timorn. I liked the different POV’s throughout this adventurous story.

The path is fraught with danger around every corner. An interesting mix of characters are inter-spaced throughout this magical and highly engaging book. I loved everything about the story as it progressed further.

Timorn and his sister are at odds with one another due to Timorn and it shows in the way they interact with one another at times. Seih a captain of the dragon militia and the half dragon proves his worth over and over again and takes his duties seriously.

There is a lot that happens along the journey both good and bad. I was on the edge of my seat at times awaiting the outcome.