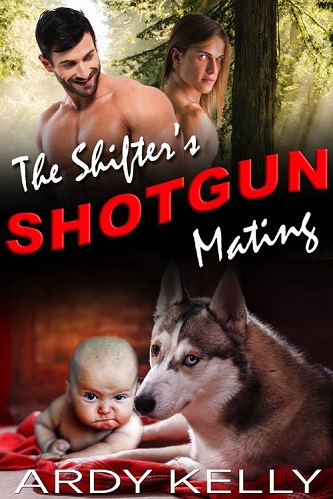 Blurb: The only way out of Pine Hollow was to mate the alpha who didn’t want him.

Adam knew bounty hunting in another pack’s territory had risks, but being at the end of a shotgun for a forced mating was not one he expected. At least it wasn’t permanent. Once he paid the promised cut of the bounty the leader of Pine Hollow would dissolve the mating. Adam just needed to keep his hands (and his teeth) away from the enticing omega.

Ricky knew nothing about the outside world, but he knew his days at Pine Hollow were numbered. The barren, widowed omega’s best chance for survival was to find a mate at Lone Wolves Ranch. Anyone would do. Anyone but the ornery wolf who bit him. Adam said he didn’t want a mate, so why was he acting like a knot-blocker?

The Shifter’s Shotgun Mating is the second book in the Lone Wolves Ranch series of slow-burn M/M shifter Mpreg stories. It can be read as a stand-alone though secondary character’s lives continue from The Cub Club.

Review: Adam is part of a bounty team of paranormal’s for hire. Adam is fierce and loves his job. He’s on a mission to take in Gus, a known murderer. When he travels through Pine Hollow the local alpha insist he take someone with them so they can collect some of the reward as well since they will be in their territory. Things go bad when that person, Rock is killed. Adam and a few of his crew are injured and the alpha of Pine Hollow insists that he mate Ricky, Rock’s widow until they catch Gus.

I was glad Ricky got out of the situation with Pine Hollow. I genuinely felt his amazement at the world past Pine Hollow considering he never stepped foot outside their territory. It tickled me how Adam would get jealous at the other wolves around Ricky. it was just what he needed to see what was right in front of him and to stop fighting his feelings.

Fantastic read with plenty of laughs, romance and action.