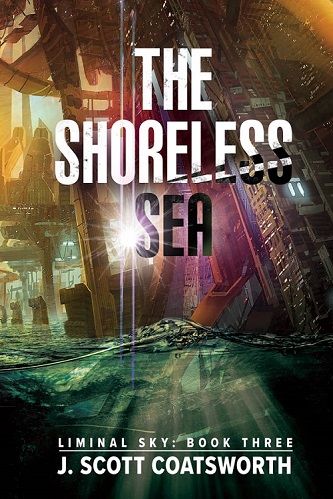 Blurb: As the epic trilogy hurtles toward its conclusion, the fight for the future isn’t over yet. It could lead to a new beginning, or it might spell the end for the last vestiges of humankind.

The generation ship Forever has left Earth behind, but a piece of the old civilization lives on in the Inthworld—a virtual realm that retains memories of Earth’s technological wonders and vices. A being named Lilith leads the uprising, and if she succeeds in setting its inhabitants free, they could destroy Forever.

But during the generation ship’s decades-long voyage, humanity has evolved. Liminals with the ability to connect with the world mind and the Inthworld provide a glimmer of hope. They’ll have to face not only Lilith’s minions, but also the mistrust of their own kind and persecution from a new government as homotypicals continue to fear what they can’t understand.

The invasion must be stopped, the Inthworld must be healed, and the people of Forever must let go of their past and embrace what they’re meant to become.

The Shoreless Sea is not a book that can be read as a standalone it must be read in order, the previous two books, The Stark Divide and The Rising Tide has the world building and some events that lead to this book, it will also help to understand the circumstances of characters when they later appear in the book.

Andy is again a central figure throughout the book, with her children Kiyrn & Belynn leading the charge in both part 1 & 2. There are an assortment of characters that we are introduced to throughout the story who add their own unique experiences to the storyline.

I’d love to go into great detail about this wonderful story but I think my head would explode so I’ll give you the basics, the Inthworld is dying and Lilith is determined to survive, she leads an uprising and it’s up to the Liminals to stop her (it is so much more intricate than that but like I said head explodes). Then there’s Government trouble where a bitter person decides that the Liminals are the reason for all their woes.

The story is wonderfully written dragging you into a situation far in the future, filled with characters who are diverse and unique. The world building is yet again exceptional; descriptions are written in such a way that you can imagine being there experiencing events along with the characters.

The one thing that stuck in my mind more than everything else is humanity just can’t seem to break its cycle. I mean here’s what is left of humanity in an ever growing world with a complete fresh start and in less than a hundred years there’s orphan kids living on the streets, drunks passing out in front of pubs and politicians trying to crush those that they hate. I would hope that humanity would learn its lesson but I have a fear that J. Scott Coatsworth is just a bit prophetical.