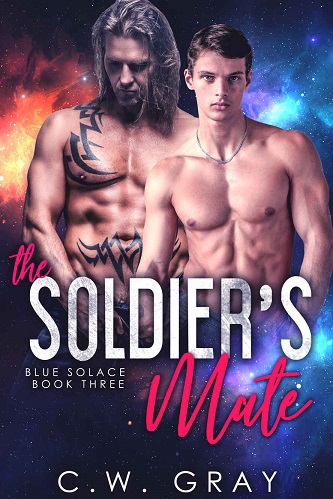 Blurb: Morgan Murray is an easy, fun-loving guy. He excels at being a soldier, but never wanted more out of life. Somehow, he ends up in a position of authority on Dru’s new ship, the Blue Sparrow. Now he has to deal with what he dreads most. Responsibilities. Dru and her crew are given the task of finding Wyatt Morrick and telling him about his father’s death. Along the way, Morgan soon learns that responsibility can be painful, difficult, and frightening. It can also lead to something very special.

Author’s Note: 55,000+ words. This is a m/m love story with no angst and no cheating, just a HEA. There is lots of action, sex, mpreg, and a few potty mouths involved in the story. 18+ readers only, please. It is also the third book in a series that is best read in order. Read “The Mercenary’s Mate,” and “The General’s Mate” first!

Review: So much happens in this story as Wyatt and Morgan come to terms with different things going on their lives. There are twists and turns around every corner as you traverse through this exciting story. Many characters make an appearance as book progresses.

I liked that we found out what happened to Morgan. Trying to fend off attacks while getting closer is no easy feat for Morgan and Wyatt. I liked the added details into both men.