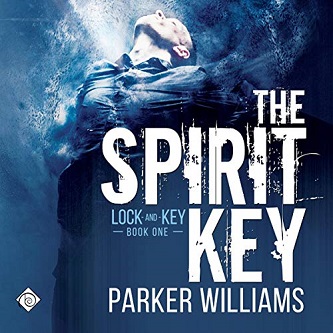 Blurb: When he was eight years old, Scott Fogel died. Paramedics revived him, but he came back changed. Ghosts and spirits tormented Scott for over a decade until, thinking he was going mad, he did the only thing he could.

He ran – leaving behind his best friend, Tim Jennesee.

Scott’s had five normal, ghost-free years in Chicago, when the spirit of Tim’s mother comes to him and begs him to go home because Tim’s in trouble and needs him.

He isn’t prepared for what he finds when he goes home – a taller and sexier Tim, but a Tim who hasn’t forgiven Scott for abandoning him…a Tim whose body is no longer his own. The ghost of a serial murderer has attached itself to Tim, and it’s whispering dark and evil things. It wants Tim to kill, and it’s becoming harder for Tim to resist. To free the man who has always meant so much to him, Scott must unravel the mystery of the destiny he shares with Tim.

Review: The Spirit Key is the first book in Parker William’s paranormal series, Lock and Key. The audio narration is performed by Collin Darcy.

I don’t have a heck of a lot of experience when it comes to Parker Williams. I think I’ve only ever read one or two books by the author, books that from memory I know that I enjoyed them for reasons that escape me at this point in time. I also have much the same opinion of Collin Darcy as the narrator, I know that I’ve heard him narrate at least a couple of audio books before but nothing immediately comes to mind. So, I’ve effectively come into this book blind and with no expectations.

Overall, I found this a rather enjoyable story, although I admit that I found it a tad slow in parts. I really enjoyed the way Williams told the story, first starting in flashback before picking up and telling the story. I felt that the voice and tone of Collin Darcy really complimented the personalities of the characters. It certainly enhanced the story for me and particularly enjoyed the voice he gave one of the MCs, Scott.

I don’t want to go too much into the story, because I feel that the blurb tells the reader everything they need to know and I don’t want to spoil anything terribly. There is a lot of internal battles and self-discovery that dominate much of the book, as well as exploring the evolving relationship between the two MCs. You can’t say that there is no character development, because there is so much depth and complexity to these character. Unfortunately, I just felt that there were times where I was missing an emotional connection to either MC.

The story is mostly told from the POV of Scott Fogel. He starts the book by going through the events of his childhood, specifically from the moment where he had drowned in an accident before being revived, that led him to leave his family and friends behind and ran away to Chicago. It’s a really sad and heart breaking start to a story, he details his trauma while he is dealing with the talent that came about after he drowned, the ability to see and communicate with ghosts/spirits. But the death of his best friends mother brings her ghost telling him he needs to go home and help his friend. And so he does.

Scott arrives on the doorstep his best friend, who he happens to love, Tim Jennessee. Adding to the stress of having to confront the people he ran away from, after not seeing any ghosts while in Chicago, the dead are once again appearing to Scott. It’s a rocky start, but Tim’s heart isn’t totally hardened to Scott. It’s more that he spent five years worrying and grieving over his friend, unsure of what to think. Then Scott reappears.

It takes time for these guys to get on track and that’s when the next major part of the plot kicks in. Scott discovers that an evil spirit has latched onto Tim and his working on making him weaker until it can make Tim his instrument to kill. But there is a mystery that begins to unravel, relating to Scott’s talent and Tim’s mother. It’s an interesting turn.

I’m interested to see what happens next in this series and where it will take us.