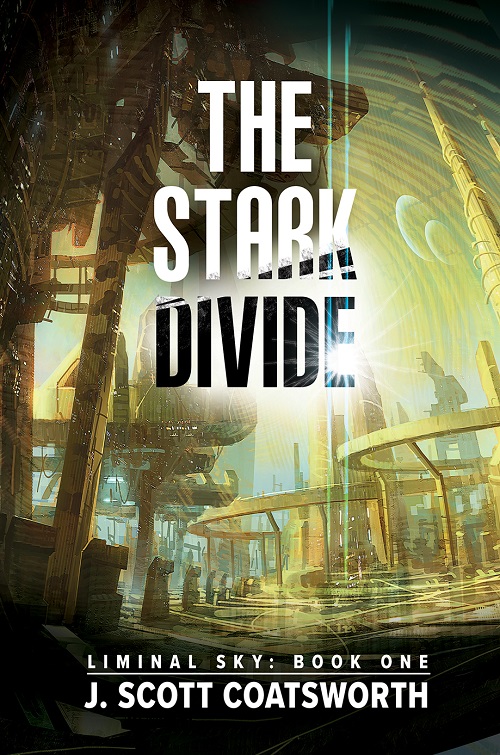 Blurb: Some stories are epic.

Review: The Stark Divide throws you into the stars as Earth races towards extinction. Humanity takes one last grasping chance to save themselves even as the world dies around them because of their stupidity, and even in the dying last breaths they continue throwing nuclear missiles at each other and condemning the entire species.

J. Scott Coatsworth has written an amazing science fiction novel that sends shivers down your spine because of the ring of truth to it.

The setting of the story is a living world/ship that’s an amazing combination of organic/technology with an artificial intelligence that is more than it seems.

The story starts from the very beginning of Forever’s life when she’s still a seedling and the amazing crew who first ‘plant’ her. The Dressler’s crew, Captain Colin McAvery, Anastasia Anatov scientist and creator of the seedlings (Forever) and Jackson Hammond ship’s engineer, have the important task of ensuring that the seedling is planted on an asteroid so it can begin growing so it can save a portion of humanity. The problem is something’s wrong with the Dressler and it’s a race against time.

The story then jumps in time with Colin, Anastasia and Jackson’s son Aaron meeting as Forever is being colonised for human habitation. It’s a fraught time as truths come out and Forever doesn’t forget grudges.

The final segment in the story is 30 years on from Forever’s birth, while Forever still isn’t quite big enough or ready for mass human habitation the Earth is failing, and refugees are flocking to Forever.

This really is an amazing story and while it has gay, lesbian and Trans characters I would actually say that this is a more mainstream story. There’s no romance and no one character to focus on, the story is about Forever’s journey with the stories of some of the humans who are important to her survival coming through.

The world building is absolutely amazing; we get to see a new world emerging through determination and survival instincts, we get to picture through the authors words exactly what a new world for humans might be like, living inside that world… it’s just amazing.

The characters each come to life, their hopes, dreams, fear, anger, desperation and shame comes through brilliantly, we are left in no doubt as to what the characters are going through.

This isn’t your usual science fiction story, there’s no danger other than that brought on by humans stupid actions, there’s no aliens racing to help humanity, there’s no devastating natural world event, there’s no nicely timed rescue of Earth. It’s a story of amazing ingenuity, characters connected by the beginning and shear survival instincts.

I recommend this to those who love deep science fiction stories, who adore a storyline that pulls you along in its wake, who love interesting characters, and an ending that is also a brand new beginning.