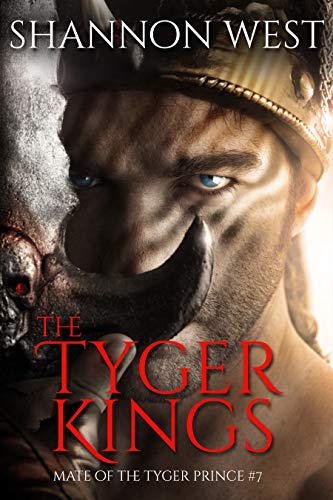 Series: Mate of the Tyger Prince 07

Blurb: The fallout from Derrick’s union with Rhaegar and Blake’s aid in his son’s elopement has been intense, to say the least. After a blistering brawl between Blake and Davos, Davos leaves Blake, because he isn’t ready to forgive him, and most shockingly of all, he says he isn’t sure he even wants to.

Blake is frightened and hurt by his actions, but terribly angry. He follows the king back to Tygeria, if only because Davos had the gall to take their two younger children with him when he left. His ship is slower than the king’s, though, and when he arrives back on Tygeria, he finds the king has left again, on a wild chase after his errant son and his pirate mate. Even worse, he makes a unilateral decision to send their son Larz to a faraway planet for military training, against Blake’s express wishes.

When Davos, Derrick and Larz all go suddenly missing, Blake attempts a rescue mission, but encounters a strange wormhole in space, and is flung through it to crash on an unknown planet called Tveir. Strangest of all the planet is populated by Tygerians and their handsome king. Injured and disoriented, Blake begins to feel as if he’s trapped in some crazy story. Except this isn’t any kind of story at all—this is Blake’s life, and the plot has just taken an unexpected, heartbreaking and totally infuriating twist.

Review: Blake and Davos have one hell of a fight after Blake helped his son escape with Rhaegar. So much so that each man said something horrible, but Davos even more. Then he leaves Blake on one planet and heads home, but of course Blake is going to follow. Especially since Davos took their two youngest back with them. When Blake makes it back home, it is to only find out Davos went to find his son and son’s husband. Blake is pissed and going to get them all back. To bad the trip doesn’t go as plan, think alternate universe.

Too bad Davos and Rhaegar are not the same when they crash. Now it is going to take Blake and Derrick all they have and know to get them all back home. Might not be as easy as one thinks.

This story is a great idea but failed to deliver for me. It was hard to follow especially in the beginning. I knew right off the bat about alternate universe but to think that if they lived there, then the ones that come through the wormhole are basically emerged in to one. With very few memories of the lives they led before they ended in hell. I guess it should be called parallel universe, but still strange. The only reason Blake and Derrick remember all is because they never lived in the new world, so to speak.

I knew why Davos was the way he was, but it made the story drop quite a bit for me. He didn’t make it up when Blake finds out he is pregnant. However in the end he does make up for being an ass. However it was a bit too late for me to even truly like it. I was a bit disappointed in it. I can honestly say that this is not one of those memorable stories. I can also tell you that this is one of those books that I will probably never read again, which was not a good sign for me.

Over all the story is well told, fast paced but also mixed with a slower pace in some parts, danger filled and action packed. It is an entertaining story but was just to much stuff in it that made it dull for me.