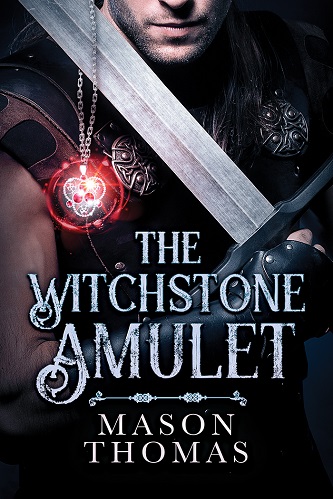 Blurb: Protect it at all costs.

That’s what rugby player Hunter Best’s mother told him before she died. But when Hunter surprises an intruder in his Chicago apartment, he discovers her amulet stolen. Hunter pursues the thief—all the way through a strange vortex. He wakes in a bizarre and violent world, a benighted realm on the threshold of civil war.

The queen has become a ruthless tyrant, punishing any who oppose her, weakening the kingdom’s defenses against the brutal Henerans. To survive, Hunter must depend on the man who robbed him, a handsome former spy named Dax, now a leader of the resistance that believes the queen is an imposter—a Heneran disguised by magic… who also looks identical to Hunter’s mother.

There’s no love lost between Hunter and Dax, and even if Hunter grudgingly agrees with the resistance, he just wants to reclaim his property and go home. But he might be the only one who can oppose the queen and end her reign of terror.

Review: Hunter Best has his mothers amulet stolen from him one night. Not one to sit around and do nothing he takes off in hot pursuit of the thief only to follow the man into another world he never knew existed. Dax is the man that steals the amulet. Dax and his fellow rebellion members need it to make the impostor queen reveal her true self.

Hunter soon realizes this world has many dangers. He’s not trusted but as time goes by without getting any closer to a way home he decides to help the rebellion. Danger is around every corner and the slightest misstep can get you killed. I liked the story.

The characters were intriguing and engaging. The plot was awesome as it draws the reader deeper into the mysteries throughout. Twists and turns and many close calls of danger left me on the edge of my seat.