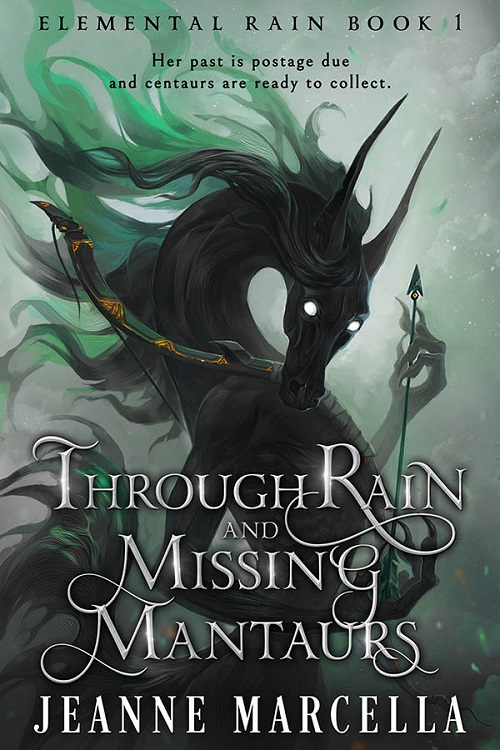 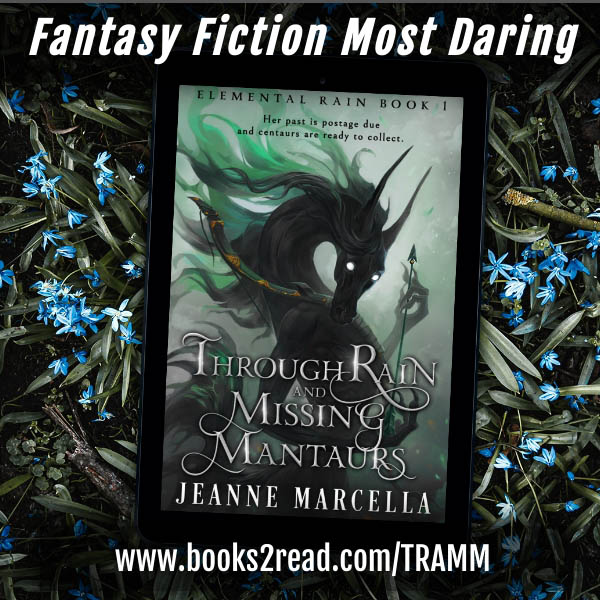 Saddle-sweating, horse-humping, gods-cursed bastards! The rumors were true. Shit! Bad luck must be in love with me or something. Maybe it could give Mardyth lessons.

Arms pumping high and heart hammering in her parched throat, Pony pushed to reach her top speed. The rumble of centaur hooves behind her vibrated both earth and air. She absorbed those rumbling shock waves into her svelte, bipedal runner’s body. And knew her two human legs—versus their four equine ones—would not be enough.

Still, she would try.

The sweltering heat weighed heavy. Her ratty brown and tan courier’s tunic clung like a starving tick. Rocks and pebbles further split the threadbare soles of her worn-out boots as she pounded down the rutted road. She grimaced at the sweaty slap of calloused arches sliding around in rotted footwear that could fall apart any day now.

Pony squinted at the onslaught of bright blue sky. Her brain cooked in its own juices as the summer sun withered the forest corridor. Her brown hair slipped from its limp topknot; stray strands plastered her sunburned cheeks. It was almost too hot to breathe. Too dry to live. And the damn fools giving chase wanted to die of heatstroke right alongside her.

As it always did in situations like these, Callum’s unfavorable input surfaced to harass her. Stupid, gods-damned centaurs—worthless scraps of horsemeat to toss to the dogs. Her former guardian’s mantra, though crude and offensive, might hold slivers of truth. It was most certainly stupid to be running full-out in this blistering heat. At any other time, she might’ve been curious about this, her first ever centaur encounter.

Give a lecture about overexertion in extreme weather.

Maybe engage in some harmless flirting.

To finally decide, once and for all, that Callum was right about them.

But not when this chase proved that they were hunting for courier blood.

Six tall shapes, the merging of man and equine. Hooves kicking up clouds of rising dust. The whip of long, flashing manes. The distance between them shrank with each passing second.

Her mail satchel, empty except for the meager bait of Escape Plan Number Two, bounced against her spine. Slung across her chest and anchored into the strap of her mailbag, a dozen small throwing blades awaited use. The large knife hanging at her hip, anchored at her thigh, allowed slight consolation.

Escape Plan Number One took the form of the few coins she couldn’t spare; the bits of metal jingled in her trouser pocket, muffled by a scrap of cloth.

Your job is to run, but hold strength in reserve. Callum’s voice echoed in the back of her mind. If cornered, kill without hesitation or remorse.

Okay. Good advice. She was good at running. That was all she ever did.

Pony crushed dry cracked lips between her teeth. Escape Plan Number One never failed. But would this tactic work on centaurs?

Wait. She had to revise that. Would Escape Plan Number One work on murderous, marauding centaurs who’d probably noticed she was a half-breed suffering through the last few days of her estrus?

If Callum were alive, he would’ve wagered against her.

Might as well give the plan a go, Horsemeat.

She sensed the distance closing between them. Imagined their hot breath blowing down the back of her neck. Their tall, bizarre forms hovering over her. Their hands tearing at her tunic to confirm the hidden tail braided and wrapped around her waist like a belt…

Pony shook off the terror. No time to panic.

Dipping into her trouser pocket, she pulled out several bronze skull coins and flung them over her shoulder. It was back to rummaging through garbage cans when she got home. The currency thudded along the highway and pinged off rocks. On her old southern routes, tossing money always worked with the undesirables skulking around looking for a mark.

The thundering sound of hooves sped up and deepened. Pony ground her teeth. All right, so they weren’t after money. Not typical highwaymen then. Why couldn’t they be greedy bastards like everyone else?

Reaching into the mailbag, Pony pulled out the four carrots she’d pilfered from the company stables. She glanced at the vegetables, shrugged, and took a bite out of one. Then she proceeded to fling the orange darlings over her shoulder in two-second intervals.

Oh well. It’d been worth the try. Maybe they weren’t all animal after all. Or maybe centaurs were fussy eaters. Maybe she should’ve grabbed a salt brick instead. Then she could’ve brained them with it.

The road continued to bend, the thick forest jutting into her direct line of sight. She darted for the ferns and scrub brush. Towering pines blotted out some of the sun’s glare—for a few seconds she was running blind.

Two centaurs armed with longbows jumped out in front of her. The younger one took aim at her heart.

Horseshit! She was speedy, but not quick enough to outrun a flying projectile. Gulping, she dropped into a slide, feet first. Gravel tore open her calloused palms and ripped holes into the back of her trousers.

Great. Bleeding in several places, and now she had clothes to repair. “Arggh!” She slammed slick fists to the ground. “What’s wrong with you swag-bellied tail-waggers? You’d shoot one of your own?” 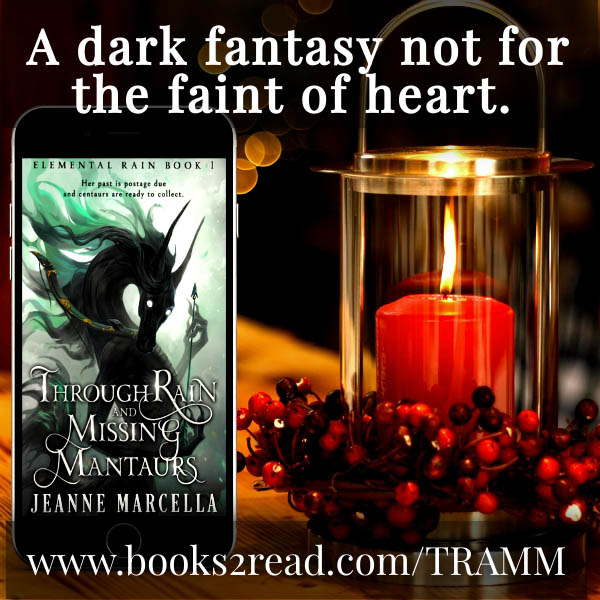 Jeanne Marcella writes dramatic, and often character driven fantasy fiction not for the faint of heart. Quests, adventure, danger, and the grit of living are foremost, but relationships and mild romance might also share the pages.

Granted unlimited access to books at a very early age via the library, she quickly acquired a fondness for creating her own stories through word and drawing. She was born and raised in the San Francisco Bay Area. 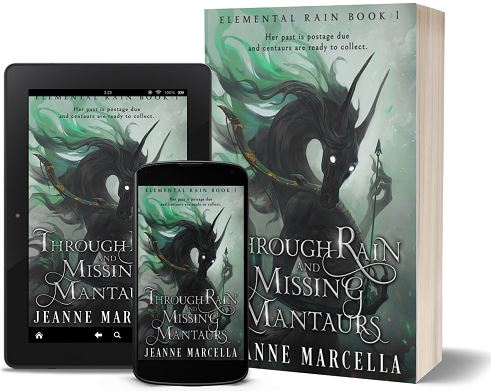 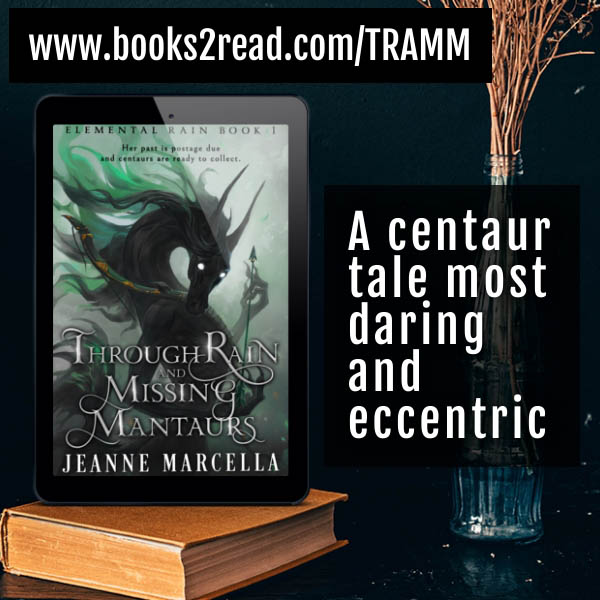