Hi guys! We have C.B. Lewis stopping by today with her new release Time Taken, we have a great excerpt and a fantastic $10 NineStar GC giveaway so check out the post and enter the giveaway! ❤ ~Pixie~ 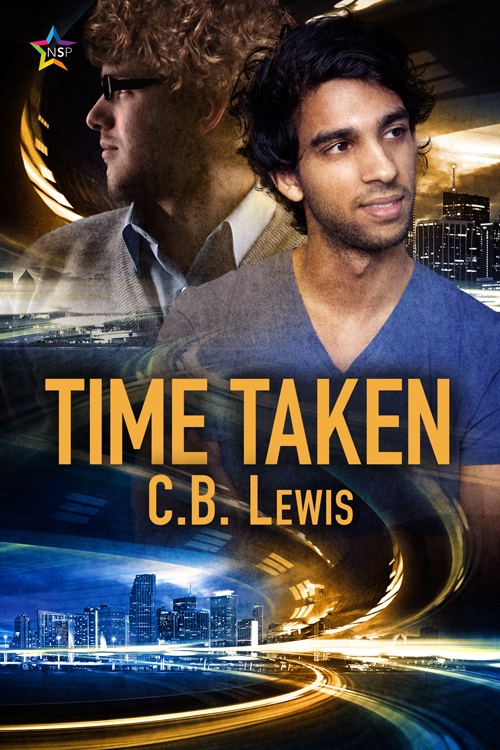 Time travel is a precarious business at the best of times, but when Qasim El-Fahkri’s mission to the past ends in violence, it has a ripple effect through every level of the Temporal Research Institute.

Rhys Griffiths finds himself caught in the wake of the disastrous jump, his own career uncertain. With the Supervisory Board breathing down his neck, operatives demanding answers to baffling questions, and life outside of work bearing down on him, his only respite comes from Qasim’s company. As the professional slowly becomes the personal, they must confront the echoes of their own pasts to try and move forward in the future.

But another past is waiting for Qasim, and there may be no coming back from this one…

For full enjoyment, it is recommended to first read books 1, Time Waits, and 2, Time Lost.

The rain had finally stopped. The cobbles gleamed in the hazy moonlight, dappled with the warmer glow from the windows of the houses. It was late enough for the streets to be deserted, and the marketplace was silent.

Booted feet tramped by through the streets.

Half a dozen Janissaries. Members of the Sultan’s elite guard. All armed with swords and guns. In better days, they would have been a comforting sight. Now, they were the reason people shuttered their windows and closed down their shops at night. With tensions rising across the city, it was better to stay out of their way.

In the shadows between the stalls, a dark figure crouched out of sight.

It wasn’t the best idea.

Less than three feet away, there was a broad gutter cutting through the road ankle-deep with the waste of the day. Even with the breeze from the Bosphorus, it stank.

A donkey turd bobbed by.

Qasim El-Fahkri made a face, leaning further back into the shadows and away from the gutter.

It was going to be a relief to get back to the twenty-first century, a time with better hygiene and less danger.

Something brushed against his shoulder.

Only a few years earlier, Qasim would have screamed like a kid, fallen over, or added a sample of his own to the gutter. Thankfully, he’d been on enough missions to know how to control himself, even if his heart was slamming against his ribs and he’d snapped his mouth shut so hard he’d gashed his lip.

There were no shouts and, whatever it was, it didn’t have fingers or a grip on him or a knife at his throat.

A cat was standing on the cobbles, within arm’s reach, glowering at him as if he had mortally offended it for getting in its way. Standard cat, then. Relieved, he turned his attention to the soldiers. They were at the edge of the market now. He just had to stay out of sight a little…

The cat either didn’t speak panicked human or didn’t care and yowled again. The soldiers weren’t leaving. Their footfalls had turned, coming back, approaching.

Qasim glanced around wildly. There were only two exits from the marketplace, and one of them was definitely not available, on account of the swords and the men attached to them.

The cat wasn’t shutting up either.

Some part of his brain must have been operating because he grabbed the sodden creature and shoved it down the front of his robe. It squirmed but, mercifully, didn’t remember it had claws. Qasim wrapped his arms over his chest and held his breath.

The footsteps came closer, paused, then moved away again.

Too close. Far too close.

Cautiously, he slid closer to the edge of the market stall and peered around it. Between the other stalls, he could see the soldiers heading for the gate. All five of them were marching briskly, and he waited until they were out of sight, then slipped out from behind the stall and straightened up.

Maths. Bollocks! Always a weakness, but he’d never failed to count to six before.

Everyone thought Qasim was cool in a crisis, which was frankly hilarious. He was the proverbial swan: majestic on the surface, paddling like mad underneath.

Still, there was always a bit of him that seemed to know what it was doing, and it dinged the man hard across the head, hard enough to send him reeling and crashing into the nearest stall.

The cover on the stall gave way, taking one of the support beams with it. The silence shattered as wood and canvas and a full-grown, fully armed man crashed down on the cobbles.

Qasim turned and ran. Behind him, the fallen soldier was yelling. There was some very vulgar Turkish in there, nearly beyond Qasim’s vocabulary, but enough for him to feel offended on behalf of his mother and goats.

The streets were a labyrinth—one he’d memorised as much as possible in the weeks leading up to the mission. Just in case, Dieter and Gulshan had both insisted, and as Qasim ducked down a passage and skidded around a corner into a broader alleyway, he wanted to kiss them both.

There was a wail from inside his robe, and the cat wriggled against his chest, but there was no time to stop or release it. “Shh,” he panted as he vaulted over a staircase wall and dropped into the alley below. He ducked under the stairs to catch his breath.

From the street above, the shouts of the men chasing him rang out.

For once, he appreciated the curfew. The drama at the Hippodrome had people on edge. It wasn’t official, but with Janissaries raising arms, people preferred to take refuge indoors. A political storm was about to break. No one wanted to be caught in it. It also meant no one would flag the guards down and let them know where he was. Problem was he was out in the dark with roaming bands of Janissaries and had a rendezvous point at least a half a mile away.