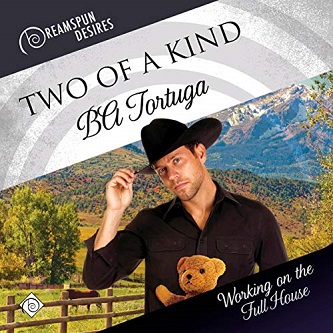 Title: Two of A Kind

Blurb: Working on a full house.

Once upon a time, Trey Williamson and Ap McIntosh had quite the whirlwind romance – but that was before family tragedy left them the guardians of five kids. Their lives have changed quite a bit over the last six years, but Ap is still on the rodeo circuit, doing what he does best in an at-tempt to feed all those extra mouths.

That leaves Trey back on the ranch, isolated and overworked as the kids’ sole caregiver. Some-thing has to give, and when Ap comes home, they’re reminded how hot they burned once upon a time. But is it a love that can withstand wrangling over time, money, and the future? They have to decide what kind of family they want to be…and whether what they share can stand the test of time.

Review: Two of A Kind is a wonderfully, sexy cowboy romance with a cast of crazy kids by BA Tortuga, for Dreamspun Desires. I love BA Tortuga’s stories, especially the cowboy ones. Because seriously, a story about a hot but flawed cowboy is just wonderful. Tortuga, for the most part, does justice to a story with at least one cute kid in addition to the cowboys. I love it!

I read the book of this when it came out and absolutely adored it from start to finish. So I was looking forward to killing some time during my commute listening to it all over again. On top of that, I was looking forward to the narration of John Solo, who did not disappoint. It feels like its been ages since I’ve heard Solo’s work. His voice lent added so much depth to the story, I loved it.

Trey Williamson and Ap MacIntosh met years ago when Trey’s sister and Ap’s brother got married and then proceeded to have five kids. They are both quite young – in their late twenties – and so six years ago when tragedy struck and Trey and Ap became the guardians to their nephews and nieces they were just at the start of their own adult lives. Trey had been saving to go to college and Ap had been on the road competing rodeos since he was approximately sixteen. While their siblings had been alive the two men had shared a couple of special moments but could never explore a serious relationship once they became the guardians to the kids. Trey stayed behind on the small ranch looking after the kids day in and day out, while Ap stayed on the rodeo circuit making money to raise the kids. In fact, Ap leaves very little money for himself, leaving it all for the kids.

However, after six years Trey is burning out. Six kids between the ages of six and sixteen takes a lot of energy and he has basically been a single parent the entire time. So Ap has to come back and be more than the uncle who rings up while on the circuit and go back to visit for special occasions. Ap learns some important home truths as he finds out just what Trey sacrificed to raise the kids and work his exhausting schedule. And so years after they had started to explore an intimate relationship, they are finally together under the same roof and no longer just passing ships in the night.

There was a lot of emotion and while I felt a bit of resentment at Ap for never trying to be more than the bread winner and the cool uncle who drops in every now and again, I really did like Ap and liked how his character matured.

Everyone who loves a good cowboy romance will be entertained by this one!