Hi guys! We have Michael War popping in today with his new release Under Five, we have a fantastic guest post from Michael, a great excerpt and a brilliant $10 Amazon GC or an ebook copy of Roommate Adventure by Michael War giveaway so check out the post and enter the giveaway!  ❤ ~Pixie~ 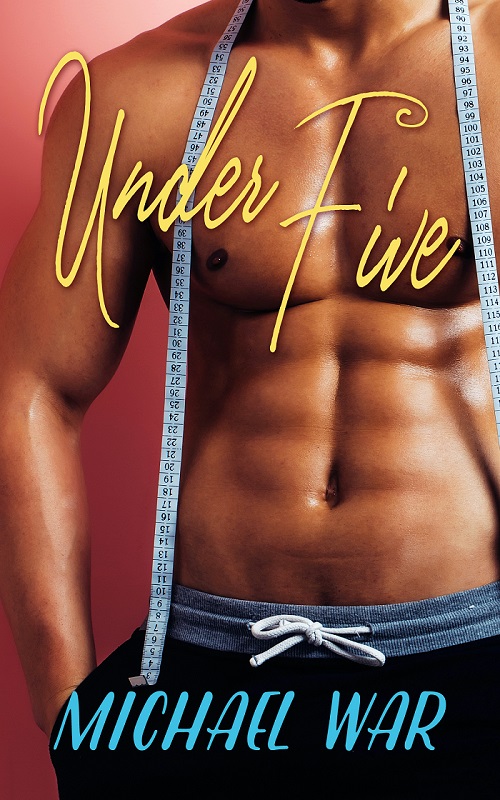 Mike is good looking, charming, and has no trouble attracting men—as long as his clothes stay on. But the moment they come off, something always seems to go terribly wrong. When his sister takes him to a faith healer to fix the problem, he is provided with a spell—and left with a lot of doubts.

But after meeting Kevin, Mike decides to give the spell a try…

I want to thank MM Good Book Reviews for giving me the wonderful opportunity to talk about my latest story, Under Five, with you today. I’m really excited about this one.

While writing this book, I wasn’t sure if I would ever be able to finish to it. I was adapting it from a screenplay that I had written years ago, and while that served as a terrific outline, for some reason, this one just wasn’t coming out like I had wanted. I stopped many times, and just couldn’t figure out why I was having such a hard time finishing it.

I’m going to be honest here. While I am fully embracing my Mexican heritage as an adult, that wasn’t always the case while I was growing up. My Spanish wasn’t always the best, and it seemed like that was an excuse for people to make me feel like I was trying to be something I wasn’t. Let’s just say, a lot like my MC in my earlier work Roommate Adventures, the word “coco” got thrown at me a lot. That caused me to regress from my heritage and essentially lose a part of myself that I wish I had nurtured. This must have really taken a hold on me, since I seem to revisit characters trying to connect with their roots over and over again. I guess you can say that now as an adult, I am making up for lost time.

I think one of the main concerns I had while writing Under Five was the fact that this one really delved into my ancestral culture. I tend to be a perfectionist when it comes to certain things, and I always worry if I am going to do a subject justice. My fear was that I would miss some key detail or just get an obvious element so wrong that it would insult anyone who was familiar with it. While I did do some research, I was also basing some of the story off of tales I heard growing up, as well as some personal experiences. I’ve never actually performed a spell, but I do know people who faithfully visited curanderas (faith healers) and believed in their magic.

The spell in the book is a simple one, but boy does it cause a lot of trouble. Yet it also provides the MC Mike some insight into himself. That is what I often felt was the desired effect of magic such as the one portrayed in the book. People often seek answers, and this was a mean to get those answers. I can honestly say that the magic in the book also provided me with a few answers of my own. It showed me that even though I am in my 40’s, it is never to late to learn about where you came from. Plus, that I shouldn’t be afraid to write about these things, since that is one very important way for me to connect with my heritage. Those are lessons that I will value for many years to come.

I hope you all enjoy the story as much as I enjoyed writing it. This was the first time anyone asked for the lights to be completely out. I mean, there are some guys who like the dark, but they always want some sort of light coming in. It could be a candle, night light, or just a crack from the closet, just something to keep things from being completely black. But not this time. Carlo wanted the lights completely off. I wasn’t sure whether to be offended, or to simply just go with the flow.

But it did kind of bother me, even while we were kissing and rubbing each other all over the place. I tried to forget about the fact that we messed around the last time with all the lights on, but it was still nagging me a bit.

“Everything okay, Mike?” Carlo asked. While I couldn’t see them, I knew his emerald green eyes were pointed directly at me. They were fake, but man, did they compliment him so much.

“Nah, I’m good, just come over here,” I cooed, pulling him up closer to me. We still had our clothes on, so it was easy to grab his shirt and bring him in closer. I wanted to feel his hot breath against my neck, followed by his gentle kisses. The two times we hooked up before, we only kissed, and both times we only had our shirts off. But this time around, I wanted more. I wanted him to take me, to ravage me. To fill me up and not stop until we were both on the verge of exploding.

I could tell that Carlo was a bit surprised, even though I still hadn’t completely adjusted to the dark, but he seemed into it and let me drag his mouth closer to mine. He took his hands and gently placed them on the back of my head, pulling a little on my hair but not enough to cause me pain.  “Don’t stop, keep going,” I moaned. Carlo intensified his kisses and started moving down towards my neck, then pulled back and little and began to pull my shirt off. I started on his before my shirt even hit the floor, and now for the first time tonight, we were both finally showing some skin towards each other.  After a bit of kissing and exploring, I forgot about the light situation. Thanks to the moon beaming through my curtains and right toward my bed I was able to make out where I wanted my hands to go. Carlo had the body type I loved; bearish, with broad shoulders and big, strong arms. But what got me was his chest. In the moonlight and without a shirt, Carlo was simply beautiful. Even though I wasn’t a bear myself, I could appreciate the slight hairy trail he had going from his chest down to his stomach. I could see that the trail went even further, and I wanted him to reveal more.

Carlo continued to kiss me down my body, but I stopped him right before he got to my stomach.  “Let me take off your pants,” I ordered. I was hoping he would be turned on by the dominance in voice and simply obey. “No, you first. I want to show you everything I have to offer you,” Carlo responded, his hands rubbing the top of my shorts, fingers slightly pushing under the elastic. He let it snap a few times before slightly licking his lips.  I arched up a bit to help him out, and he obliged by grabbing my shorts at both ends and pulled them off along with my underwear. He placed his hand on my now erect cock, then stopped for an awkward minute.

“Something wrong?” I asked.  “No, um, just thought of something,” he replied, giggling a bit before continuing. “Now get ready to have the best sex that you….”  He didn’t finish. How could he now that he was giggling like crazy? I wanted to jump out of the bed right then and there, but he still had my dick in his hand, and even though it was getting flaccid, I didn’t want to make any sudden moves and damage myself.  “Would you mind letting go? I would like to get dressed.” He did, even though he was still laughing like a lunatic. I picked up my clothes and put my underwear on, then went for the lamp by my bed. Carlo was sprawled out across my bed. While his laughing had stifled a bit, his red face showed that something had amused him to no end.

I slipped my shorts back on and began to gather up his things.  “Oh come on, don’t be that way. I’m sorry. We can still mess around. I just need a minute.” The moment he finished his sentence, Carlo began laughing again. He put his hand over his mouth so it wouldn’t be so loud, but it was no use.

“What the hell is so funny? I was good enough for you before. What changed now?” I stared him down hard; so hard that I was able to break his laughing fit up once and for all.

“I don’t want to offend you. You’re a nice guy. I was just taken by surprise. You know how it is with these things,” Carlo stated as he got up from the bed and walked over towards me.  “No, I don’t know. I don’t have a clue about what is going on.”

Carlo took my hand and looked me straight in the eyes with his emerald greens. For a second, I almost melted. But then the laughing started going on in my head again, and my fury came back full force.  Looking at Carlo’s face, I could tell he had something he wanted to say, but just couldn’t. He kept biting his lip, and you could tell he was thinking very carefully before he spoke again. The anticipation wasn’t helping my tolerance, so I knew that I had to speed things up a bit.

“Just spit it out.” Carlo looked at the floor one more time, then right back at me.  “It’s just….well….I…..I didn’t expect it to be so small.” I really don’t remember what happened after that, but I do recall that I was rushing him out in just his underwear, not giving him anytime to put his other clothes back on. He pleaded with me a bit, asking to stay and make it up to me. And I almost did — until he mentioned that his was just used to bigger. Michael War is a writer whose real life tends to be on the boring side, which is why his imagination seems to float towards gay romance. Aside from writing about beautiful gay men of all types (bears, jocks, twinks) getting it on, he also enjoys writing poetry and screenplays. War holds an MFA in Creative Writing and plans to write more romance themed books in the near future. Follow him on Twitter and Facebook  for updates on upcoming stories or with any questions or comments. Or, you can read his blog for some mindless ramblings.

Win a $10 Amazon Gift Card or an ebook copy of Roommate Adventure by Michael War!