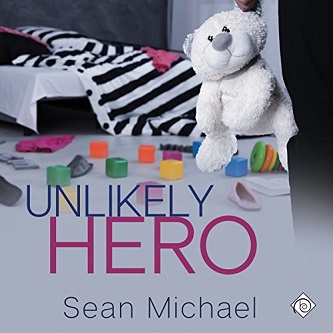 Blurb: When his three-year-old daughter is kidnapped, Eric Wilson doesn’t have many options, and time is running out. With nowhere else to turn, he reaches out to his ex, influential businessman Brock Vencenza, whose money and contacts might be able to save Josie.

Brock never got over Eric’s loss, and he’s more than willing to help when Eric needs him most. Together with law enforcement and private security, they embark on a twisting investigation to find the little girl – and who wants to hurt her and destroy both men in the process. Under the circumstances, confessing he still has feelings for Eric would be inappropriate, but Brock can’t deny what’s in his heart. He doesn’t know if their love can be rekindled or if he can even protect Eric and Josie. But one thing is certain: Brock’s determined to be the hero in reality that he is in Eric’s eyes.

Review: Unlikely Hero is a really well written story of second chances, the family you make with a rush of danger. Written by Sean Michael, I really looked forward to listening to this audio, mostly because I don’t think I’ve come across a book by Michael that I didn’t at least like. I also love how Michael has a knack for weaving wonderful child characters into stories as well, which is where many of his characters form their own families.

Jeff Gelder did the narration for the audio, which I thought was a perfect choice. I’ve heard Gelder perform a number of different books before, but I think he just really nailed this one. Specifically, I think his voice and tone was flawless for the main character, Eric. He also does a pretty good voice for Eric’s little girl Josie.

Eric and Brock are interesting characters, especially since we get into the story where these guys have a very well developed and described past. They had been together and in love when Eric broke up with Brock ten years earlier and they never lost their love for each other in the intervening years. There is no animosity between them, in fact it’s like that one friend you have where you don’t talk to them for years but you get back in touch and it’s like none of those years or months have passed, you just fall back into the old rhythm. However, in this case it’s more of a case they had Mr Right, they were simply in the right place at the wrong time. More than anything else, though, Eric had feared Brock drifting away because Brock was a rich businessman and Brock a high school teacher.

Time has been kind to them for the most part, Eric has adopted a little three year old called Josie (she is totally adorable) and he is mostly estranged from his family. For Brock while there had been a few men in his bed, he admits that he had hardly changed at all (probably a good plot device so that we can focus on the danger and allow the romance to just happen). I think if I have any real problem with this book, it’s that they were apart for so long before coming back together.

When Eric’s little girl is kidnapped, he cannot think of anyone he can trust more to help him than his ex, the rich and handsome Brock. Brock has never stopped loving Eric and when he finds out what has happened he will do anything to help. It’s not a smooth and clean ending to the ordeal though, and Brock becomes very protective of Eric and Josie. Brock had never wanted a family, another part of the reason why Eric broke up with him, but being in Eric and Josie’s life brings him the discovery that maybe life could really be a compromise of what he and Eric want most and they might just find their HEA.

While it’s not insta-love, there is a definite feel of things just falling into place between the men automatically. For that reason, despite their past, I do wonder if people that don’t like insta-love will have the same reaction to this relationship, especially with a ten year gap.

As for me, I absolutely loved the book. The dynamic and connection between Brock and Eric, as well as the kidnapping and psycho storyline was enough for me to forget some of the little things that should annoy me, as well as the fact that I figured out who was behind the kidnapping well before the end. The two men had fantastic chemistry and very definitely belong together!