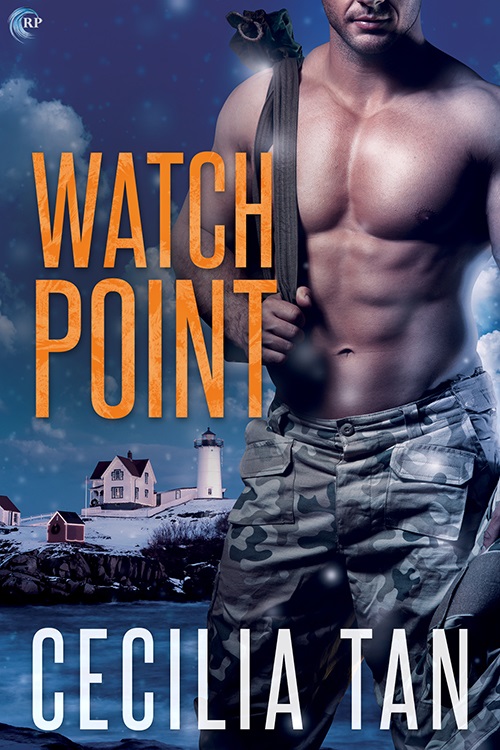 Hello! I’m Cecilia Tan, and right now I’m virtually touring my gay Navy SEAL romance, WATCH POINT. At each stop on the tour, leave comments to be entered to win a gay/queer romance prize pack from yours truly, including not only a copy of Watch Point, but a few of my other books (The Prince’s Boy, Magic University) and a Daron’s Guitar Chronicles swag pack with notebook and stickers.

I brew us both coffee in the coffee maker and give him breakfast: nuked English muffin sandwiches I stashed here in the fridge. Time to get out of here. Another day pretending I’m going ice fishing, but this time with a friend. That’s assuming anyone even sees or notices, which they probably won’t.

Chase is still naked except for the restraints while we eat breakfast sitting on the bed. He asks casually as he licks his fingers, “Hey, so, where are we now?”

“You got somewhere you need to be?” I ask, just as casually. Or faux-casually.

He shakes his head. “Nope. If I had somewhere to be, I’d have something better to do than sneaking out for raunchy hookups.”

“You worried about your car?” I wonder if there’s a loose end.

There isn’t. “I walked to a convenience store and took an Uber from there.” He shrugs but his eyes are challenging me. What now? they seem to be asking. “My father would kill me if he knew what I was doing.”

“The worst. Raging homophobe doesn’t begin to cover it. I’ve seen him fire guys for even suspecting they’re gay.”

Huh. I wonder who besides me. I keep my face neutral and don’t dare say anything.

Chase chuckles and sips his coffee from the paper cup. “The really rich thing is, I think he thinks he’s protecting me. Like if I never get a whiff of gay hormones, I can’t be tainted.”

“Twenty-two years too late,” he says, being truthful about his age. “Born this way.”

When I was twenty-two, I’d already been in a war zone. “Me too,” I say, but how I was born is nothing compared to the life that’s shaped me. I continue to pretend I know nothing about him. “So you grew up sheltered.”

“Yeah, you know, homeschooled, the whole nine yards. I convinced him to let me go to cooking school. He had a guy chauffeur me to class and wait there to take me back the second I was done.”

“Yeah. So’s getting blown in the walk-in fridge.”

He nods, giving me that coy, seductive look again. “’ts why I need a big, bad top to keep me in line.”

The truth is I’m not that big. I’m more of a Bruce Lee than an Arnold Schwarzenegger—SEAL training puts lean muscle on, not bulk. But maybe he’s talking about my dick. I wonder when we’ll hear from his father next. “We could keep this thing going for a while longer,” I say. “If you want.”

He nods. “Promise me you’ll torture your captive, too?” He gives me the puppy-dog eyes then.

“Torture isn’t really my style,” I say. “Unless you count orgasm denial as torture.”

“Everything counts,” he says. “Maybe a little light interrogation?”

“Like you’ll be able to answer any questions with my cock in your mouth.” I stand up and I notice his cock is doing the same. This kid is all hormones, I swear. I finish my coffee, crush the cup, and toss it into the garbage can. “You want to do this for real, give me the unlock code for your phone.” 20% of all proceeds from this title will be donated to the Russian LGBT Network.

Each year, Riptide Publishing releases a holiday collection in support of an LGBTQ charity. Twenty percent of the proceeds from this year’s collection will be donated to the Russian LGBT Network.

The Russian LGBT network was founded in April 2006. It is an interregional, non-governmental human rights organization that promotes equal rights and respect for human dignity, regardless of sexual orientation and gender identity. They unite and develop regional initiatives, advocacy groups (at both national and international levels), and provide social and legal services.

To learn more about this charity or to donate directly, please visit their website: https://lgbtnet.org/en.

This collection would not be possible without the talent and generosity of its authors, who have brought us the following holiday stories:

Pre-ordering this collection will allow you to download each story two days prior to its official release date, as well as save 20% off the list price of the individual books.

Her short stories have appeared in Ms. Magazine, Nerve, Best American Erotica, Asimov’s Science Fiction, and tons of other places. She was inducted into the Saints & Sinners Hall of Fame for GLBT writers in 2010, was a recipient of the Lifetime Achievement Award from the National Leather Association in 2004, and won the inaugural Rose & Bay Awards for Best Fiction in 2010 for her crowdfunded web fiction serial Daron’s Guitar Chronicles.

She is the editor of the Baseball Research Journal and is publications director for the Society for American Baseball Research. She is also a part-time taekwondo instructor and is a certified therapist in an Asian bodywork style known as Okazaki restorative therapy. (That’s a fancy way of saying she can break you and then fix you up again.)

She lives in the Boston area with her lifelong partner Corwin and three cats. Find out more at www.ceciliatan.com. To celebrate the release of Watch Point, one lucky winner will receive a swag bag including a copy of Watch Point, The Prince’s Boy, Daron’s Guitar Chronicles Vol 1, a DGC T-shirt, notebook, and stickers!