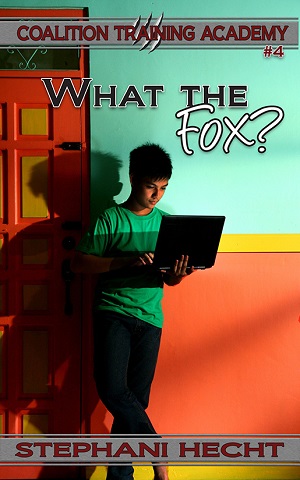 Title: What the Fox?

Blurb: Fox shifter, Kacey, always has the knack for finding trouble. But, he gets more than he bargained for when he hacks in the feline Coalition’s computers and gets caught. He’s used to his cruel Alpha and is expecting the worst to happen him. Instead, Mitchell invites him to join the Academy. Kacey is excited about the new turn his life has taken, but scared, too. He thinks he’s going to be the only Fox among a sea of felines.

As soon as Jax meets Kacey, he likes him. Jax knows how it is to be alone and scared. Jax and his friends take Kacey under their wing and show him what true friendship is about. But, Kacey is in more danger than Jax ever believed. Will Jax be able to save his new friend? Or will Kacey’s past ruin his bright future?

Review: This series is branched off from the Lost Shifters, Wayne County Wolves, Assassin’s Loyalty and Shane’s Chronicles. So I would suggest reading those books first.

Kacey has big problems, one of them is going against Carson. He thought it would be cool to screw around with the coalition, but in the end they were the ones to catch him. With his new friends, he is about to find out more about his old pack.

As usual Stephani Hecht has given us a great read, but there are some problems with the story. Mainly it is misspelled words that should have been caught early on. Other than that it is a fun story that caught my attention from the start. I get a kick out of the kids and can’t wait to get my hands on the next book.