Hi guys! We have Pat Henshaw stopping by today with her new re-release What’s In A Name?, we have a brilliant guest post from Pat, a great excerpt and a fantastic $10 Amazon GC giveaway so check out the post and enter the giveaway! ❤️ ~Pixie~ 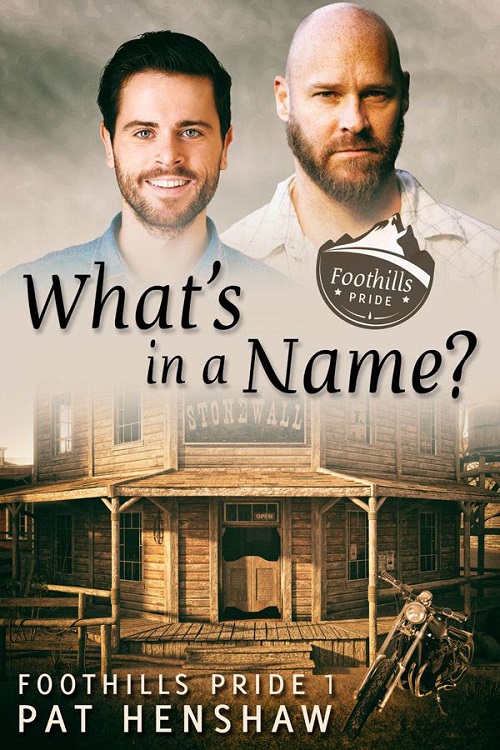 What’s In A Name?

On his 30th birthday, barista Jimmy Patterson decides to get rip-roaring drunk after his roommate-boyfriend abandons him at a bar in the tiny California foothills town of Stone Acres where they have relocated from San Francisco. Jimmy is immediately rescued by the burly owner of Stonewall Saloon, who has had his eye on Jimmy since the first time he came in months before.

Jimmy’s fine with being saved but wants to know the bartender’s real name since the guy has worn name tags with an assortment of names every time Jimmy has spoken to him. After Jimmy nicknames him Guy, the bartender decides to turn guessing his first name into a game, giving Jimmy a guess a day for a week and promising to wine and dine him during that time. If Jimmy’s guess is wrong, he owes Guy a zing-zow, knock-your-socks-off kiss. Jimmy agrees since this sounds like a slam-dunk, win-win deal.

While he searches for cringe-worthy given names, Jimmy is distracted by the destruction of his shopping mall coffee shop. He is also beset by the town council that doesn’t want him to buy an historic bank building in Old Town Stone Acres to set up another coffee shop. The celestial high of being romanced by Guy and the abyss of business worries don’t seem like the road to happily ever after. However, Jimmy and Guy might be in for a big surprise. Sometimes research is fun and exciting. Other times it’s weird and unsettling. But most times it falls in the middle somewhere. What is a typical Serbian surname? How does one learn to ride a unicycle? Where do phosphorescent tides appear? Stuff like that.

Lately, I’ve been watching YouTube videos about what a super deluxe head shaving at shops from a neighborhood barber to a super salon entails. The protagonist and narrator Oscar in the book I’m currently writing (Ox in Love) is for all intents and purposes bald. Except for the fuzz and individual hairs that sprout and populate his head.

Usually Oscar goes over his head quickly with his shaver and gets rid of anything that sticks up funny. But in the chapter I’m working on, Oscar is going out on a special date with someone he’d like to get to know better. Greg, the guy who asks Oscar out, tells him to wear a suit and tie for their date. So Oscar thinks he should get his barber buddies to give him the top-notch treatment.

But I’m not bald. What to do? The answer is to do what authors who are writing a chapter out of their knowledge zone do: research.

In this case, I’m watching a number of barbers from around the world oil, massage, and shave bald heads. What I love about all the videos is how stoic and manly the customers try to look as a hot towel is wrapped around their glistening heads.

If it were me in the chair, I’d be sighing and relaxing, probably looking like I was on the verge of an orgasm. Not these guys. No, they look stern, maybe a little nervous, but not close to seventh heaven.

So I watch as they try not to move or show any emotion at all. Even when the barber is finished and asks how they like what he (and it’s always a he) has done, the most I’ve seen so far is a tiny nod and a grunt. No “it looks great, man.” No “Nice!” Nope, it’s just grunt and go.

Oscar’s not that kind of guy, though.

What does he do? Well, since I’d like you to read that book when it’s published, I’m going to have to leave you hanging until I finish writing.

Join Pat and members of the Queer Sacramento Authors Collective (QSac) as they read excerpts from their books on Friday, August 7, at 7 p.m. See a link on my Facebook page to the event.

Also, look for the rest of the Foothills Pride series releasing from JMS books throughout this fall. Is there anything worse than waking up with a really bad hangover? The answer, I found out that morning, was a solid yes. My particular hell was waking up in a strange bed with someone lying next to me, who’s snoring away so loud I was surprised the neighbors weren’t complaining. What made it all worse was I had to pee really, really bad, and I didn’t have a clue where the bathroom was.

I lay on my back taking stock. I was naked, covered with a beige sheet and navy blue comforter in a huge bed, my head taking up most of the California king space.

Where the heck was I? I had no clue. I really didn’t care because I was hurting so badly it’d probably be better if whoever lived here would just shoot me and put me out of my misery.

Still, I had to pee, so I slowly swam to the edge of the bed, trying not to move any body parts. Which was a complete failure. I ached all over. Had someone beaten me up?

As I reached the side of the bed and peered over the edge at the floor a few stories below, I groaned. Where was the ladder to climb down to the carpeting? I clutched the edge of the bed with one hand and rolled to my side.

“Hey, where you going, Jimmy?”

I hadn’t noticed the snoring had stopped until the voice boomed in my ear.

Carefully, I turned my head.

The Stonewall Saloon bartender with the nametag of Alex last night was peering at me over his chest of hair. His eyes were squinted. A slender beam of light from a gap in the curtains was aimed at his face.

“Right.” He groaned and caused a tidal wave on the mattress even though it wasn’t a water bed.

My body reacted with the seismic quake and my stomach protested. I swallowed back the rising pain even though I knew my gut had nothing left in it to come up.

I felt large hands under my arms.

His voice clanged from one of my ears to the other.

He turned me, and we marched to a doorway and into the bathroom. Carefully, he lowered my nude body down onto the toilet.

“No spilling.” He turned away and walked into the hallway.

I pushed my limp dick between my legs and did my thing, not spilling a drop on the bathroom floor or the toilet seat. Then I rested my arm on the sink counter next to the toilet and put my head on my arm.

“Nope, no snoozing here.” His voice boomed. “C’mon. It’s way too early for this shit.”

Again arms lifted me. After I balanced myself, one hand left. The toilet roiled. The hand returned.

“We’d usually wash our hands,” the voice murmured through me, “but I think we’ll skip it this time.”

Back in bed, covered, dry mouthed, I decided it was again nap time.

THE NEXT time I woke, I was awake. Awake awake. Oh my God, where in the hell am I awake. Shit, I’m in big trouble awake. Where are my clothes awake.

I took inventory. No pain in the ass. That was a relief. No smell of semen. Check, and another sigh. No aches and pains that weren’t directly related to way, way too many shots and beers, check. No clothes. No clothes?

I was okay, pretty much, other than naked, hungover, and in a stranger’s house.

Damn it, I was thirty years old, naked in a stranger’s bed, with only a hazy recollection of what happened after my now former boyfriend Alex stranded me at the Stone Acres’ historic saloon.

I had a hazy memory of the bartender helping me to the bar bathroom the night before and this morning. So was I at his house? If so, how’d I get here?

“Um,” I tried to say, but my mouth was glued shut.

Okay, I was alone in a strange bed as my memory filtered back online. I had been an ass, and the bartender with the faux name of Alex had taken care of me anyway. I owed him my firstborn child, should such a thing happen to me now in my boyfriendless state. I owed Alex the bartender everything, including my pride and gratitude.

What I really needed to do was apologize for causing him so much trouble.

Slowly I sat up and then stood. My knees protested, so I sat back down and then tried again. This time my knees cooperated. Pat Henshaw, born and raised in Nebraska, has lived on the U. S.’s three coasts, in Texas, Virginia, and now California. Before she retired, she held a number of jobs, including theatrical costumer, newspaper features reporter and movie reviewer, librarian, junior college English instructor, and publicist. She also loves to travel and has visited Canada, Mexico, Europe, Egypt, and Central America as well as almost all fifty U. S. states.

Now retired, she enjoys reading and writing as well as visiting her older daughter, son-in-law, and grandchildren on the East Coast and playing havoc with her younger daughter’s life in NorCal.

She thanks you for reading her books and wants you to remember that Every day is a good day for romance.

Where can you find the author?: