Hiya peeps! We have Jaime Samms popping in today with her new release Wheels and Heels, we have a great excerpt and a fantastic giveaway so check out the post and leave a comment to enter the giveaway! ❤ ~Pixie~ 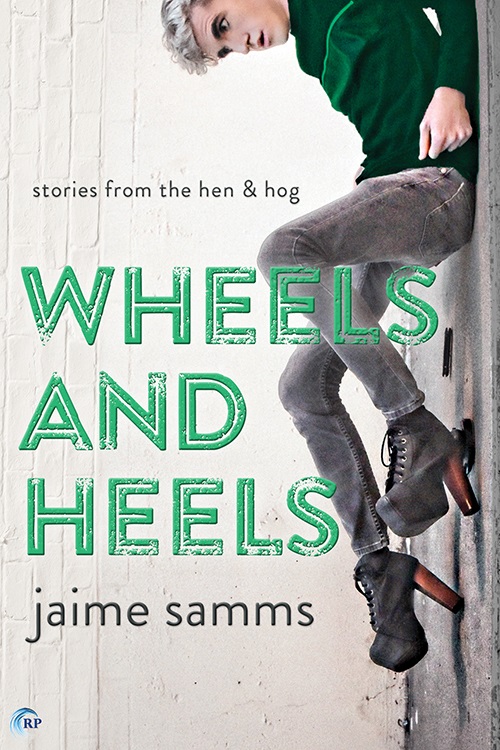 As a teenager, Ira Bedford fled a troubled home life and people who didn’t understand his penchant for feminine things. In the city, he fell in with Cedric, who found him work as an underage stripper. It took him years to escape Cedric’s influence and try to build a life of his own.

Now, he just wants to be left alone to create his art. But Cedric’s on-going harassment means Ira had to drop out of art school, is squatting in a friend’s apartment, and is still relying on his allure as a sexy, skirt-wearing exotic dancer to pay his bills.

Then he meets Jed. Part-time bartender and the apartment building’s superintendent, Jed is just the right mix of strong, kind, and protective to pull Ira out of hiding. He also welcomes Ira into his chosen family at the Hen and Hog Pub. But Ira yearns for more. Still, he doesn’t dare to hope that Jed will want him and his questionable past, his skirts and high heels, his hang-ups, and the profession he seems unable to escape. But Jed will do anything to prove him wrong.

Hours later and nearing home, Jed swept a glance over the abandoned construction site ahead on his right, then the row of boarded-up storefronts on his left. Too many streetlights were out along this stretch. Nervous, he gunned his motorcycle engine as he waited for the light to turn green.

He’d passed a gang of drunk assholes a block earlier, and their slurred derogatives had carried over his bike’s rumble enough he hadn’t needed to hear the exact words to understand the gist. It wouldn’t be the first time his shaggy beard and baggy jeans earned him taunts of “hobo” or “bum.” Never mind he was actually gainfully employed twice over. All anyone saw when they looked at him was his beard and that he didn’t trim it every day.

Ahead, a streetlight flickered, blinked, and went out, plunging the already foggy night into deeper gloom. Didn’t anyone in this neighbourhood report burnt lights? It blinked back on again, then flickered, creating a variegated haze.

The group of bumping, jeering men drew closer before his light finally changed. He urged the bike forward, relieved to be leaving them behind. His motorcycle looked badass, but it didn’t offer him any protection from a bunch of guys with impaired judgement and a collective mean streak.

Another few blocks and he’d be in a better-lit, less creepy neighbourhood, and then around the end of the construction, the park beyond, and close to home. Hopefully, the rest of the lights would stay green and he could sail through.

Then the streetlight ahead flickered back on and his heart sank. A waif of a girl in skinny jeans and a pair of strappy heels minced through the next intersection toward a break in the chain-link fence of the construction site. Her hips swayed sweetly as she hurried along, the pale jeans and loose sweater she was wearing highlighting her dainty frame.

Soon it wouldn’t be Jed the drunks were harassing.

Jed revved his engine as he approached the girl, giving her warning as he slowed and called out, “Hey there!”

She picked up her pace, clearly frightened, not even glancing his way.

Jed slowed further and pulled alongside her, but not close enough to reach her. “Look, lady.” He didn’t like calling her that, but he had to get her attention somehow.

“Leave me alone!” She picked up her pace, and Jed worried her heels might snap under the workout she was putting them through.

“Listen!” Jed shouted over his bike engine as he pulled around to block the path through the fence. “Just— Oh!”

The guy curled his lip. “Oh,” he mocked, flipping the hank of hair that hung over his forehead to one side. “Move. I need to get past.”

“Wrong. You thought wrong. Most people do.”

“Right. I mean— Shit.” Jed glanced down the sidewalk to track the group of drunks. “I just meant to say.” He sighed. “Look, it doesn’t matter, okay? One way or the other, you’re not planning on going through there after dark, are you?”

“I can take care of myself.”

Jed glanced past him again. The men had slowed, but not given up the prospect of easy prey.

“I wouldn’t take a chance with that many.” He pointed, and the guy followed his finger.

“I don’t have a lot of choice, do I? It’s between where I was—” he jerked a thumb over his shoulder “—and where I’m going.” He pointed in the general direction Jed was headed. Cutting through the construction site would be faster. But in there, if he needed help, no one would know.

“It might be the shortest route, but it’s not the safest.”

“Still. You should go around to the park at the end to the street. Trust me on this.” Once more, he glanced over at the group of guys and frowned. They’d stopped, lingering on the corner to watch Jed and his new companion. Did they know this was a guy? Jed bet not. Not with the heels and the fact they hadn’t seen his face or talked to him. And when they found out, their wrath would only bring that much more shit down on the guy’s head.

No way was Jed leaving him alone now.

“Says the bear who’s obviously never walked in heels in his life.”

Jed glanced down at the guy’s footwear. “Well. No, actually. That’s true. Why are you?”

“Why shouldn’t I?” He stuck out his well-sculpted chin and squared his shoulders.

“Because they aren’t practical?” Jed offered. “And I’m guessing you probably can’t run in them, either?”

“Get on the bike, please,” Jed said, being as calm as he could manage. The men down the street had apparently decided that whether he stayed or left didn’t matter, as now they ambled closer.

“Are you nuts?” The guy tried to go around Jed, but Jed revved his engine and let the bike roll forward enough to intercept him.

Behind the guy, a shout went up, and he turned.

“Shit.” Jed’s engine was too loud and he didn’t hear the word, but he saw the guy’s lips move and his tongue dart out to coat them. That brought the lip gloss to Jed’s attention and he blinked. Another shout from down the street banished the distraction.

“Hey, bitch-boy!” someone shouted, and the guy with Jed jumped.

“Dude, you know that’s a fag, right?” One of the assholes called, apparently addressing Jed. So they did know he was a guy. And they didn’t like it.

The young man’s teeth dug prettily into his glossed bottom lip. He looked back to Jed.

“Please,” Jed said again, hearing the stress sneak out from under the tenuous calm. “I really don’t want to get the shit kicked out of me today.”

Jed pulled in a fortifying breath. “Yes, it is. Because if I ignore it, that’s on me. Get on.”

The man’s lips tightened and his high cheekbones darkened. In the dim light, with his long lashes, full lips, and trim form, Jed thought he looked more feminine than not. The cowl neck of his fuzzy sweater and his heels and makeup blurred a line Jed would have to figure out how to redraw in his own mind. Later. Right now, they needed to make tracks.

“For Pete’s sake. I wouldn’t walk alone here at night, dude. And I won’t be able to protect either of us from that many assholes. Can we go and discuss who’s tougher someplace less creepy?”

Plucked brows drew down over storm-grey eyes. He had opened his mouth, when another, angrier shout reached them. He glanced over his shoulder, and this time, Jed heard the gasp. The guys were practically on top of them.

“Come on!” Jed revved the engine, bringing the guy’s attention back. They were seriously running out of time here.

One of the gang reached them, grabbed for the guy, and caught the strap of his messenger bag. The slender man was nearly pulled off his heels, and Jed struck out, catching the assailant with a hard jab to his chin. The strap snapped, the guy grabbed his bag under one arm, clutched his books with the other, and flung a leg over the seat behind Jed. He shoved the bag firmly behind Jed’s butt, then wrapped that arm around Jed’s chest. Once seated, he rocked his hips like he could make the bike move by shimmying his little behind in the seat.

Jed groaned and twisted the clutch, jerking the machine into motion, praying the guy was holding on tight enough he didn’t go flying off the back. He didn’t, but his grip around Jed was breath-stoppingly tight. He leaned forward and melded himself against Jed’s back, face between Jed’s shoulder blades. The hard corners of his books dug into the muscle along Jed’s spine. It was a nice distraction from the rest of the guy’s compact body plastered against his.

A lot of swearing followed them down the street. The arm around him tightened, the hand splaying out under the thick fleece of his hoodie. Jed’s heart pounded. He put that down to the near escape and didn’t think about the heat of the palm burning through his T-shirt.

These days, you can find plenty of free reading on her website. She also writes for Various Publishers.

Spare time, when it can be found rolled into a ball at the back of the dryer or cavorting with the dust bunnies in the corners, is spent crocheting, drawing, gardening (weather permitting, of course, since she is Canadian!), or watching movies. She has a day job, as well, which she loves, and two kids, but thankfully, also a wonderful husband who shoulders more than his fair share of household and child-care responsibilities. To celebrate the release of Wheels and Heels, one lucky winner will receive a $10 Riptide credit!

(Entries close at midnight, Eastern time, on March 17, 2018. Contest is NOT restricted to U.S. entries.)