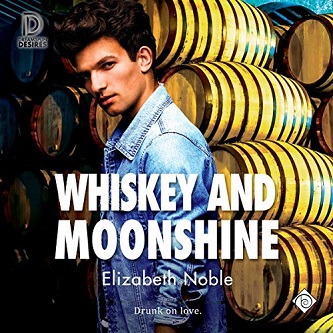 Blurb: Like a well-aged whiskey, master distiller and old-money entrepreneur Malone Kensington is elegant and refined. Unfortunately he’s also a perfectionist who is more dedicated to the suc-cess of his generations-old company than his own love life.

What Colton Hale lacks in sophistication, he more than makes up for with the charisma that’s al-lowed him to survive on the street from a young age and charm his way into the lucrative – if overwhelming – public position at the Kensington Distillery. When Mal takes Colt under his wing, hoping to polish off his rough edges, opposites attract and a passionate romance blossoms de-spite the differences in age and background. But can it survive a Kensington Board of Directors who believe Colt is nothing but a gold digger and a kidnapper determined to profit from the love of Mal’s life – dead or alive?

Review: Whiskey and Moonshine is standalone romance set in Tennessee, obviously amongst whiskey and moonshine stills by Elizabeth Noble. This was published as part of Dreamspun Desires, which is always a plus for me. The fact that John Solo is the narrator is another plus for me.

I really haven’t heard too many books narrated by John Solo lately. However, it is always awesome to hear the man perform. He is one of those narrators that has a voice that suits so many different genres of romances and different types of characters. I love how Solo manages to convey the emotions of both Mal and Colt, the two MCs. I always enjoy his performances and this is no different. It enhanced my experience and my enjoyment of the book. Overall, an excellent narration that I cannot fault.

This is a completely charming and sweet romance. The story focuses on the Kensington Distillery which produces whiskey and moonshine, and the very sexy man who is dedicated to his family’s company and making it more accessible for the younger generations that is the focus of this story. To do this it is decided that they need to employ a young, passionate person to be the PR face of the company.

The story opens with Colton Hale, he’s twenty-four and has been living on the streets of Toledo since he was fifteen. The most recent run in with violent thugs has Colton ready to make a new start, so he gets the first bus that will get him out and his new adventure starts. The bus ride brings him to the Kensington family’s whiskey distillery. They’re a rich and hugely successful distillery in Tennessee. Colt manages to get himself a job and just six weeks later shows his ingenuity and passion for his work that leads him to another job for the company.

I’ve read this story before and while I remember liking it, I forgot about the awesomeness that was multiple references to the Joss Whedon TV showed Firefly. Because I’m a nerd and a browncoat and the fact that it features so prominently in a book I enjoyed was shiny. I’m a total sucker for Firefly. Because of that I see the name Mal and I think Captain Malcolm Reynolds – though I can never say I was disappointed to realise that this Mal is short for Malone. But it is sweet and smart Colt, who hasn’t had the best 9 or so years of his life getting into Firefly into the book that got to me. I really enjoyed the imagery conjured when Colt mentions the last line in the theme song, relating it to the backdrop of the rambling Kensington distillery/estate. But the best part, when everything seems to be falling apart Colt uses a Firefly reference to get Mal to help him.

This was a really enjoyable story. The characters were relatable and felt accessible to the reader, or at least to me. Again, the Firefly fan in me was totally appeased. While this isn’t actually set in a boardroom this is still at heart a story about a powerful CEO finding love in an unexpected place. So, I suppose if you like any romance set around vineyards and in boardrooms then this is one to enjoy. There is also an interesting celebrity element, where Colt navigates the world of social media and gains fame as the face of the Kensington brand. Others may also enjoy Colt’s storyline which is very much a rags to riches tale.