Hi guys! We have Andy V. Roamer stopping by today with the tour for his new release Why Can’t Freshman Summer Be Like Pizza?, we have a great excerpt and a fantastic $25 Amazon GC so check out the post and enter the giveaway! ❤️ ~Pixie~ 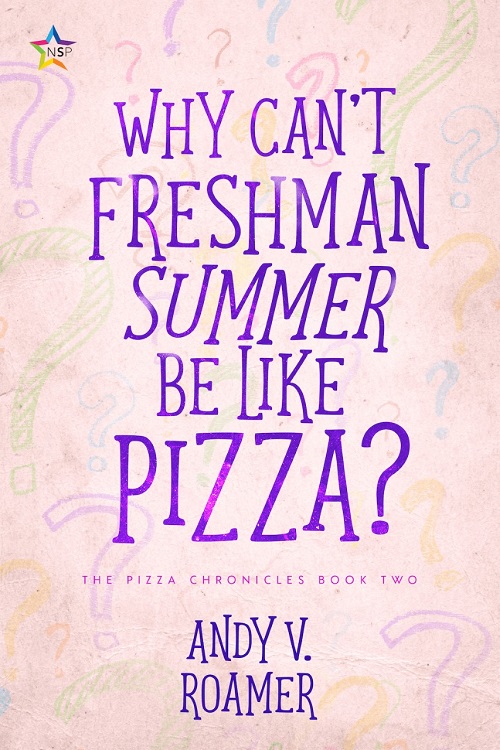 (The Pizza Chronicles 02)
by

RV, having successfully completed his freshman year at the demanding Boston Latin School, is hoping for a great summer. He’s now fifteen years old and looking forward to sharing many languid summer days with his friend Bobby, who’s told him he has gay feelings too. But life and family and duties for a son of immigrant parents makes it difficult to steal time away with Bobby.

Bobby, too, has pressures. He spends part of the summer away at football camp, and his father pushes him to work a summer job at a friend’s accounting firm. Bobby takes the job grudgingly, wanting to spend any extra time practicing the necessary skills to make Latin’s varsity football team.

On top of everything, RV’s best friend Carole goes away for the summer, jumping at an opportunity to spend it with her father in Paris. Luckily, there is always Mr. Aniso, RV’s Latin teacher, to talk to whenever RV is lonely. He’s also there for RV when he inadvertently spills one of Bobby’s secrets, and Bobby is so angry RV is afraid he is ready to cut off the friendship.

After dinner tonight Dad asked me to help him prepare for the test. Yay! He’s finally stopped procrastinating. When I walked into his little study he was flipping through the test-prep booklet. But he didn’t look like he was studying. Instead he was turning the pages haphazardly and frowning. No, scowling is more like it. That’s more powerful than frowning, right? Kind of like frowning to the umpteenth power.

When he saw me he put the book down and started complaining again. About a lot of things. He told me that the immigration process was all a money-making racket. That it showed the country didn’t really want immigrants. That trying to become a citizen the honest way was foolish because there were easier, dishonest ways to do it. That he’d never learn all the questions no matter how hard he tried.

I just stood there not knowing what to say. Dad just can’t help himself, can he? Why does he get into his complaining mode so easily? We get so sick of it. And I knew what he’d say next—that he might just pack his bags and go back to the Old Country.

Dad suddenly stopped talking as if he noticed me for the first time. He took a deep breath, asked me to sit down, and handed me the prep booklet. Good, at least he’s going to try, I said to myself.

He told me to ask him some questions. I found the pages with test questions and we started. I tried to ask Dad easy questions first, to give him a boost. Questions like “Who’s the current President?” and “What’s the ocean on the western side of the United States?”

Dad got those questions right. Progress! But he’s got a long way to go because when we got to the harder questions, he either shook his head or gave the wrong answer. I can see I’ll have my work cut out for me for the rest of the summer. Another little chunk of summer gone. It feels weird, like I’m the parent and Dad is the child. But I do want both Mom and Dad to become citizens, so Dad will stop talking about going back to the Old Country.

Dad was quiet again after he couldn’t answer the harder questions. He was staring off into space, not looking angry anymore. Instead he looked lost. I didn’t know what to do. I wanted to leave and I didn’t. Here was this big guy I’m usually so afraid of looking like a little kid. A lost little kid.

“Ar nori sustoti?” I asked. “Do you want to stop?” I told him we could continue another time.

He looked at me. “Nežinau.” “I don’t know.” He kept staring at me, but he wasn’t really focusing on me. It was as if he was looking through me, focusing on something far way. I asked him again if he wanted to stop.

He stopped and asked me what I had just said. I told him I didn’t say anything. I was just waiting for him to continue. He nodded and told me to ask him some more questions. But I could tell he wasn’t into it, and he kept getting most of the answers wrong.

I don’t know how long we both stayed there going over that dumb booklet. Dad’s thoughts were somewhere far away and we didn’t make much progress.

I finally mumbled something like, “Okay, I’ve got to do things for Mom. We can continue this another time.”

He nodded, still staring out into space. I slunk out of room, glad to leave.

But I was still thinking about Dad. Seeing him so sad got me really upset. I had never seen him like that. I felt bad for him. And for me too. Dad and I would have to work extra hard to pass that test. I’m determined to work as hard as we need to. There is no way I’m going let him take us back to Old Country. I’m still struggling to fit in here in my own country, which is hard enough. Andy V. Roamer grew up in the Boston area and moved to New York City after college. He worked in book publishing for many years, starting out in the children’s and YA books division and then wearing many other hats. This is his first novel about RV, the teenage son of immigrants from Lithuania in Eastern Europe, as RV tries to negotiate his demanding high school, his budding sexuality, and new relationships. He has written an adult novel, Confessions of a Gay Curmudgeon, under the pen name Andy V. Ambrose. To relax, Andy loves to ride his bike, read, watch foreign and independent movies, and travel.