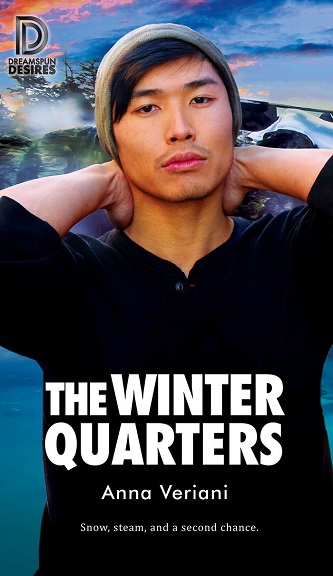 Reluctant socialite Kai has thirty-five days before his family starts shooting the next season of their reality TV show, revealing a life he’d rather keep private—and one that feels increasingly scripted. Desperately needing a break, Kai escapes to his childhood best friend Hiro Asada’s inn in rural Japan. He finds peace in the thousand-year-old hot springs, but his yearning for Hiro resurfaces at the worst time: Hiro is about to inherit the inn, and his parents expect him to marry within the year.

Hiro’s traditional family loves him for who he is, but they can’t imagine two men running the inn. Meanwhile, Kai has a TV contract his lawyer insists can’t be broken. Hiro and Kai need to think outside the box—and solve their problems before Christmas Day, when Kai’s show shoots its annual holiday special.

Review: The Winter Quarters is a standalone Holiday novel by Anna Veriani for Dreamspun Desires. Veriani is a new author for me, however, reading the blurb I saw the sweetness that I’ve come to expect from Dreamspun Desires so I was keen to give this a go.

Kai is a reluctant socialite to say the least. His family have a reality TV show that is somewhat comparable to Keeping Up With the Kardashians where his mother is the self-proclaimed matriarch of the family. And he really doesn’t like the attention or the whole farce of the thing. He only has little over a month before the show starts shooting again, so Kai decides to escape to the one place that had always made him happy as a child, the picturesque inn that is owned and run by his best friend Hiro in rural Japan. Spending time with Hiro leads to revealing a number of untold revelations and leads Kai to finally take the plunge to get out of his hated reality TV show contract.

Both Kai and Hiro are sweet characters, and while not overly developed I found it so easy to connect to their emotions. The romance was really sweet and satisfying.