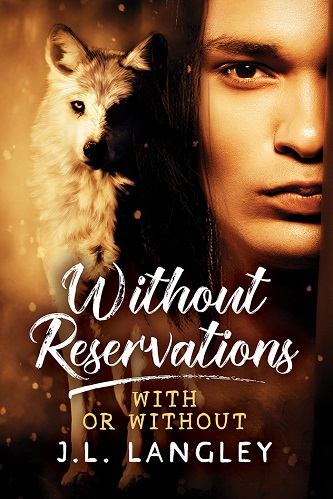 Series: With or Without 01

Blurb: Sometimes love catches you by the tail.

Native American veterinarian—and werewolf—Chayton Wilson dreams of a fair-haired mate. However, he’s shocked to find his mate is a man. He’s not quite sure what to do with a male mate, but he’s more than willing to find out.

Keaton Reynolds wakes up in wolf form and finds himself with a mate. He’s instantly attracted, but not thrilled to find out the man is supposedly straight. A past relationship where his partner denied being gay left a bad taste in his mouth. Keaton wants to make a break for it and pretend he never set eyes on Chay—but Chay is not ready to let him go.

Together they work to battle prejudice and solidify their shaky relationship. Chay must deal with not only his mother’s preconceptions about gay men but also her hatred of white people. When a power struggle in Keaton’s pack threatens Keaton’s life, the two men must quickly learn whether they can depend on each other.

Review: Without Reservations is the first book in JL Langley’s With or Without series.

I’m not unfamiliar with Langely’s work, but at the same time I’m not 100% certain on my opinions on their writing style and don’t remember how much I’ve enjoyed their books in the past. So I’ve come to this with an open mind, just looking forward to what looks to be a pretty decent shapeshifter romance, which I love.

That being said, it’s also not surprising that I didn’t even realise that this was a second edition until it came to writing this review. Previously published back in 2006 by Samhain Publishing, I can tell you right now, this didn’t make my radar back then, which would have been a couple years before I got into MM romances in the first place. And wow, I just checked out the series page on Good Reads – as it seems that Langley is going to re-release the whole series, I’m really looking forward to delving further in this world.

The book is the romance of Chayton Wilson and Keaton Reynolds, they are both werewolves but come from different packs.

Chayton is a veterinarian, who also happens to be Native American. He has dreamed of having his mate since he was a child, knowing that his mate would have golden hair and beautiful eyes. When Keaton and Chay first meet, Chay is shocked to discover that his mate is a man – he had always assumed that he would have a female mate. However, his dream of meeting his mate is enough for Chay to embrace the thought of having a male mate and more than willing to make a go at the relationship.

Keaton, though, has be burned in the past by a boyfriend who refused to acknowledge his homosexuality, and is therefore wary of his mate. It’s a disappointment after the excitement of realising that he had found his mate. Yet, Keaton gives Chay a chance. But this is the least of their obstacles. With Keaton being a white – as well as male – they face homophobia and Keaton is particularly disliked by Chay’s mother for also being White.

This is a great romance and while there is drama, it is more forces external to the two men that are throwing the obstacles in their direction. I found both men immensely likable and found that their situations were relatable to some extent, which made fall in love with both characters. This isn’t a super tense book by any stretch of the imagination, so this will appeal to those that like a light-hearted meeting and romance between fated mates.