Hi guys! We have Sam Burns popping in today with her new release Wolf In The Holly, we have a great excerpt and a fantastic giveaway so check out the post and enter the giveaway! <3 ~Pixie~ 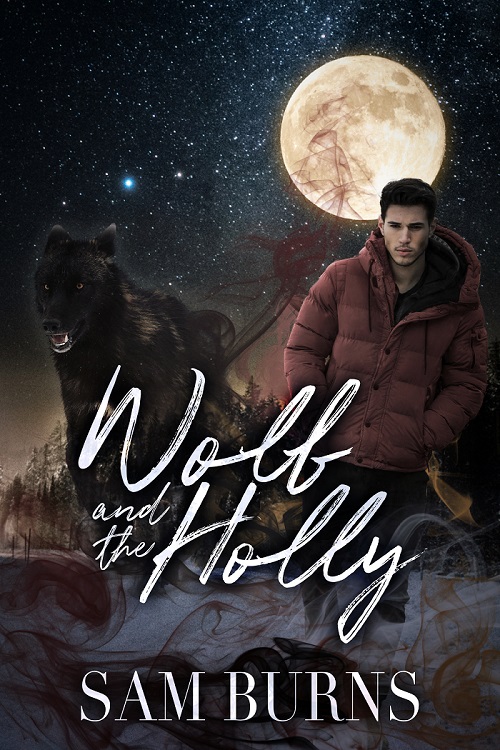 Wolf And The Holly

(The Rowan Harbor Cycle 02)
by

Five years ago, Jesse dropped out of college and came home to Rowan Harbor to find safety with his pack. A broken man, he’s been living as though the world is ending—allergic to responsibility and spending most of his nights at the local bar.

But he can’t avoid growing up forever. On the night of his thirtieth birthday party, he finds his childhood friend Isla unconscious, attacked in the middle of their peaceful hometown. The wolf inside him wants to protect its people from the slick-haired, smooth-talking vampire who’s brought trouble to town, and Jesse can’t run from his instincts any longer.

Now that his inner wolf is out of its cage, it’s picked the most inconvenient moment to find its mate. Sean Anderson—recently back from college and much changed from the skinny preteen Jesse once knew—is just what he never knew he needed.

Trigger Warning: discussion of past abuse.

This novel is intended for adult audiences, and contains swearing and sex.

This is the second of nine books in The Rowan Harbor Cycle, not a standalone. It continues where the first book left off. Jesse and Sean will return in book five to continue their story, so this book contains a HFN, not their HEA.

The door of the bar opened, and a freezing December wind swirled into the room. There were grumbles about closing the damn door in the two seconds it was open, but the only thing Jesse could focus on was the scent the wind had brought with it.

It was horrible, like ashes and decay covered with a thin veneer of something resinous and perfumed.

“I hear this is the in place to be in Rowan Harbor,” a rough, masculine voice said, sounding amused.

Everyone else had turned to look at the newcomer, but Jesse hadn’t budged. That was why he saw Cassidy’s shoulders stiffen and square as though bracing for a blow.

Something ugly whispered in the back of Jesse’s mind at the familiar image. You can’t brace for the blows aimed at your psyche.

“Sol,” Cassidy said, voice quieter and more serious than usual. Instead of continuing with a greeting, she turned back and started scrubbing the bar down again. “You can’t smoke in here.”

Jesse turned to look at the newcomer, and sure enough, a cigarette hung from his lips. He looked like he was trying to be a modern-day James Dean. Or rather, since he had the distinctive vampiric lack of heartbeat and regular breathing, maybe a time-appropriate James Dean.

Wade, and for once Jesse wanted to hug him for being a rule-obsessed lawman, pointed at the large, red, “No Smoking” sign behind the bar. “Local ordinance.”

The guy, Sol, rolled his eyes. He took the cigarette out of his mouth, pulled one foot up, and stubbed the disgusting thing out on the sole of his boot. He held it up as though asking what to do with it, and Wade jerked a finger toward the trash can near the door. He flicked it in, giving Wade a lazy smile and sauntering over to the bar.

“Suppose you puppies don’t like the smell?” he asked, and his tone was friendly, but Jesse didn’t like it anyway.

The way Cassidy reacted had told Jesse everything he wanted to know about the newcomer. It was rude and inappropriate to make a snap judgment like that about a complete stranger. It was a good example of why Jesse wasn’t suited to the leadership role the town expected him to take. But anyone who made the usually unflappable Cass react like that was in the doghouse, as far as Jesse was concerned.

Wade, proving again that he was the man the town really needed, didn’t rise to the bait. He just shrugged. “Personal preference doesn’t come into the law.”

The guy just gave a nonchalant smile and sauntered over to take a seat at the bar. “Gin, Cassie? And introduce me to your friends.”

Covering her earlier discomfiture, Cassidy smiled and grabbed a glass and bottle—bottom shelf, Jesse noticed—and set them in front of him.

“Everybody, this is Solomon White. We used to work together.” She paused and looked around the bar, then waved a dismissive hand. “Sol, this is the gang who hangs out here.”

The guy laughed. “You can’t convince me that this young pup isn’t an officer of the law,” he said, looking Wade over in a way Jesse really didn’t like. “Times have changed since we ran bathtub gin into Manhattan, but I don’t think cops spend that much time in bars, do they?”

“Sounds like somebody’s fallen behind the times,” Max said, coming out of the back. “You’re gonna have to learn to keep up with the modern era if you’re gonna make it, kid.”

Sol rolled his eyes as he grabbed the bottle of gin and poured himself a glass. “Ahh, the elder generations.” He leaned into Evie conspiratorially. “Always think they have things to teach us kiddies, don’t they?”

Max stopped to lay a hand on first Devon, then Jesse, as he headed toward Sol. “Nothing to teach you, kid. Unless you count that you need to check in with the sheriff’s office in the morning.”

“Why the hell would I do that?”

Max leaned into the man, his voice low and cold in a way that Jesse had never heard it before, despite the fact that he didn’t generally think of Max as a warm sort of guy. “Because this town takes care of our people, and we take care of them back. You go through the blood bank, or you go right back the way you came.” The way he said it made Jesse shiver. The words themselves weren’t overtly threatening, but the threat in his tone was more than clear.