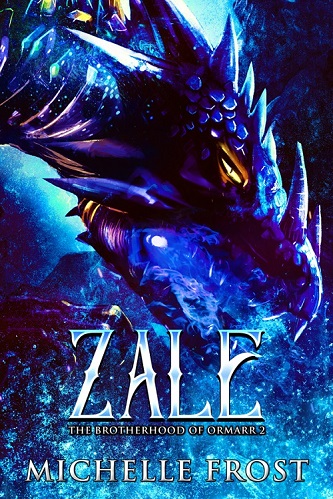 Series: The Brotherhood of Ormarr 02

Blurb: Davis~
It was just another job—at least it was supposed to be—but snaring the feisty blue dragon I’d been contracted to collect and her rider in my trap changed everything. Hunting dragons was my job, and I was damn good at it. I’d never missed a target. Never failed to make a delivery. So why was every step toward turning over my bounty suddenly a struggle? No quarry had ever managed to get under my skin, but something in Zale’s haunting blue eyes called to me like nothing ever had before.

Zale~
When Itsaso and I were kidnapped, we fought like hell but found ourselves at the dragon hunter’s mercy. He locked my dragon away, leaving me to face captivity alone. Now, all I have to rely on is the training that’s been drilled into me every day for as long as I can remember and biding my time, waiting for Davis to make a mistake. Or my brothers to find and rescue us. But something happened the first time I truly looked in Davis’s eyes, dark pools as deep and enchanting as the sea, and I realized I was in so much more danger than I thought. How could a ruthless dragon hunter be my perfect mate?

Zale is the second book in The Brotherhood of Ormarr series. While each book focuses on a different couple, the overall story arc continues in the next installment. For maximum enjoyment, we suggest reading in order. Zale is a m/m romance, and is recommended for adults 18 years and older.

Review: Davis is from a clan outside the Brotherhood of Ormarr, a clan who is determined to stop the wraiths and the people who lead them. Ordered to capture a man and his dragon caught on film leading a wraith attack Davis accepts the mission with glee, but the man he kidnaps is tempting in a way that Davis can’t resist no matter how hard he tries.

Zale is enjoying some peace with his dragon Saso when he’s captured and Saso bound to his arm, all Zale can think about is that the Order has captured him. But as time passes he finally discovers why he’s been caught… and it leaves him astounded. His captor may be his mate but Zale won’t let that stop him from escape.

This is an excellent addition to The Brotherhood of Ormarr series. We rejoin the Ormarr brothers with Zale’s story and boy is it a doozy. Zale is kinda lonely, wishing he has what his older brother Azaran has but what he gets is kidnapped and told that he has to answer for his crimes. Davis longs for something long lost and when he’s tasked to bring in a dragon rider who has betrayed his own kind Davis is determined to make him pay.

Now as you know the bond between mates is strong but both Zale and Davis fight it as they view each other as the enemy, but it does help them to listen to each other and get to the bottom of the problem.

This is an excellent story that progresses far quicker that the first book Azaran, in Azaran we were given the background and history and now in Zale the overall ARC of the storyline is more fleshed out, progressing very quickly to the next step but not giving away any secrets, so there’s still much to look forward to in the series concerning the overall ARC.

Zale’s story has him finding his mate but gives him challenges to overcome, Davis isn’t just a filler character either he has his own devastating background but he also has a shocking discovery which leads to an astounding scene that greatly pleases. Now as a couple they are fantastic, they overcome their rocky beginning are hot together but don’t rush things between them. It’s a nicely paced relationship (well for fated mates anyway LOL)

Michelle Frost has written an interesting and exciting story that flows beautifully and keeps you turning the pages. It has excitement and a dash of danger, with a great storyline that expands on the series ARC whetting your appetite for more. An excellent read for anyone who loves paranormal romance.