Hi guys! We have J. Alan Veerkamp stopping by today with his new re-release A Cook’s Tale, we have a great excerpt and a fantastic $10 NineStar GC giveaway so check out the post and enter the giveaway! ❤ ~Pixie~ 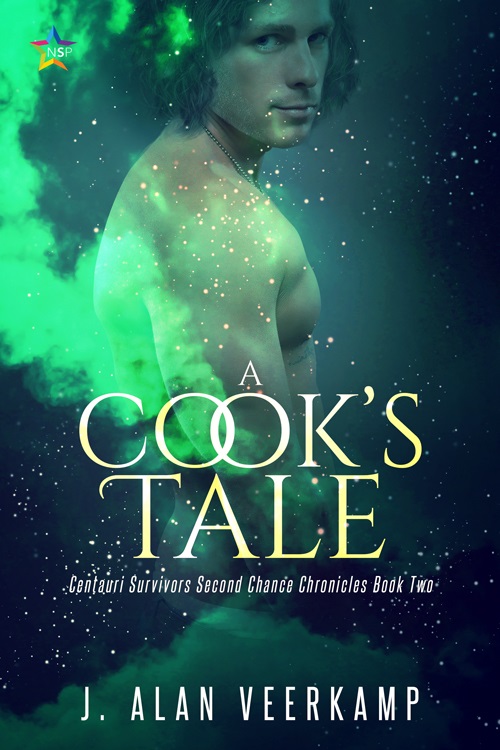 After a breakup, Erron Murfin finds himself broken, homeless, and destitute. The chance to become the Santa Claus’s new cook is a beacon he can’t ignore.

The new position allows him to work under Gamin Rockwell, the man who helped raise him until he disappeared when Erron turned nineteen—well over a decade ago. While the two make up for lost time, Erron catches the eyes of many crewmen as well as James and Barrus, a married pair with real intentions who are determined to draw the cautious new arrival into their relationship.

Even as he stitches together his ability to see a future for himself, Gamin’s history and personal issues begin to surface. Secrets bubble out in ways Erron can’t ignore and he finds himself with a mystery he needs to solve.

Because there’s something about Gamin that goes far deeper than the fatherly role he once held in Erron’s life so long ago.

Erron looked down at the synthesized protein masquerading as eggs on his plate. How this diner justified serving this travesty was beyond him. Even the smell was wrong. It was nothing like the meal he had eaten during his interview yesterday. He picked at the unyielding rubber surface with his utensil and promptly set it down on the table. There was no way he was eating this. The triangle of toast was passable. At least they had real bread. It wasn’t helping to settle his stomach, though, because his nerves were so on edge.

This diner in the spaceport was close to the Santa Claus’s landing bay. It was really the only reason he had chosen it. It certainly wasn’t for the four-star cuisine. At least from his seat, the anti-grav pallet was visible, holding the crates with all his worldly possessions. Erron had packed as soon as he’d returned to his room the day before. When he’d realized he couldn’t sleep worth a damn, he had given up trying. Now he had time to burn before his appointment. He wasn’t sure if showing up too early was good or not. He didn’t want to seem too eager.

Captain Danverse had told him he’d meet with his security chief for his indoctrination. There was a ship tour, procedures to go over, and a work contract to sign. Two years off planet wasn’t really so long. From what he’d researched, most crew members extended their contracts multiple times, so the Santa Claus couldn’t be that bad. On the plus side, he’d be allowed to cook for others again. That might make up for most shortcomings. Erron was fairly confident he was doing the right thing. Fairly.

It wasn’t as if he had much choice. He needed the job. When the server brought the bill for his breakfast—rather than call it a travesty—he cringed when he pressed his finger to the DNA ID scanner. If there hadn’t been enough credits in his account, he would have been in trouble.

He didn’t know why he continued to sip at the bitter, burned coffee. It certainly wasn’t doing his stomach any favors. The diner was stocked with a fair number of customers. Apparently, being cheap overrode the food quality in this establishment. Erron mentally kicked himself. Being a food snob was one thing, but being an elitist ass was something else. These people probably hadn’t spent three months living in shitty hotels.

The patrons seemed mostly working class, enjoying their breakfasts. No doubt some were station regulars, who chatted with the servers and cook with a family-like familiarity. A warm camaraderie filled the place and that made Erron smaller somehow. What he wouldn’t give to belong somewhere. He’d lost that when Toby hadn’t even fought for him as he was fired and evicted.

It wasn’t fair. Erron thought he’d had everything: a loving partner, a job he excelled at, and a promising future. All of it scrubbed away without so much as an acknowledgement of regret on Toby’s part. A young man and woman walked into the diner and sat at the counter, holding hands the entire time. The ache in his chest twisted deeper. Fucking heteros.

The coffee had long since gone cold, but somehow it tasted better that way, so he waved off the server when she tried to refill the mug. Erron looked at the time glowing in amber numbers on the wall. An hour more, then he’d start his new life.

The door hissed open as an older woman in filthy, tattered clothes shuffled into the diner. The staff ignored her from the moment she stepped across the threshold. Perhaps they knew better than to engage her. Erron was about to follow their example when her gray stare suddenly bore down on him.

With a stern purpose, she strode over to his table. Erron startled when she clamped her dirty hand on his wrist. He pulled back slightly, but her grip was firmer than he expected.

“You’ve lost someone very close to you.” Her voice was raspy, and Erron couldn’t help but look into her glassy eyes.

“You’re about to travel a great distance.” She continued to speak as if she was barely aware of his response.

Erron’s brow furrowed. “I am in a spaceport.”

“Someone will be on board that you thought you’d lost long ago.”

Surprise froze Erron in his seat. Gamin was on board. It had been years since they’d laid eyes on one another. Part of the gnawing at his gut was whether Gamin would be happy to see him or not. Erron had given up a long time ago asking his mother about what happened between them. She took the story to her grave. He loved his mother and missed her, but he’d never completely forgiven her for it either.

“You think you’ve lost the ability to love another, but you’ll find it on board once again.”

Words refused to form when Erron opened his mouth. A psi on this side of the galaxy? He’d never met one before. Para-humans were few and far between. What were the chances she was telling him his future? She stood silent as he pondered. It wasn’t so much that he believed her. Deep down, he just really wanted to.

“Do you see anything else?” Erron’s response was timid and quiet. While spending years more focused on visual arts, J. Alan Veerkamp never let go of his innate passion for storytelling, wanting to write and draw comic books when he grew up. Once he discovered M/M fiction, a whole new world opened filled with possibilities. Why couldn’t you have fantastic and dynamic sexy tales with an M/M cast? He started reading the online tales of authors like, Night Tempest, Rob Colton, and Alicia Nordwell, which only fueled his need to create. Eventually he found GayAuthors.org, and with a little coercive nudge, started sharing his tales with an unexpected level of positive response. The experience and support gave him the courage to cross his fingers and aim for the world of M/M publishing.

Born and raised in Michigan, J. Alan continues to type away, wishing it was practical to use an noisy, old fashioned keyboard that clacks with each strike, if just to annoy his loving partner and spoiled miniature dachshund.