Hi peeps, we have J.C. Long popping in with the tour for his new release A Matter of Justice, we have a great excerpt and a fantastic $10 NineStar GC giveaway, so check out the post and enter the giveaway! ❤ ~Pixie~ 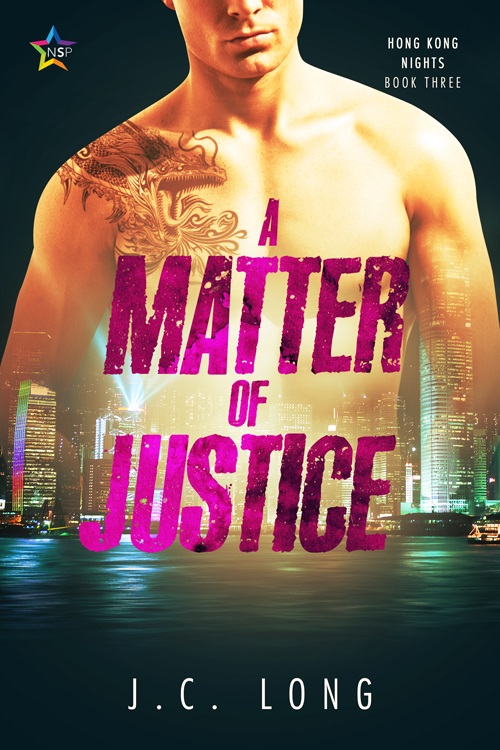 A Matter of Duty

The battle between the Dragons of the Eastern District and their bitter rivals, the Twisted Vipers, is reaching a dangerous point. The Anti-Gang Task Force is hard at work trying to bring down the Vipers. Tensions ratchet when Johnny Hwang guns down a prominent inspector on the task force, and Conroy Wong, Wei Tseng’s second-in-command is a witness. Now, to keep him safe long enough to locate a second witness and put Hwang behind bars, Conroy is forced into close quarters with Allen Hong, a man who once fought side by side with the Dragons until he turned his back on them by joining the police, betraying them. As sparks fly between them once more, the two men must put aside their differences and work together, because the Twisted Vipers aren’t going to let Hwang go down without a fight.

Inspector Richard Yang was not at all surprised when he received word from Johnny Hwang’s people that Johnny wanted to see him. Actually, he wondered what had taken Hwang so long; he’d made the arrests three days ago, and they’d been all over the news and in newspaper headlines.

Hong Kong Police Department Anti-Gang Task Force makes headway with the arrests of three highly influential and well-placed members of the Twisted Viper triad. It was long and wordy, as far as headlines went, but it spared anyone the need to read the damn thing. No one read newspapers nowadays, especially with the Mainland trying to crack down on the press.

Yang debated whether or not he should take Hwang up on the offer, finally deciding that it would be amusing to hear, if nothing else. Just after six in the evening he left the apartment he shared with his wife of forty-one years and made his way to the meeting place Hwang had suggested, a ye shi not that far from Aberdeen.

The night market was just beginning to see a lot of visitors when Yang arrived, but there was still parking space available near the market’s entrance so he didn’t have to walk that far. It wasn’t that he couldn’t; he was a tough old bastard, even at sixty, and got more than his fair share of exercise as a member of HKPD. He wanted to have a quick getaway available for him in case Hwang decided to pull some shit.

He doubted he would, it being a public place and all, but he’d learned in his years on the force to be very careful with criminals, especially the crafty ones. And Johnny Hwang was about as crafty as they came, at least in Hong Kong. Still, the market was a very public place, and if Hwang were to do something, it would cause a lot of complications, so Yang didn’t expect trouble.

Hwang’s message said to meet him near a noodle stall called Mrs. Chu’s Noodles. Considering how many food stalls went up in the night markets, Yang thought it would be a problem, but almost as soon as he entered, he saw a sign over a large noodle stall that read “Mrs. Chu’s.”

Mrs. Chu’s stall was easily twice the size of the other stalls around hers and had about the same advantage in customers. Behind the stall an older woman with slate-gray hair in a hairnet bustled about, tending to her customers, who were seated along three sides of the square that was her stall.

“Mr. Yang.” A young man—thirty-three or -four at the oldest, young by Yang’s standards—in a well-tailored suit approached him, giving him a polite and respectful bow of his head. “If you would come with me, Mr. Hwang is waiting for you.”

“Well, at least one thing can be said for your boss,” Yang said as he followed the man to where Hwang sat in the farthest seat along the right side of the square, where he could be partially concealed by the stall itself. “He’s got you puk gai trained to at least pretend to be human beings.”

If his words irritated his escort, he didn’t show it.

Johnny Hwang was almost finished with a bowl of ramen when Yang joined him, a cloth napkin covering the front of his dress shirt. Slurping a long line into his mouth, Hwang gestured toward the chair next to him.

“You’ve got to try the noodles here.” Hwang motioned toward the woman—presumably Mrs. Chu—who immediately moved to dip out a bowl of noodles for him.

Yang shook his head to signal to her he didn’t need anything. “I’m not here to sample the fare with you, Hwang. So why don’t you tell me why I’m here—not that I don’t already know.”

A vein throbbed in Hwang’s temple at Yang’s words, but he otherwise showed no reaction. “Straight to business, then? Yes, of course—I imagine you’re quite eager to get back home to your lovely wife.”

The observation was not made with any particular tone, but Yang recognized it for what it was: Hwang making it clear he had done his homework on Yang. It also reeked of the potential for a threat. The implication that his wife might get brought into this did not have the effect Hwang most likely desired. It just pissed him off.

Yang could feel the heavy gaze of the Twisted Viper’s leader as he observed him, looking for some sort of reaction.

Making sure to keep his words and expression casual, Yang replied, “Something like that, yeah.”

“Well, I guess we’re both busy men, so I will cut right to it, since you insist. Your Anti-Gang Task Force recently arrested three men—”

“You’re referring to the three members of your triad that I brought in for possession of illegal weapons and drug trafficking, right? Just so we’re clear.”

Hwang’s lips drew back in the slightest sneer. “I do believe you’re purposefully irritating me, Mr. Yang.”

“Not at all, Hwang.” Yang left out the respectful prefix, ensuring that it was glaringly noticeable in its absence. “Perhaps you’re simply not used to people calling you on your bullshit. I’m not one of your underlings, so don’t expect me to act like it.”

Over his shoulder, Yang could hear the sharp, angry intake of breath from his escort. Hwang, though, just sighed melodramatically. “This would go so much faster if we could just be civil to one another.”

“This would go so much faster if you’d just say what you came here to say,” Yang replied. “But since you want to just beat around the bush, let me save you the trouble. If you’re going to ask me to release your men, the answer is hell no.”

Hwang finished the last of his noodles, pushing the bowl away from him and giving his stomach a satisfied pat. “Delicious. Mrs. Chu’s noodles are truly the best I’ve ever had in Hong Kong.” He made a motion with his right hand, smooth and simple. Yang’s earlier escort stepped over to Mrs. Chu and paid Hwang’s fee.

“And no,” Hwang went on, crossing his legs as he relaxed back, no doubt to ease the tension on his stomach post eating. “I don’t give a fuck about those three—they got caught; they deserve what happens. What I want from you is for you to turn your attention elsewhere. Leave the Twisted Vipers alone. There are plenty of other triads on the island you can take off the streets. It would certainly look better for you to get some victories, wouldn’t it?”

“I’m not scared of you or your task force, Yang.” Hwang sneered, straightening. “However, it is becoming a slight inconvenience as far as my business interests are concerned. Naturally I don’t like it when anyone messes with my money. It’s a simple request: take the Twisted Vipers out of your sights for a while, clean up the riffraff wannabes on the edge of the island, or the Dragons. Just stop focusing on me and mine.”

Yang couldn’t help it; he laughed, a deep, rumbling belly laugh that moved through his whole body. “I’m curious, Hwang. Did you really think I was going to say yes to the offer?”

Hwang’s face had gone cold when Yang began to laugh. “You should think about this seriously, Mr. Yang. You’ll live longer.”

“My mother-in-law was Korean. My wife makes kimchi damn near every day. I read somewhere that kimchi is one of the healthiest foods in the world. I like my chances of living longer.”

Yang stood, and Hwang did the same. “You have a good night, Hwang. Try not to do anything illegal.” One thought on “A Matter of Justice by J.C. Long Release Blast, Excerpt & Giveaway!”