Hi guys! We have R.R. Campbell stopping by today with his new release Accounting for It All, we have a great excerpt and a brilliant $10 NineStar GC giveaway so check out the post and enter the giveaway! ❤ ~Pixie~ 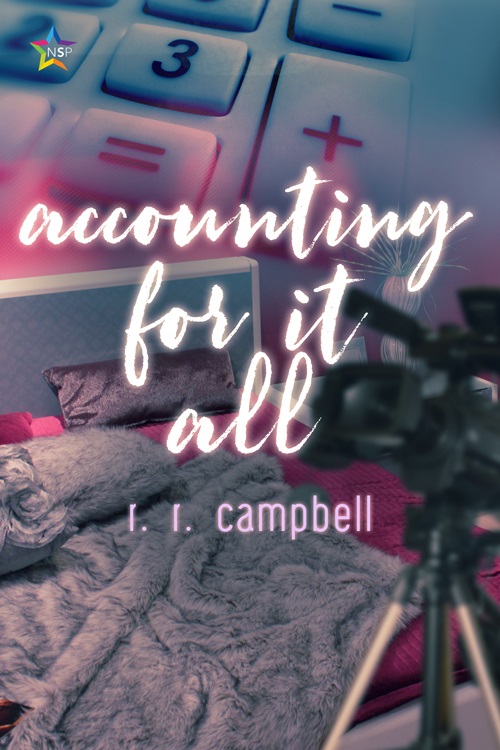 Accounting for It All

Former porn-star Robin Whethers has skated by as Pornucopia’s do-nothing accountant for years. And who can blame her? Her supervisor has only encouraged her dillydallying, and it’s given her oodles of time to do what she loves most: coach the talent at her mentor’s all-female pornography studio.

But then the IRS comes knocking. With her supervisor unable to bail her out, Robin can either come clean and risk her friendships and career, or buck up and find another way to skirt the system. No matter how she chooses, along the way she’ll have to confront both her blossoming feelings for the man she’s enlisted to teach her accounting and the return of the woman she’s always loved, who’s finally ready to try to make things work.

This lighthearted yet evocative tale of one woman’s quest for self-actualization is sure to please anyone who’s ever made the wrong choice for the right reasons.

Accounting for It All, R.R. Campbell © 2018, All Rights Reserved

Thursdays are my favorite days at Pornucopia.

For starters, it’s payday, and second, it’s in-house filming day, which means after a whole week of waiting, I finally get to work as a talent consultant again.

But it’s the simplest of things that make Thursdays the best of days, and there isn’t anything more predictable than the Thursday morning safe-looting operation.

Before I make it to the safe, though, I stop in the doorway of Jerry’s office for our routine Thursday conversation. “Morning, Jer.”

“We’re still doing this, huh?” He says it with a grin, so between that and me being—in his words—“a prized former starlet,” I know he doesn’t mind my teasing.

“I’m betting we only have a few thousand in the safe this week. Still want me to—?”

I repeat “always go to the bank” with him as he says it for the second time. “Right. How could I forget?”

I keep moving my way down our skinny, second-floor hallway and enter my office through the last door on the left. After I plop to my knees at the base of the filing cabinet, I ease out the bottom drawer. It slides with a terrible squeak—Jerry still hasn’t lubed it up with WD40 like he promised—and I lift the half-rusted safe from it, my palms running along its cool steel.

I punch in the combination and the safe clicks open, revealing the fat stack of cash inside. If Jerry’s makeshift receipt can be believed, we’re a tick under sixty-two hundred bucks.

As I double-check Jerry’s count, the graininess of each bill wears on my thumb. It’s probably my least favorite part of the safe-looting scheme, what with how tedious it can be. Honestly, for as much as I love the Thursday morning charade, I’d much rather be back talent-consulting full time. Or heck, even acting.

After all, getting paid for five days of work a week when I really only have one? That’s a pretty sweet deal, if I do say so myself.

I wrap up counting Jerry’s stack of bills—a bit under six thousand two hundred, just as his scratch-paper receipt says. No need to count again; they’ll do that at the bank anyway. I wad it all together with a rubber band and exit my office.

Out in the hallway, I figure I may as well tease Jerry one last time before slipping downstairs and out the door. “Hey, Jer?”

My eyebrows knit when I hear nothing from him. I could’ve sworn I heard him shuffling around hardly a minute ago.

“Hey, Jerry.” Again the only response I get is my own breathing and the soft pad of my ankle-cut Chuck Taylors on the tiled floor.

I step into his office. “Hey, Jer. Looks like we only have a few thousand—”

There, facedown on his desk, rests the motionless body of Jerry Chalmers.

I drop the chunk of cash and rush to his side. “Jerry. Hey.” I shake him. He doesn’t stir. My fingers fly to his neck, then to his wrists in search of a pulse. Nothing.

After dashing back to my office, I fumble through my purse for my phone and dial nine-one-one.

Thursdays are normally my favorite days at Pornucopia, but this Thursday might change all that.