Hey guys! We have R.J. Scott & V.L. Locey stopping by today with the tour for their new release Across The Pond, we have a fantastic $10 Amazon GC giveaway so check out the post and enter that giveaway! ❤️ ~Pixie~ p.s. keep an eye out for Prime’s review coming soon! 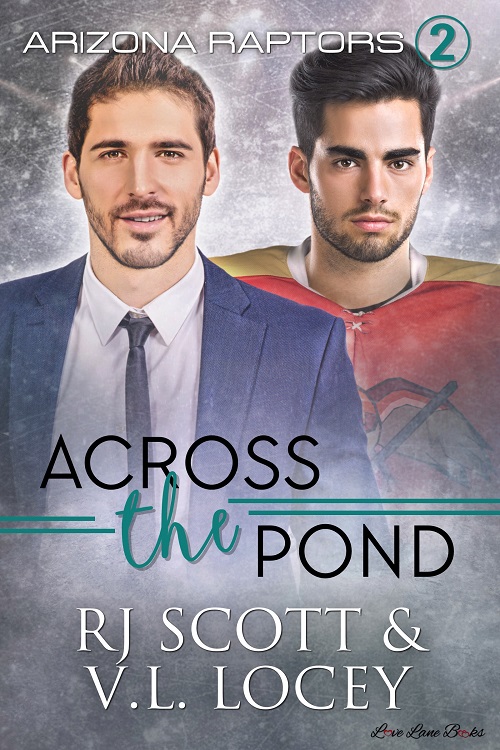 The greatest journey isn’t from England to the States, it’s the one that two men take on the way to find each other.

Sebastian Brown is on a mission to rescue the Arizona Raptors and a vow he made to a friend in college. Either that or he’s on vacation. He’s not entirely sure that he’s made up his mind yet. Either way, traveling from England, to the arid desert of Arizona isn’t exactly a picnic, particularly with the doubts and worries he takes with him. He’s turned even the worst of companies around, but faced with the challenge of improving the reputation of a hockey team that everyone seems to hate, he knows his work is cut out for him.

Focus is key, but that is easier said than done when Seb is sent into a tailspin by the intriguing Alejandro. Seb’s entire marketing plan hinges on making Alex a poster boy for equality and fair play. But with Alex’s utter dedication to the game, and his dark secretive eyes, the gorgeous Alex is stubborn, opinionated, doesn’t want any part of being the team focus, and worst of all, doesn’t appear to like Seb at all. It takes everything that Seb has to keep his hands off of Alex, but things get out of hand and Seb’s life might never be the same again.

Alejandro Garcia has had to work hard to get where he’s at. Born to Mexican immigrants, his siblings and himself have never had it easy in this new country their parents dreamed of calling home. A native son of Arizona, Alex has always been the odd man out on the ice but he’s not going to let a stupid thing like his heritage get in the way of his dreams. He’s now a Raptor and he plans to put all that training and collegiate hockey experience to good use. Working hard comes naturally to him. It’s something his parents have instilled in him from the time he was a toddler. Being one of a handful of Latino hockey players makes him strive for success with even more determination. His first pro season has had some ups but a lot more downs, but Alex is one stubborn young man and failure is not an option.

As the Raptors struggle to rebuild not only their team but their core values, Alex finds himself drawn to one of the owner’s friends, a tall, lanky Brit with the face of an angel and an accent and attitude that bewitches and befuddles him. Sebastian is everything he thought he would never be attracted to but he can’t push the sexy, older, fun-loving man out of his thoughts. If ever there were a man he would not be able to take home to his parents – not that he can bring a man home since he is deeply closeted – it’s Sebastian, but desire knows no socioeconomic, age, or international borders. The heart wants what the heart wants and Alejandro’s wants Sebastian.