Hi guys! We have Martin Delacroix stopping by today with his new release Adrian’s Scar, we have a great excerpt and a brilliant $10 NineStar GC giveaway so check out the post and enter the giveaway! ❤ ~Pixie~ 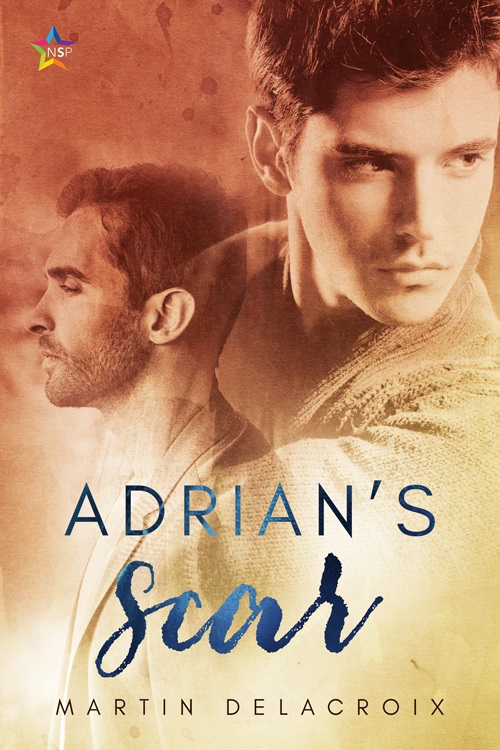 After Kai Olsen’s “perfect lover” dies in a cycling accident, Kai takes a part-time job teaching at a community college to fill his empty evenings. When Kai’s student, Adrian Knox, shows an interest in Kai, their lives quickly change. Adrian is dominated by his controlling mother, Kai can’t stop obsessing over his lost lover, and school policy says faculty members can’t date students. Does love between Kai and Adrian stand a chance?

I was thirty, and my partner of five years, Christopher, was gone. An octogenarian driving a Sedan Deville ran over Christopher while he trained on his ten-speed bicycle. Christopher died instantly.

Some mornings, after the accident happened, I’d wake up and turn over in bed, expecting to find my beautiful Christopher hugging his pillow while sunlight reflected in his dark hair. And then I’d remember.

Christopher was a remarkable person, a gourmet cook who competed in triathlons and sewed the drapes hanging in our home. A pediatric hematologist, he treated kids with leukemia and hemophilia. I let him choose my clothes because he knew what matched with what. Like me, Christopher was organized, a true neatnik, and our home sparkled. We kept everything arranged just so, from the living room and kitchen to the closets and attic.

Now Christopher was gone, and I knew in my heart that no one could ever replace him.

In my bedroom, on the bureau, I created a sort of “Christopher shrine”: framed photographs, his sports medals and trophies, his wristwatch, and the gold necklace I’d given him for his twenty-ninth birthday. He wore the necklace at the time of his death.

I framed a letter he wrote me when he attended a medical conference in Montreal, and now the letter sat among the memorabilia. I kept a scented candle on the bureau and often lit it. I’d sit cross-legged on the bed, staring at the display while tears rolled down my cheeks.

Oh, Christopher, why did you have to leave me?

Evenings were hardest. I’d come home from my law office to an empty house. I had no one to discuss the day’s events with and no one to share a meal with. I took to eating frozen dinners, the kind I could pop into the microwave. I lost fifteen pounds and looked like a scarecrow. I felt lonely as hell and finally decided I should fill my evenings with some kind of activity. But what?

“There’s a paralegal program,” David said. “I know the department head, so I can put in a word if you’d like.”

I interviewed with Susan Stouffer, David’s friend, a petite woman in her forties with an easy smile, a strand of pearls, and a cluttered office. Textbooks choked her bookshelves. Her desk was stacked with file folders and legal journals.

“This is a four-year program,” she told me, “and our standards are high. I think you’ll find most of our students are bright and earnest. Many are middle-aged, looking to start a second career.”

I would teach a course called Introduction to U S Law and the Judicial System.

“It’s a survey course,” Susan said. “You’ll give them a taste of each area of substantive law: torts, contracts, family law, constitutional law, and so forth. You’ll also teach them court procedure; you’ll explain the state and federal court systems, and the Florida statutes too.”

“Adjuncts aren’t paid a lot,” Susan said. “You might call it a labor of love.”

Susan gave me three different texts, a syllabus, a campus map, and a key to my office. “Visit the personnel department. You’ll need to sign forms and get your parking decal.”

The campus was perhaps fifty acres, much of it shaded by live oaks and long leaf pines with trunks as big around as oil barrels. The buildings were contemporary, with lots of glass and cream-colored brick, all connected by concrete walkways winding through swaths of Bahia grass. Classes were not in session that day, so few folks were about.

Located in a one-story portable, my office was a cramped space with a desk and a swivel chair, a laminate bookcase, two folding metal chairs, and a telephone. My windows faced west, and afternoon sunlight slanted in through the venetian blinds. The paneled walls were barren, the carpet coffee stained.

If Christopher had been present, he would have rubbed his hands together and clucked his tongue. He might’ve said something like, “This place needs livening up: plants, framed posters, and maybe curtains.”

How I missed him.

A knock sounded on my door, and when I answered, a wiry guy my age with huge brown eyes stood in the hallway, clutching a briefcase. His skin was dark as chocolate, his hair onyx and straight as straw. His pudgy lips were a purple shade. I was six one and probably had half a foot on him. He wore a starched white shirt, khaki pants, and leather slip-ons.

“Are you the new adjunct?” he asked.

We shook, and I told him I was Kai Olson.

With his thumb, he pointed over his shoulder.

“My office is across the hall. Elegant digs they give us, eh?”

I grinned and bobbed my chin. His voice had a lilting quality I found appealing.

He nodded. “Very much. This will be my fourth year at the college. After law school, I took a job at a firm; I performed real estate and corporate work.” He shook his head and rolled his eyes. “I worked sixty-hour weeks, and it was boring as hell. This job pays less, of course, but I prefer the academic life.”

He shrugged while rocking his head from side to side. “It’s not difficult,” he said. “But listen, if I can be of help, you must let me know. We are all friends here.” Martin Delacroix is a former journalist and trial attorney. He writes short fiction and novels. His short fiction has appeared in over twenty anthologies and he has written several novels. Martin lives on a barrier island on Florida’s Gulf Coast. When he’s not writing he enjoys beach walks, playing his guitar, gardening, cooking, and distance running. He enjoys good wine and conversation. Find out more about Martin on his Website