Hi guys, we have Andy Gallo popping in today with the tour for his new release Better Be Sure, we have a brilliant guest post from Andy, a great excerpt and an awesome giveaway where there’s a $25 Dreamspinner GC, two audio codes, and 3 x $5 Amazon GC’s up for grabs… and there’s a comment giveaway for a choice from 2 ebooks. So guys check out the post enter the rafflecopter giveaway and leave a comment for the blog post giveaway! ❤ ~Pixie~ 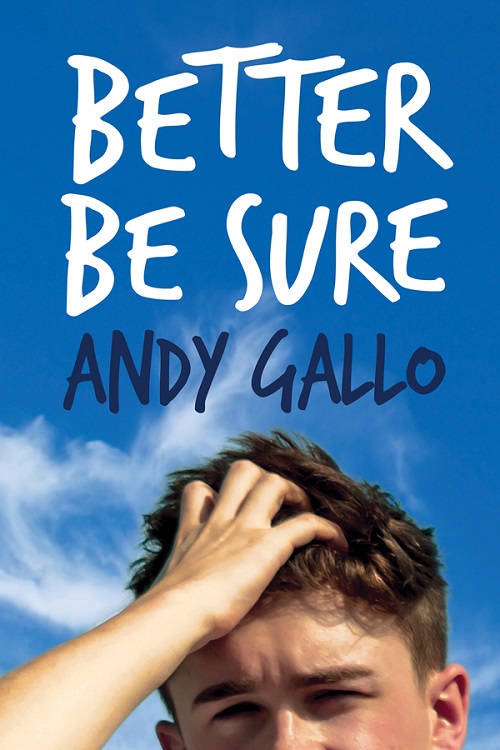 When the stakes are this high, you better be sure you can win.

Jackson Murphy lost his parents to a boating accident, but they’re never far from his thoughts. He attends the same university as his parents, joined the same fraternity as his dad, and even lives in his father’s old room, along with his adopted brother Marcus. Life brightens when he meets the man of his dreams.

Edward Knowles trades full-time college for working during the day and community college at night when his father’s factory closes. He intends to stay deep in the closet to keep his job in heating and cooling. But Jack pushes all his buttons.

Jack’s college rival challenges him to bring a date to the upcoming dance. He goads Jack into accepting even though failure means he and Marcus will lose their room and Jack must leave the fraternity.

Jack is falling hard for Ed, but Ed will never agree to go the dance. Ed—not knowing the stakes of the wager—has also made it clear that Jack taking another man will end their romance.

With pressure from friends and enemies alike, will Jack hold on to his legacy… or his heart?

Where in the World…

Thank you, MM Good Book Reviews for having me today.

Where in the world is…. As kids, that meant we tried to figure out where Waldo was traveling. But as readers and author, we want to know where the story takes place. And, well… I’m not telling you where Better Be Sure is in the world.

It wasn’t a conscious choice to ‘hide’ the location, it just never came up. In my mind, Harrison University (which exists only in our minds) is somewhere in the mid-Atlantic region of the United States. I’ve always written it with the thought it was in Pennsylvania or Delaware, but that’s never been decided.

The reason we didn’t site the story was to avoid comparisons with real places. But in order to create a place you need to have an idea of the area you’re creating. You can’t talk about snow if you’re in southern Florida (except as an aberration), nor can you discuss going to the beach for the day if you’re in middle of Nebraska.

Plus, certain places have different ‘feels.’ I’ve lived in a few different places and they are not the same. On the east coast, there is a robust train system. It might not be great, but there are commuter trains and the national service available in most major cities north of DC. In the heart of the Mid-West there are freight trains and maybe an Amtrak, (the national carrier) but most places don’t have a subway, commuter line, or regional train service. Generally they just buses.

There is also what I call a distance disconnect. I grew up on the east coast near New York. Boston was about a five hour drive away. In our minds that was far. It wasn’t a spur of the moment decision to go there for the weekend.  When I lived in Minneapolis, Minnesota, the city of Madison Wisconsin was five hours away, Chicago was eight. Those places weren’t far, they were five and eight hours away. That’s because for many people, the nearest big city was five or more hours away. And ‘big city’ was relative term.

So to the point, in order to keep your characters true, even if you don’t pick a real place, the author needs to know where they live generally. Otherwise landlocked friends are going to be talking about taking a non-existent subway to a non-existing beach, acting like the snow storm they’re in is a common thing when in fact it’s once in a generation.

Don’t take from this post that I prefer made up places to real ones. I think the opposite really. For me, it is much easier to write about a place if I know what it looks like instead of trying to make it up. Sometimes, however, you need to create your town out of the ether. Better Be Sure was one of those times.

In addition to the tour wide contest, at each stop on the blog tour, Anyta and I are giving away eBook copies of (Un)Masked) – which we co-wrote – and Leo Love Aries – the first book in Anyta’s Signs of Love series. To be eligible, leave a comment below and tell us something unique about your region that might be different from other places. We’ll pick one winner for each book*

*Readers are eligible to win one eBook during the tour and one of the three grand prizes.

Jack’s phone buzzed, and he swatted the sound away. Too early in the damn morning. Another buzz. He drowsily pulled himself from sleep. Across the room, Marcus mumbled in his sleep.

Jack checked his phone, body surging to life at Ed’s name on the screen.

Ed: Oh, crap, it’s probably still too early for you.

Jack couldn’t type back quick enough. Ed writing to him this early in the morning, that had to mean something, surely.

Ed: Just finished a job. Am close to Harrison….

Jack was already scrambling out of bed, messaging one-handed while he emptied his drawers for a clean shirt.

Jack: Send me your location. I’m in desperate need of caffeine. Bet you could use some too.

Ed sent a grinning dog and his location. Eighteen minutes later, Jack walked into the local Starbucks. He scanned the almost empty store and caught Ed’s broad shoulders at the counter.

Jack strode over and clapped the guy on the shoulder, giving it a lingering squeeze. “I have an eerie sense of déjà vu.”

Ed’s warm shoulder shook as he chuckled. “I haven’t mowed you down yet.”

“No, no, that you haven’t.” Their gazes snagged, and Ed definitely swallowed. Probably too early—in the day and their friendship—to tease.

Jack rocked back on his heels, dug his wallet out of his pocket, and ordered.

When they both had their drinks, they sank into armchairs in the corner of the room.

Ed’s gaze kept dipping to his chest, and Jack’s lips tipped up behind his mocha. “How was your morning job?”

“I was extremely motivated to get the job done quickly.”

Jack’s grin widened, and an ill-timed sip ended up rolling down his chin. He swiped it off. “Do you often have jobs close to Harrison?”

“Not as much as I’d like.” Ed rubbed his palm over the arm of the chair. “I mean, a lot of the time I have to drive out farther.”

“Well, any time you’re nearby….” He raised his cup.

Ed glanced at his chest again. “I like the look.”

Jack followed the sweep of Ed’s hand and—fuck. His shirt was inside out. “Right. Of course.”

Ed leaned forward in his seat, amusement lighting his eyes as he took in the rest of him. Shivers skittered through Jack, and he held his breath. “I totally woke you, didn’t I?”

The deep laugh Ed gave made it all worth it. “So you’re a high-ranking anchor in your fraternity?”

Jack snorted at the muff. From the way Ed stared at him, it was hard to tell if he’d done it on purpose or really had the term mixed up.

“We prefer to pronounce it ‘archon,’ but either way, I’m one of the fraternity leaders, yes.”

“Which? Being in the fraternity or being an officer?”

Of course he’d want Jack to answer both. “Yeah, for the most part. I mean, there are a couple guys I wish weren’t my brothers, but that’s how it is.”

“How’d you pick that fraternity?”

“There wasn’t really any other option.”

Ed’s brow furrowed. “I thought Harrison had a lot of fraternities.”

“No, not like that.” Jack waved his hand and shook his head. “My dad, both of them were in Pi Kappa Phi. Marcus and I grew up hearing all the stories about their days in the house.”

“Yeah, they met when they were freshmen and were friends until… well… until my parents died.” He thought he’d been ready to deal with the issue, but confronted with it, he froze.

Ed scooted up on his chair, leaning forward. “You okay, Jack?”

Jack rubbed the ring at the chain around his neck and drew in a calming breath. “Yeah. Yeah.”

Ed seemed to realize Jack needed a change in conversation, because he abruptly started telling Jack how his sister had woken him last night screaming murder. She’d gone to the bathroom at night, and when she walked back to her room, someone was in there, rustling the sheets.

Ed had launched into her room with a bat only to be confronted with their cat. The first time the cat decided not to be shy. In the middle of the night, rolling around Becky’s bed. They laughed so hard, they needed to make a cup of hot milk to settle down again.

“Sounds like you’re a good guy to have around… wayward cats.” And panicking… friends.

Ed sipped his coffee. “What about you?”

“I like to think I’m a good guy to have around too.”

Jack clasped his cup, muscles rigid. Here it was. “Yeah?”

Air blew into the café along with a group of rowdy hipster students toting stainless steel cups. Jack shuffled forward on the cushion to hear Ed better, but Ed’s gaze strayed toward group and his mouth flattened.

Jack cursed the interruption, but it was clear the moment had passed.

“What are your plans the rest of the day?” Ed asked instead.

Ed laughed, and Jack soaked it up.

“Class, bantering with Brittany—she’s awesome—frat meeting about the spring formal, messing around with the guys. Might squeeze some actual study in there.” A lot of study, actually.

“Messing around with the guys?”

That piqued your interest, did it? Jack smirked. “Play a bit of ball if the weather holds. Get out the PlayStation and hit the video games if it doesn’t.”

Jack groaned. “The bane of my life.”

Andy Gallo prefers mountains over the beach, coffee over tea, and regardless if you shake it or stir it, he isn’t drinking a martini. He remembers his “good old days” as filled with mullets, disco music, too-short shorts, and too-high socks. Thanks to good shredders and a lack of social media, there is no proof he ever descended into any of those evils.

Andy does not write about personal experiences and no living or deceased ex-boyfriends appear on the pages of his stories. He might subconsciously infuse his characters with some of their less noble qualities, but that is entirely coincidental even if their names are the same. And while Andy leaves the hard sci-fi/fantasy for his alter ego, Andrew, in his mind a touch of the supernatural never derailed a good relationship.

Married and living his own happy every after, Andy helps others find their happy endings in the pages of his stories. He and his husband of more than twenty years spend their days raising their daughter and rubbing elbows with other parents. Embracing his status as the gay dad, Andy sometimes has to remind others that one does want a hint of color even when chasing after their child. 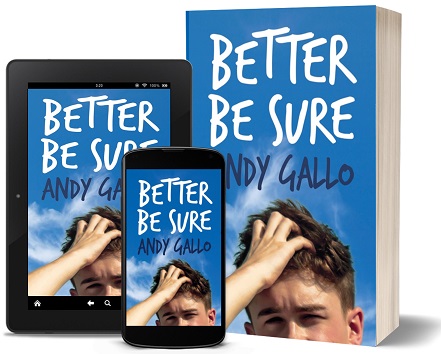 Win an eBook copy of (Un)Masked or one copy of Leo Loves Aries, by Anyta Sunday