Hi guys! We have Kim Dias popping in today with her upcoming release Breakfast at Midnight, we have a brilliant guest post from Kim and a great excerpt so check out the post and enjoy! <3 ~Pixie~ 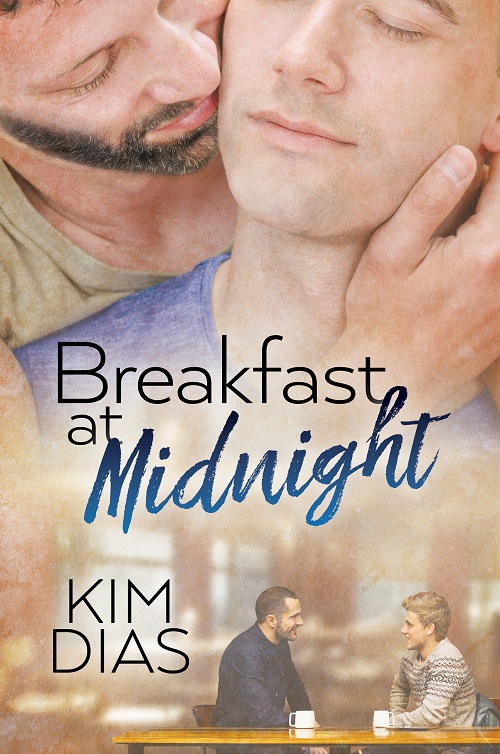 Hope can be found in unexpected places.

Lonely, still struggling with his divorce, and suffering from writer’s block, successful thriller author Fred spends much more time in an all-night Denny’s than is healthy for any man. It’s the last place he thought he’d meet someone like Callum, who has literally run away from the internationally famous boy band Leos.

Despite their age difference, the two become friends, and their long nights of soul-searching might help them find the courage to face their problems: Fred’s deteriorating relationship with his daughter and Callum’s career issues. It’s easy for their lives to tangle together, and each might provide the other the means to move beyond the past—even if it’s not a journey they can take together.

Breakfast at Midnight started life as a short story written for a Dreamspinner Press anthology. The theme of the anthology was to have a character who was an in-universe celebrity, and from that prompt, Callum was born. I didn’t know much about him from the start. I knew he was young, I knew he had long hair, and I knew he was a member of a boy band. I knew even less about Fred, which was slightly worrying since he was my main character.

The story, then titled “Running Away”, was turned down from the anthology (with very good reason, to be honest). But my rejection letter from the Dreamspinner Press editors ended with a lovely note: “[The story] read wonderfully. We encourage you to consider expanding it to meet the minimum 15k and submitting it to regular submissions if you have the time in your writing schedule.”

I will never ever stop being grateful for that. The editors could have just turned me down. They could have said, “No” and nothing more. And if that had been the case, the manuscript would have been lost in the depths of my computer and probably never opened again (unless I decided to be incredibly masochistic and revisit my old shame).

Instead, I ignored it for two months. Then I took a deep breath, reopened the document, and started working again.

Writers are used to rejection letters. We’re very aware of every single no we’ve received, the anthologies we aren’t in, the competitions we haven’t won. Being a writer is hard.

Some days it’s hard to remember why I’m a writer. Then I’m granted one of those moments. You know the ones. The moments when someone looks at your work and they say, “Yes. Yes, there is something here. Yes, there is something worth reading. Yes, this was worth writing about.” It’s what keeps us going. It’s why we put up with all the insecurities and neuroses and fragilities that come with being artists.

I create because I have to create. But the drive to create is powered by the belief that I have something worth creating. It’s hard to fuel that by yourself. So if you have a writer in your life, give them a little bit of encouragement—it’s what keeps us going. FRED NOTICED the kid right away. Of course he did. It was 2:00 a.m. on a Tuesday night in a roadside Denny’s; it wasn’t exactly teeming with people.

The kid stood pigeon-toed, shuffling on his feet as he waited at the hostess station until Leslie called, “Sit wherever you want, hon. I’ll be with you in a sec.” He was wearing those—what did Amira call them?—skinny jeans and a hoodie. He kept his hands tucked in the hoodie’s front pocket as he slipped past Fred’s table and into a corner booth.

For lack of anything better to do, Fred watched him. Leslie handed the kid a menu and, without looking at it, he asked for a coffee. She nodded—“Sure thing, honey”—and left him to it. The second he took his hands out of his pocket, Fred could see why he had kept them in there. They were jittery, agitated. They flipped the menu’s pages back and forth, bent them, picked at the corner of the paper tent that advertised the specials.

Fred used to do this all the time, sit and watch people, quiet and unobtrusive. Sometimes he scribbled the traits of the more interesting ones in a notebook: bounced in his chair whenever he spoke… smelled like bubblegum when she walked past… added five sugars to her tea….

James used to laugh about it, used to tease, “I married such an artist.” That was when they still laughed together, when they could still tease without the words being tight around their edges.

Fred pushed the thoughts out of his head. It was too easy to get maudlin on these late nights when he couldn’t sleep, and that made it too easy to “forget” to take his meds.

Fred pulled himself out of his thoughts when Leslie delivered the coffee to the kid’s table. The kid poured in two sachets of sugar, two creams, and then proceeded to rip the sugar packets into smaller and smaller pieces while he perused the menu. Reading? Or zoning out? His gaze looked too vague to be focused.

Fred looked up into Leslie’s gaze. “Yeah,” he said, “please,” and pushed his mug to the edge of the table.

“Your food’ll be right out,” she said as she poured. “You want jam?” She asked that every night he was here, even though his answer was always—

She nodded and walked away, leaving him to his thoughts. His thoughts and his book, which he hadn’t opened the last two nights he’d been here.

He looked at it. Flipped to his bookmarked page—page 36—and read a line. Two lines.

The kid raised his head at the noise, which had been louder than Fred intended. Their gazes met, and Fred’s breath caught at the deep green eyes that stared back at him. A smile that seemed more automatic than genuine flitted across the kid’s lips, a learned and practiced response. Fred blinked, too startled for a second to respond—people rarely made eye contact with each other here, and when they did, they never smiled. By the time he’d told himself to smile, idiot, that’s what normal people do, the kid had looked away, his head ducked over his coffee cup.

Gut clenching with embarrassment, Fred tore his gaze away. He wanted to keep watching. It wasn’t just the smiling. Nothing about the kid fit in here. The usual crowd was made up of truckers, insomniacs reading books with red eyes, and Fred, who fit in more with the latter group than the former. The kid was too… too pretty to fit in, with his messy brown hair and beautiful eyes.

Why, why had it taken him so long to smile? He guessed that’s what happened to your social skills when most of your life took place in a Denny’s after midnight. It was only when Leslie came by with his plate that Fred braved another glance at the kid.

He was gone. The only traces left behind were a coffee cup, the confetti of two ripped sugar packets, and a ten-dollar bill.

Kim Dias has been writing for years, but has been making up stories for what feels like forever. She writes love stories, preferably with a side of hot sex; Literary Review’s Bad Sex in Fiction Awards constantly inspire her to do better.

When not focused on her studies at the University of Victoria, Kim spends her time working on her novel, which she swears will one day be finished. She loves dogs, reading in front of fireplaces, and days spent in the sunshine. She believes whole-heartedly that stories can change the world.

You can find her online at http://kimdias.tumblr.com/.

One thought on “Breakfast at Midnight by Kim Dias Guest Post & Excerpt!”