Hi guys, we have Michaela Grey popping in today with her upcoming release Broken Rules, Michaela is sharing an exclusive excerpt with us so check out the post and enjoy! ❤ ~Pixie~ 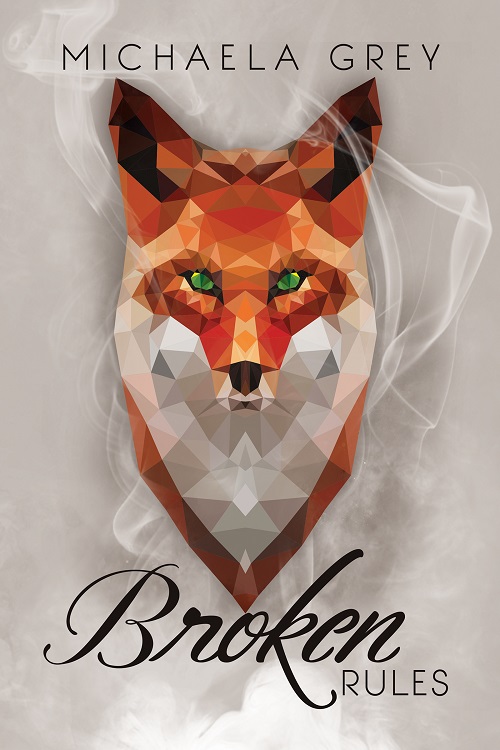 Sanyam Desai is a Dom, a master of his craft. He knows exactly how to make a person beg, and he does it for a living, but he has no idea how to be in love.

Sterling Reynard is in desperate need of manners and someone who cares enough to take him in hand, but he knows he’ll never be loved.

When Sterling’s world crumbles around him, he turns to the one person who’s never asked for anything from him but his trust. But their relationship is built on quicksand, and one careless word will bring the whole thing down.

Sterling woke up and stomped to the bathroom in a foul mood. He stepped on the mess of aftershave he’d forgotten to clean up and cut his foot, swearing violently. He hopped on his other foot as he rocketed from angry to furious in a heartbeat.

He took a scalding hot shower, scrubbing until his skin was bright red and felt like it was about to peel off as tears prickled his eyelids. He felt filthy, more useless and pathetic than usual, and he couldn’t get clean.

The red swirled away down the drain from the cut on his foot, and he pressed his forehead against the glass of the shower stall as the hot water pounded his shoulders.

Finally he gave up and stepped out, avoiding the glass this time, and dried off, flinching as the towel scraped against the bruises from the night before.

Digging out his softest pair of pajamas, he pulled them on and hobbled into the kitchen, then swore yet again when he remembered that it was Astrid’s day off and there was no breakfast waiting for him.

On the plus side, there were no jam-sticky hobgoblins sitting at his dining room table, either, so maybe it wasn’t all bad.

Sterling rooted around in his fridge half-heartedly, but when a cursory search failed to turn up anything besides the casseroles Astrid made ahead of time to cook for him, he gave up and limped back to his room.

He flopped onto the bed facedown and buried his face in a pillow. The day was going to be a total wash, he could already tell. Better for everyone—especially him—if he just stayed in bed all day.

When the doorbell rang a few minutes later, Sterling jerked his head up with a snarl, ready to do battle.

“Fuck off!” he shouted in the direction of the door.

The bell somehow sounded even more insistent this time.

Sterling rolled to his feet. He landed on the open wound and snarled under his breath as he limped for the door, prepared to eviscerate whoever had the nerve to talk to him today.

He was entirely unprepared to be faced with Sanyam, wearing a gray, cabled sweater and carrying two cups of coffee.

“What the fuck are you doing here?” Sterling sputtered.

“Your doorman let me up,” Sanyam said, holding out one of the cups and stepping around him into the apartment as Sterling accepted it, dumb with shock.

Sterling closed the door and turned to face him. “Why are you here, though?”

Sanyam was in the middle of his living room, looking around critically. The morning sun haloed his curly hair, and he smiled, white teeth flashing against the black of his beard. Sterling was suddenly acutely aware of what a wreck he himself was, and he set the coffee on the counter and crossed his arms over his bare stomach.

“You left so quickly last night that I didn’t get a chance to warn you about the possibility of sub drops,” Sanyam was saying, unaware of Sterling’s internal dilemma. He turned to admire the view of the city and sighed appreciatively.

Sanyam arched an eyebrow. “Are you feeling irritable? Weepy? Moody?” His eyes lit with a smile. “More than usual, I mean, because I already know what a stellar personality you have.”

“Fuck off,” Sterling snapped. “I’m fine. Now go away.” He stomped for the bedroom as Sanyam took a startled breath behind him.

“I stepped on something; it’s not a big deal,” Sterling said over his shoulder. “The door’s over there. See yourself out.”

Sanyam followed him into the bedroom instead as Sterling fell onto the bed again. “Let me see.” He gripped Sterling’s ankle in one big hand, stopping him easily when Sterling tried to jerk away. “Be still,” he said, and Sterling growled but stopped fighting.

Instead he lay on his stomach and sulked as Sanyam gently wiped the skin around the cut with a tissue from the box on the nightstand.

“Is there a first aid kit in your bathroom?” Sanyam asked.

Sterling shrugged, face still buried in the pillow. “Might be. I don’t know.”

“Where would I go?” Sterling muttered, not expecting an answer.

Sanyam’s footsteps disappeared into the bathroom, followed by rustling as he rooted through the cupboards.

“You’re in luck,” Sanyam called. “There’s a very nice one. What happened in here, by the way?”

“Tragic aftershave suicide,” Sterling mumbled as Sanyam came back in and knelt beside the bed again. “It couldn’t take the pressures that a heteronormative society put on it any longer.”

Sanyam laughed, sounding startled. “I had no idea you had an actual sense of humor,” he said as he gently cleaned the cut.

Sterling scowled into the pillow. “I don’t. Why are you still here?” Michaela Grey lives and writes in the Texas hill country. Her hobbies include knitting, analyzing her favorite TV shows, and experiencing intense feelings over fictional characters. Michaela Grey told stories to put herself to sleep since she was old enough to hold a conversation in her head. When she learned to write, she began putting those stories down on paper. She and her family reside in the Texas hill country with their cats, and she is perpetually on the hunt for peaceful writing time, which her children make difficult to find. When she’s not writing, she’s watching hockey videos or avoiding responsibilities on Twitter, where she shamelessly ogles pretty people and tries to keep her cat off the keyboard.