Hi guys, we have Frank W. Butterfield popping in today with his latest release Chasing Eddie, we have a great excerpt and a brilliant giveaway, so check out the post and enter the giveaway! ❤ ~Pixie~ 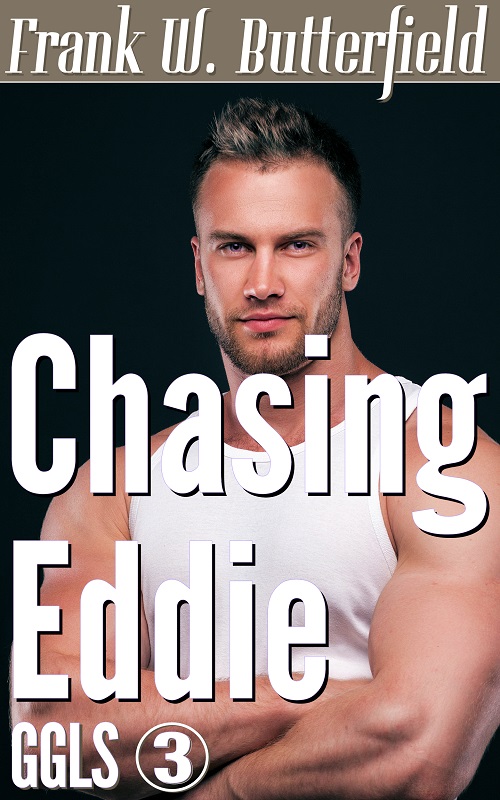 Eddie Smith is a chubby bear of a guy who lives in Daytona Beach and doesn’t work much anymore but isn’t retired.

Whit Hall has just retired as a tight end for an NFL expansion team and lives in San Antonio.

At 52, Eddie feels at home with himself and has learned how to roll with life. He’s happy enough where he is and doesn’t expect much to happen anytime soon.

At 35, Whit is ready for a life that put less of a strain on his body. He’s banked plenty of dough but doesn’t know what to do next.

About to sit down to his favorite take-out lasagna, Eddie gets a call from a friend who wants to hire him to help Whit figure out what’s next in his life.

Eddie is a kinda, sorta life coach and might be able to help but seriously doubts it.

Reluctantly, he climbs aboard his friend’s private jet and flies to San Antonio. Once he arrives, he ends up getting a whole lot more than he bargained for. Whit Hall is aggressive, he’s angry, and he’s under a lot of pressure.

Now that he’s retired, Whit is looking for the next thing.

He’s set, with plenty of bank. And he’s doing what he can to deal with his parents, who are all up in his business. A lot.

Then, one Wednesday morning, he opens his front door. Before he knows it, Whit is chasing Eddie Smith out of his house, down the street, and even further.

It’s a good thing Whit is (kinda) in shape for this new type of chase!

Neither man wants to go far…

But unexpected changes are chasing them both…

Wherever they end up going, and whatever ends up happening, this will be the beginning of something new and wonderful for them both.

This story is the beginning of a series of contemporary romantic adventures. It ends with the start of one of those, so there are some loose plot points but no cliff-hanger.

Golden Gate Love Stories are all about the lives and loves of men who fall in love with each other and find the one they were waiting for.

Set in the same universe as the Nick Williams Mystery Series and the Daytona Beach Book Series, these love stories focus on the men who come together, find true love, and really do live happily ever after. He looked at me for a long moment. His violet eyes got more focused and I wondered what was going on in that head of his with its tufted hair on top and strange gray streaks.

I could feel my attraction for him suddenly come front and center. Like always happened, my knees got a little weak and my mouth got dry.

I held his gaze for as long as I could, wondering what was really going on. I knew what I wanted to happen. I wanted something… Like a kiss or more. I was pretty sure he’d been watching me as if he was attracted to me. His eyes always went to my belly, which was a tell-tale sign. Right then, however, his violet eyes were drilling into mine.

As always, I started doubting myself. Maybe I was mis-reading him entirely. Maybe he was just a friendly straight guy. As we looked at each other, all of those thoughts, and more, ran through my head.

Of course, I’d been hired by Bob to do a job and kissing Whit wasn’t in the job description. And it wasn’t ethical for me to kiss him. Not that I adhered to some sort of written code of ethics. I just didn’t think it was respectful of Whit as a client, even though he really wasn’t my client, but that was splitting hairs.

Nevertheless, I was tempted to put my left hand around his waist, but I was afraid how he would react. It was hard to be around a big scaredy-cat who might bite, and hard, at any moment.

So, with all that going through my mind, I stood perfectly still and examined the violet in his eyes, something that was remarkable to look at.

And then, suddenly, it was over.

He turned and looked at the river. After another few seconds, he leaned against one of the trees and crossed his arms. “Knowing this is here is enough to get me to stay.”

“Oh?” I asked, wishing I had some water to drink.

He cleared his throat. “Yeah. I talked to my business manager about putting the house up for sale. He thinks I could make a profit on it, considering that I owned it.”

I looked over at the river, not wanting to show him what I thought of that idea. But, somehow, he knew I had an opinion.

“I guess I would never think of paying a premium on a house because a football player had lived there. Not one like that one. You’ve got a historical marker, after all.”

He didn’t say anything. I looked over at him. He was staring out at the river.

“What!” I couldn’t help myself.

He looked at me, frowning. Shrugging, he said, “Well, I don’t give a shit about how old it is or who lived in it.”

He leaned forward, aggressively. “I didn’t buy it. My mother did.”

He took a deep breath and then said, “Sorry. I promised Ossler I wouldn’t do that again.”

I knew what he meant, but I wanted to hear him say it. “Do what?”

“Get in your face.” He did look contrite which, on him, was really cute.

He looked down at me and smiled a little. “No sweat, Coach.”

I grinned and shook my head.

He laughed and then patted his belly. “OK. Now, I’m hungry.” Their Own Hidden Island (book 02)

Although Frank worships San Francisco, he lives at the beach on another coast. Born on a windy day in November of 1966, he was elected President of his high school Spanish Club in the spring of 1983. After moving across these United States like a rapid-fire pinball, he now makes his home in a hurricane-proof motel, built in 1947, with superior water pressure. While he hasn’t met any dolphins personally, that invitation is always open.