Hi guys! We have M.D. Neu stopping by today with his new release Conviction, we have a great excerpt and a fantastic $10 NineStar GC giveaway so check out the post and enter the giveaway! ❤ ~Pixie~ 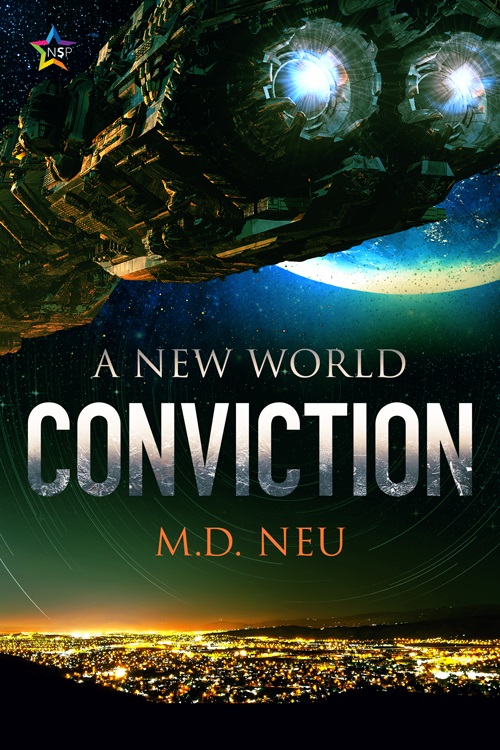 A little blue world, the third planet from the sun. It’s home to 7 billion people with all manner of faiths, beliefs and customs, divided by bigotry and misunderstanding, who will soon be told they are not alone in the universe. Anyone watching from the outside would pass by this fractured and tumultuous world, unless they had no other choice.

Todd Landon is one of these people, living and working in a section of the world called the United States of America. His life is similar to those around him: home, family, work, friends and a husband.

After the attack on San Jose, Todd is appointed to Special Envoy for Terran Affairs by the nentraee, a position many world leaders question. Undeterred Todd wants to build bridges between both people. However, this new position brings with it a new set of problems that not only he, but his new allies Mi’ko and Mirtoff must overcome. Will the humans and nentraee learn to work together despite mistrust and threats of more attacks by a new global terrorist group, or will the terrorists win? Will this bring an end to an already shaky alliance between nentraee and humans?

“I believe this should be adequate.” Mi’ko checked his datapad to ensure all the proper requisitions had been finalized. He glanced around the room again with a pleased smile.

They were here to inspect the quarters he had selected for Todd in the secured area of the speaker’s ship. He could have left it up to Vi-Narm or one of his other aides, but this was important and he needed to handle these details personally. Todd was important, and he wanted to make sure everything was perfect. Plus, it was an opportunity to spend more time with Mi’cin.

“Mister Todd Landon was adamant about staying in his own home and commuting, but it’s not practical.” Mi’ko ran a hand over the desk, then checked his fingers for dust. “And with the rise in protest against us across the planet, it’s not safe. Even though his government insists it is.”

“If you say so,” Mi’cin said. “He didn’t strike me as very logical after our brief meeting.” He went to one of the windows and opened it. “It would be nice to have quarters like this for myself. Does he need all this space? He’s one male.” He inhaled deeply and viewed the park below. “It smells like home. But it’s a replica, not the real place.” His nose crinkled.

“Mi’cin, don’t sulk. Our living situation isn’t that bad, and you are not a child.” Mi’ko put a hand on his son’s arm and squeezed. “I know you hurt. We all ache for our home, but these ships are our home, for now. It’s a pain we all share. By working with the humans, especially Todd, that pain and the loss of our home will lessen.”

Mi’cin’s expression fell. “Assuming the humans will work with us.”

“Please be supportive.” Mi’ko frowned. “I understand you have your misgivings, but please.” He inhaled, smelling the damp trees. “And since when have you not enjoyed the ship’s gardens?” He looked out to the woodland where several tall trees, paths, and waterways ran in countless directions.

The grounds were replicas of some of the famous parks on Benzee and her satellites. The ship’s builders gave as much space as feasible to allow people the chance to enjoy the open space. The artificial light that mimicked the day-night cycle of Benzee had gradually been adjusted to the length of Earth’s day.

“He does, indeed, have a better view than us, but that’s all right.” Mi’ko grinned and thought.

This new position for Mi’cin will help focus him. Give him a chance to interact with the humans and learn about them.

“A view of space would have been equally nice,” Mi’cin said, “but I doubt he’d be used to such a thing.” He turned back to the window. “Such a waste.”

“I assure you it’s not a waste.” Mi’ko ran a hand over the soft fabric of the chair. “Considering the nature of this position. Plus, I thought a view of nature and all the fresh scents would make him feel more at home. It will give him a sense of what Mentra Park was like.”

“What?” Mi’ko questioned. “That was one of your favorite parks on Mentra. You made me take you there whenever we went to visit my parents. You loved the views of Benzee.”

“I’d like to ask you to assist Mister Todd Landon to help him acclimate,” Mi’ko said. “It’s going to be hard for him at first. Even though he’s been studying our language and culture—”

Mi’cin’s sigh muted his father. “Of course. I’ll do my best. You have my word. Besides, isn’t that what your aide is supposed to do?”

“True, but this is the first time I’ve had an aide who’s my son.”

“Well, Vi-Narm can’t do it all, and your other aides are busy,” Mi’cin said. “I can use the experience, as you and Mother both keep telling me.”

“I can think of no one better to support me.” Mi’ko focused on his son. “You know, you’re both very quizzical, so you will be good for each other. I hope you can become friends.” He reached out and gently touched Mi’cin on the cheek.

A soft chirp came from the door. It opened to reveal Vi-Narm. Her tightly braided hair had a few wisps out of place; her breathing was heavy.

“Vice speaker, there is a problem with the Envoy position. General Gahumed, with the support of General Fanion, is calling for a special session in the council chamber.”

“What now?” The muscles around Mi’ko’s eyes twitched and the tips of his ears started to warm. It had been like this for several weeks. These continued issues with his own people were taking far too much of his time..