Hi guys, we have A.E. Via visiting today with her new audio release Embracing His Syn, we have a brilliant giveaway where you can win your own audiobook of Nothing Special, so check out the post and then enter the giveaway!  ❤ ~Pixie~ 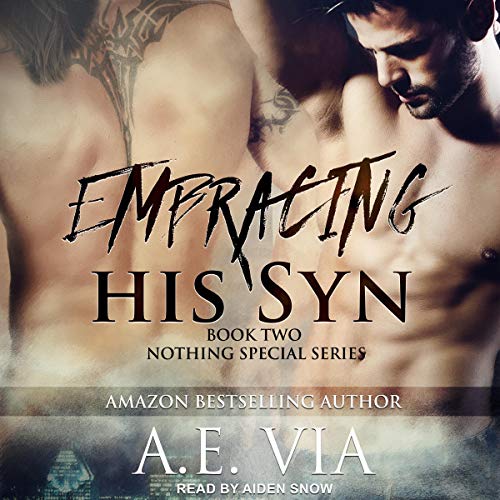 (Nothing Special 02)
by
Narrator: Aiden Snow

Sergeant Corbin “Syn” Sydney had dedicated his life to becoming the best detective. So when he heard there was an opening on the notorious Atlanta Narcotics Task Force, he jumped at the chance. But, what he wasn’t ready for was realizing just how lonely he’d made himself, when he observed the loving and dedicated relationship between the two men he served under: Lieutenant Cashel “God” Godfrey and Lieutenant Leonidis Day.

Syn prepared himself to accept his lonely fate until he walked into a small pub and met the long-haired, tattooed bartender, Furious Barkley. Before Syn can even understand why, he’s overcome with feelings he barely recognizes: passion, yearning, craving. And if the dark, lustful gazes are anything to go by, Furious might be feeling the same things for him.

Just two thing needs to happen before Syn and Furi can give each other what’s been missing from their lives for so long…Syn needs to find the evidence that proves Furi’s innocence of murder, as well as protect him from a past that refuses to let go. Win an Audio Book of Nothing Special!