Hi guys, we have Scotty Cade popping in today with his upcoming release From Jack To A King, we have a brilliant guest post from Scotty, a great excerpt and a fantastic, so check out the post and leave a comment to enter the giveaway! ❤ ~Pixie~ 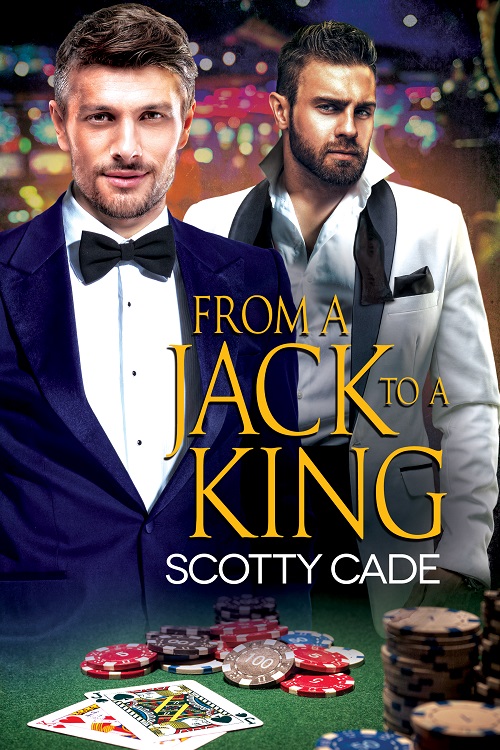 From Jack To A King

New York Times best-selling mystery writer Bay Whitman leads the life of a celebrity—at least on the surface. In public he’s self-assured and in control. Women hang on his every word, while men envy his confidence and swagger. But in reality, Bay is a loner. He’s shy and introverted, and his life consists of sitting in a dimly lit room writing his famous Jack Robbins mystery novels. His one vice—gambling. Winning an escort in a poker game will change Bay’s life in ways he never imagined.

Matthew “King” Slater is one of the hottest tickets in gay porn. He spends his days in front of the camera and his nights as a highly paid escort to the rich and famous. Deep down, he craves romance and a real connection, but his past makes it hard to separate the needs of his body from those of his heart. For now, it’s easier to think of sex as just a job. But while doing a shoot in Vegas, King is hired for a tryst at a famous hotel and casino, and his handsome client might blur the line between work and play.

Firstly, I’d like to thank Miss Pixie and everyone over at MM Good Book Reviews for having me. You guys have always been so supportive and I truly appreciate it.

With that said, I can’t believe its almost July. This is the first summer Kell and I have had off since we bought our Inn on Martha’s Vineyard over fourteen years ago. And by that statement you may have picked up on the fact that we finally got the nerve to sell the business and move on to our next life, whatever that will be. And saying we are looking forward to some much needed down time this summer in an understatement.

Anyway, I’m here today to tell you about my latest release “From a Jack to a King.” I started this novel in January of 2017 and because things were so hectic surrounding the sale of our business, it took me through October to finish it and another couple of months to get through the editing process, but thankfully we’re finally here.

Like many of my novels, “From a Jack to a King” was inspired by a song. In this case, a song of the same name sung by Ned Miller and released back in 1957 with very limited success. But five years later Ned convinced his record label to rerelease the song and success came in the form of a number two on Billboards Hot Country Songs and a top ten position on domestic and international crossover charts as well. It was also covered by Elvis Presley and Jerry Lee Lewis with little success, but in 1988 Ricky Van Shelton released his version and it sailed all the way to number one on the country charts.

For me the draw to the song had nothing to do with the number of covers or Ned Miller. I wasn’t even born when it was first released, but this very song happened to be one of my grandmother’s favorites. When I rediscovered it many years later, I knew the words instantly and memories of my grandmother singing it to me when I was little came flooding back. The song has been on my playlist ever since and hearing it always makes me feel closer to her.

One day on my run the songs cycled through my playlist and like a tornado the story just spun into shape very quickly. I had to stop over ten times and type notes into my phone before I forgot them and needless to say it wasn’t a good run, but I think it produced a great story. At least I hope you think so.

Below you can read a little excerpt, but before you do, I’d like to know your opinion on music and how it affects your life. Does a certain song remind you of another time or another person? A first kiss, a first date, losing your virginity, etc.? On my end, music has always had an impact on me. I love to sing and dance, neither of which I am very good at, but music can change my mood in the drop of a hat. For instance, I can be cooking a regular old dinner on any given night, but I pop on something I can sing along to and suddenly dinner is a party. Most of the songs on my playlist are there because of some special time, a loved one or a person who has had some sort of impact on my life and each time I hear those songs it brings that person or time back to me. If you post, you’ll automatically be entered into a drawing for an e-book of “From a Jack to a King.”

Thanks for spending the time with me and I wish you and yours a wonderful and relaxed summer.

Now here’s your excerpt and lot of other stuff about where to find me and my books, especially “From a Jack to a King.” Bay Whitman stood in the foyer of his suite at the MGM Grand Las Vegas Hotel & Casino and gazed into the gold-framed mirror. With shaky hands, he adjusted his bow tie one last time and slipped on his perfectly tailored midnight-blue Armani tuxedo jacket. He pulled his french cuffs down so exactly one-half inch of white was showing at the end of each of his dark sleeves, exposing just a hint of his black-onyx-and-diamond-encrusted cufflinks.

Adrenaline surged through his veins, same as before every big poker game, and he loved it. Gambling was like cocaine to him, and right now the as fast, steady, and powerful as the water flowed over Niagara Falls. In the early years, when he didn’t have a lot of disposable income, the quarter slots were what gave him goose bumps, but even though the game had changed and the stakes are much higher, the thrill was equally intense. Gambling was the only thing that made him feel alive. And like an addict, he desperately craved the high he got when he stared down his opponent and bluffed his way to a winning hand.

Bay stepped back from the mirror, took a nervous breath, held it, and closed his eyes. He focused on the backs of his eyelids until his lungs were about to burst. He exhaled, hissing through slightly parted lips. A mantra, so to speak, to help him navigate the life he’d unexpectedly created for himself. Can’t bluff with a sweaty brow and shaky hands, my boy. You need to be steady and sure. Always!

When Bay opened his eyes, he was finally beginning to see the signs of his calm, confident, and collected alter ego. “Not too shabby for a nerd.”

He chuckled. Nerd? That was only partly true. Yes, he was undoubtedly a nerd, but he was also a New York Times best-selling mystery writer with a large backlist of successful crime novels under his belt.

Surrounding his latest release, Bay had been scheduled for several personal appearances and book signings in Las Vegas, so he’d decided to jump on a plane a day early to treat himself to a little fun in his favorite stomping ground.

This little excursion wasn’t without merit. It was a pat on the back for not only making, but beating, a very important deadline. Yesterday afternoon, one day ahead of schedule, he’d typed The End on the second of a three-book deal with his publisher featuring his beloved main character—playboy private eye Jack Robbins. He’d learned quickly how difficult it was to manage the demands of a promotional tour while his head was stuck in a work in progress, so he’d always done his best to set his deadline a little before a release date, which afforded him a clear head for the influx of press attention that accompanied each new book. The three novels were already contracted to be made into a trilogy of movies, and the studio was touting Jack Robbins as a cross between Jason Bourne and the American version of James Bond. No pressure there!

A shiver ran up Bay’s spine as he contemplated what was at stake. The big screen. Jack Robbins is going to hit the big screen. A medium totally unfamiliar to Bay, one where he wouldn’t be able to hide. As soon as the you’re not good enoughs tried to creep into his consciousness, he pushed them, along with all the other feelings of inadequacy, from his mind and focused his attention elsewhere. In particular, on the exceptionally high-stakes game he was about to partake in. One with some pretty big hitters. Bay knew he needed to be on his game.

He looked in the mirror one last time and focused on his eyes. He sighed with relief when he saw no signs of the very successful but equally nerdy writer who was plagued by almost crippling insecurities and self-doubt every day of his life.

In his mind, all he saw was Jack Robbins. The personality his adoring fans were accustomed to and his opponents at the poker table were intimidated by. I’m ready.

He looked at his watch. Four forty-five. Better get going. The game starts at five, and I don’t wanna be late.

Scotty Cade left Corporate America and twenty-five years of Marketing and Public Relations behind to buy an Inn & Restaurant on the island of Martha’s Vineyard with his partner of over twenty years. He started writing stories as soon as he could read, but just eight years ago for publication.  With the Inn and restaurant now sold, you can find him in Greenville South Carolina where he and his husband are restoring a hundred year old house or in Charleston South Carolina on their boat simply hanging out.  Being from the south and a lover of commitment and fidelity, all of his characters find their way to long healthy relationships, however long it takes them to get there.  He believes that in the end, the boy should always get the boy.

Here’s where you can find me:

Win an ecopy of From a Jack to a King!

(Just leave a comment letting Scotty know the answer to his question and you’ll automatically be entered into the drawing.)

I’d like to know your opinion on music and how it affects your life. Does a certain song remind you of another time or another person? A first kiss, a first date, losing your virginity, etc.?

(Ends when Scotty picks a winner!)

3 thoughts on “From a Jack to a King by Scotty Cade Guest Post, Excerpt & Giveaway!”