Hi guys! We have Layla Dorine stopping by today with her new release Gypsy’s Rogue, we have a great excerpt so check out the post and enjoy! ❤ ~Pixie~ 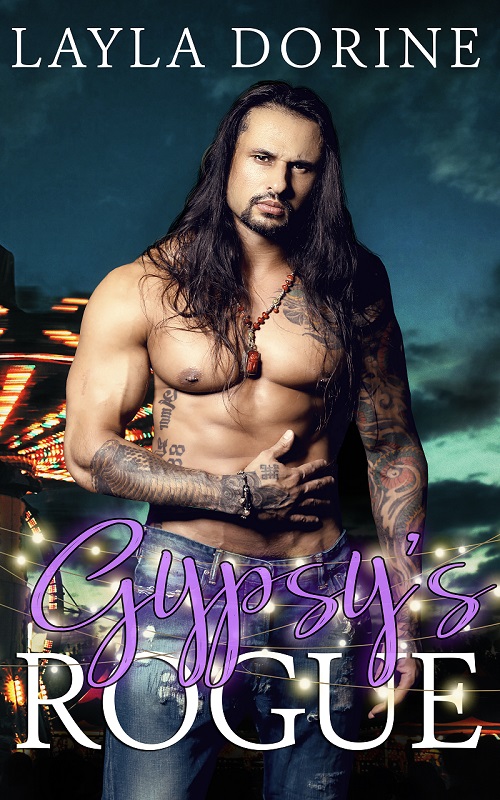 Growing up with a strictly religious father in a house with little joy, or love, left Grady Stoltz eager to get out. At the first opportunity that presented itself, they left home with a young man who swept them off their feet, used their preferred pronouns, and accepted that they were gender fluid and wished to shed the name Grady and all of the constraints of their former life. Dubbed Gypsy, they never expected to return to that farm or the rural community they’d been raised in, but life took some unexpected turns, and they found themselves returning four years later. A little older, a little wiser, and the new owner of a house full of memories and regrets.

Cleaning the place up is only the first step towards deciding if they wish to sell it, or if they wish to stay and try and make a life for themselves in a place they’ve never felt as if they belonged. Haunted by the memories of the father who could never accept them, the mother they lost at a young age, and their own shortcomings and failures, they are in a very dark place when Rogue arrives.

Charismatic when performing in front of an audience, yet shy and vulnerable when faced with the prospect of being alone in a crowd, Rogue seeks shelter with Gypsy on their middle of nowhere farm, hoping for a new beginning and a chance to see if the tiny spark that had flared between them once before, can be kindled into a roaring flame.

Two battered souls, one tattered farmhouse, an old dog, a cranky chicken, several misspoken words, and one crazed ex-husband combine in an explosive combination of truth, lust, dreams, and vengeance. Will the force of it tear Gypsy and Rogue apart, or will it leave them closer than they ever dared to hope? They rolled, blinking against the torrent, rainwater washing into their eyes, over their cheek, down their chin. Gypsy opened their mouth and it coated their tongue, nearly gagging as it hit the back of their throat, forcing them to swallow. It was cold and pure and they wondered, for a moment, if this was what the sky tasted like. A deep chuckle drew their eyes left, to a pair of black shitkickers standing out in stark contrast to the muddy green of their lawn.

Those boots were attached to long legs encased in wet denim, a sodden House of 1000 Corpses t-shirt stretched across a thickly muscled chest. Through their watery gaze they caught a glimpse of tattoos wrapped around a tanned pair of arms, their breath catching in their chest when they couldn’t fully make out the patterns of them.

Oh god, oh god it couldn’t be. They strained to see the man’s face, but the rain was blocking out his features. Gypsy began to panic, sucking in breath after breath, hyperventilating, as if the crying hadn’t been enough. They wished a sinkhole would swallow them up even while they were grateful the rain had washed away their tears. Gypsy was only vaguely aware of the man going to one knee beside them until he reached out. Recoiling sharply away from his touch, Gypsy went rolling through the mud. Their breathing picked up more, sucking in panicked gulps as they closed their eyes and squeezed their fists until mud squished through their fingers.

“Hey now. Gypsy. Hey, slow down your breathin’ for me. I didn’t mean ta scare you.”

He reached out again, and this time Gypsy was too tired to pull away. Exhausted, cold, with frayed emotions and their clothing stuck to their skin, they focused on the voice and tried not to fall off a cliff of blind panic.

“You can do better than that. Stop holding your breath, ya gotta breathe,” the voice insisted and they could feel their hand being placed against the center of a muscular chest so that the heartbeat thudded gently beneath their fingertips.

“Try and match your breathing to mine. Shit, I didn’t think you’d react like this to me coming out to see ya.”

They gasped, shuddered, batted weakly at the hand until they let go.

The man’s voice slowly sunk in and with it came the realization that it wasn’t their ex. They wanted to weep all over again for the mercy of that small act. Their breathing eased, and slowly, slowly they unclenched their fists from the grass. Rogue didn’t attempt to touch them again, just heaved a sigh and flopped onto his back beside Gypsy, shoved his rain soaked hair out of his eyes and let the deluge wash over him.

“No.” They didn’t look at him again, couldn’t. Gypsy was betting there would be pity in his eyes, that, or he’d be eyeing them up like he was measuring them for a padded room.

“So this is for fun then?” He wiggled a little, getting comfortable, settling in like he planned to be there awhile.

“Why are you here? How did you ever find me?”

He chuckled again, turned on his side, brushed the wet grass aside so he could see them more clearly.

“You told me about this place over a bottle of Grey Goose and Brit Coms.”

A bark of laughter erupted from their throat, harsh, rough, but it was a pleasant memory and damn, they needed those. “You laughed so hard you puked.”

“Yeah, that was your fault too. Never thought those things would be remotely amusing.”

“That doesn’t explain how you were able to find it.”

“We always keep records of the towns we’ve visited and the places we’ve set up shows. It wasn’t hard to backtrack through them and figure it out.”

“Why would you go through that much effort for me?”

“Why not? You didn’t call, you didn’t write, so when Isaac told me you’d headed back here, I figured I’d come find out what happened and make sure you were okay. You said you’d never return here, so I figured something drastic had to happen to change your mind.”

“Is that a good thing or a bad thing?”

“Then I’ll wait ‘til you decide if you want condolences or a celebration.”

“Sorry. I would though.”

“You didn’t even know my old man.”

“I was talking about mine.”

Layla Dorine lives among the sprawling prairies of Midwestern America, in a house with more cats than people. She loves hiking, fishing, swimming, martial arts, camping out, photography, cooking, and dabbling with several artistic mediums. In addition, she loves to travel and visit museums, historic, and haunted places, caves, monuments, national parks and quirk spots.

Layla got hooked on writing as a child, starting with poetry and then branching out, and she hasn’t stopped writing since. Hard times, troubled times, the lives of her characters are never easy, but then what life is? The story is in the struggle, the journey, the triumphs and the falls. She writes about artists, musicians, loners, drifters, dreamers, hippies, bikers, truckers, hunters and all the other folks that she’s met and fallen in love with over the years. Sometimes she writes urban romance and sometimes its aliens crash landing near a roadside bar. When she isn’t writing, or wandering somewhere outdoors, she can often be found curled up with a good book and a kitty on her lap.