Hi guys! We have Ryan Loveless popping in today with her upcoming release His Cursed Prince, we have a brilliant guest post and a great exclusive excerpt, so check out the post and enjoy!  ❤ ~Pixie~ 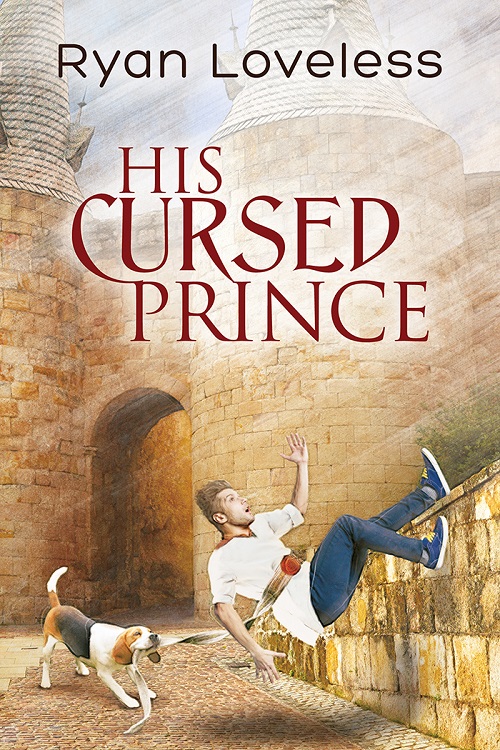 1, Given the choice between illegally scaling the royal castle’s walls to steal flowers for a client at his family’s dress shop or going on a date with a girl his brother set him up with (“He’s fertile, and he can sew!”), Tuck will scale the wall like a spider after a fly.

2, If, upon knocking himself unconscious when he falls off the wall, Tuck wakes up bruised, blindfolded, and inside the castle, where—based on the unearthly wails heard nightly—the prince no one has seen in ten years is probably a ghost, Tuck would still choose this over a date with a girl.

Three facts about Prince Frederick George Deor (Read and approved with great reluctance by Lord “Protocol is Protocol. Stop Being a Pain About It” Todd):

1, He brought a curse upon himself and now bears the skin of a snake.

2, He can’t take his eyes off the injured thief recovering in the castle.

3, Friendships born from lying and insisting the other person wears a blindfold can blossom into true love—which he needs to break the curse.

Thank you to MM Good Book Reviews for hosting me today. I’m excited to share my new release, His Cursed Prince, with you. It is an MM adaptation of Beauty and the Beast, so today I’m going to talk about how I went about tackling a classic. Obviously, this has been done so many times. You’re hearing the music in your head right now, aren’t you?

Well, if I could see this story retold a hundred more times, I’d be delighted. My version is more light-hearted. There’s no blackmail to get Tuck Belle to visit the beastly prince, no one’s life is in peril. Rather, you have the story of two lonely young men who happen into each other’s lives and develop friendship and romance… while one of them refuses to let the other see his face or learn his real name.

Our beast, Frederick Deor, has been out of public eye so long that the people he rules over assume he is dead. He closes himself inside his castle with the small crew of loyal servants and advisors that he hasn’t yet scared away with his tantrums. He’s even chased away his royal parents. He is so focused on his curse that he may not realize how lonely he is… or how lucky he is to have such devoted friends at his side.

Our belle, Tuckington Belle, is a young man with a romantic and fanciful side. He remembers Prince Frederick from his childhood, and part of Tuck’s wistfulness is influenced by the fact that he was one of the few school children to never receive an invitation to a playdate at the castle. The day he thought he might receive one, the castle gate closed for the last time. In writing this part of Tuck’s story, I started thinking about parts of my childhood that I had felt at the time I’d missed out on. As I sit here now, many years later, I can’t think of anything that I regret not doing. (I mean, I wish I’d spent some more time trying to play soccer, but that’s another thing.) But, I do remember having that wishfulness for things that didn’t happen or for learning the truth about certain things before I was ready. (Santa, I’m looking at you. Or, more specifically, I am 6 years old and looking at my 12 year old cousin who apparently lacked the logic to know not to say certain things about Santa to 6 year olds.)

So when Tuck and Frederick meet, it’s a moment for each of them that satisfies a curiosity and need and a little something more. I wanted this story to be light and funny but also to appeal to that sense of nostalgia that we all have for second chances and things made right. I chose the excerpt to go along with today’s topic.  I hope you enjoy it. Comment and let me know what you think, or tell me about when an older cousin ruined a childhood belief for you! (Note: “George” and “Frederick” are the same person. In keeping his identity secret from Tuck, the prince is using another name.)

George hurried to stand. “I’ve kept you. I’m sorry. I suppose I lost track of time.”

“It’s all right. I enjoyed it. May I come back tomorrow?”

“Do you want to?” George sounded hopeful.

George didn’t answer for a long time. Tuck was about to excuse him when he said, “Because you’re beautiful, and I’m….”

“George, whatever reason you think I should wear this mask for, if it’s a perception you have about your looks or if someone has said something to you, I promise you I’m not that way.”

George gave a soft laugh. “You swear that you won’t scorn me.”

“And the end of the day, they’re just servants.”

“And what am I to you?” Tuck thrust his chin up.

The answer stunned him. “A friend.” George hovered near him, perhaps wishing to touch Tuck’s face or shoulder, but he stopped short of making a connection. “Sir Michael is here with your clothes. He’ll show you out.” With that, he left. Tuck stood for a few seconds before Sir Michael told him it was okay to remove the blindfold. It was a silent ride back to the gate.

“I will.” Tuck alighted from his mount and exited through the great door, the same one he’d watched the sixteen-year-old prince close. As he walked away, the vision of Prince Frederick’s eyes returned to him, how blue they’d been and how full of sorrow. The castle was quiet tonight, no hint of the usual wailing or ghostly cries.

“I… I didn’t think you were listening.”

Todd stopped short and stared at him. “I am always listening. It is my job. As your servant.”

“Lord Todd—” Usually the formality was enough to remind Todd of his position, but tonight it went unheeded.

“No! We stayed! Because we love you. Fred—Your Highness, we love you, and there is nothing any of us here wouldn’t do for you, and I swear to God, if you act like that isn’t friendship, I’ll… I’ll—” He struggled, face growing a deeper red. “—I’ll hit you with my boot!” He paused to gasp for breath as Frederick burst into laughter.

He pointed at Todd’s three-inch heels as he clutched his stomach. “You could kill someone with those!”

Glancing down, Todd began to laugh too. “Perhaps we should make them mandatory for our knights.” Picturing Sir Michael in Todd’s boots made Frederick lose all control. He fell into a chair and laughed until he couldn’t breathe.

“I’m sorry. I didn’t mean it when I said you were only a servant.”

“Good.” Todd brushed himself down, avoiding Frederick’s gaze. “Because it was a ridiculous thing to say. Just because a person is utterly devoted to someone, it doesn’t make them a servant.”

“What does it make them then?”

“You ass.” Frederick made a half-hearted swipe at him, but Todd was out of reach.

“Permission to sit, Highness?” The lightness in his tone revealed his teasing; they rarely went in for protocol like this even though Todd was strict in enforcing it among others. Frederick gave him a regal wave, and Todd lowered himself into another chair. “So, are you going to tell me all about your wondrous evening or do I have to get it all from Gracie, who I have on good authority was listening at the door?”

“My own. She was standing beside me.”

“So I have to apologize to her too?”

“If I were you, I’d compose a sonnet in apology and recite it at breakfast.”

Frederick groaned. He stood up. “Best go face the music. You know, if I were a better prince, I’d let you all be miserable without my assumed love.”

“You are a good prince,” Todd said quietly. “You will be a good king.”

Frederick didn’t face him, not wanting Todd to see his reaction to that statement. “Well. It’s a shame I’ll never be able to be a king to anyone except you.”

One thought on “His Cursed Prince by Ryan Loveless Guest Post & Exclusive Excerpt!”