Hi guys! We have Tara Lain popping in today with the tour for her upcoming release Home Improvement, we have a great guest post from Tara, a fantastic excerpt and a brilliant $10 Amazon GC giveaway, so check out the post and enter the giveaway! ❤ ~Pixie~ 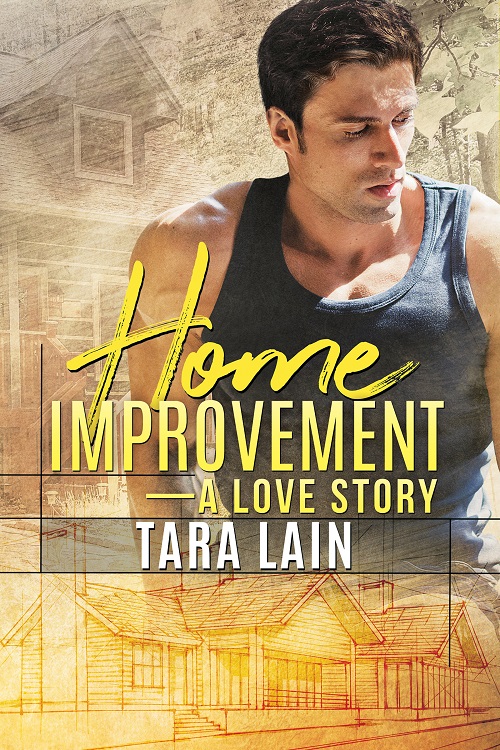 (A Love Story)
by

Romance on Aisle Sixteen—opposites attract amid the hammers and screws of the home improvement store.

Gabe Mason became a father at seventeen, and his daughter, Ellie, is the most important thing in his life. But being the parent the courts demand means Gabe has given up most of his dreams—education, making furniture, a gay social life—to be a model dad with a steady, reliable job in a home improvement store. Life’s predictable until Jerry, a shy, eccentric guy in a hat and sunglasses, begs Gabe to oversee the renovation of his run-down mansion.

Gabe loves the house and the work, and Jerry’s pretty lovable too, but when Gabe discovers Jerry’s secret identity, he fears their passion could overturn both their lives forever.

Hi and welcome. I’m so happy to be here to kick off the release of my new novel, HOME IMPROVEMENT – A LOVE STORY. As I was wondering what to share with you, I happened to see a blog I wrote a few years ago when my book, Knight of Ocean Avenue was released. The blog said, Going Into Construction and it talked about how I’d never really written a blue collar guy before. That made me chuckle because since then that book I’ve kind of made a speciality of blue collar heroes in novels like Knave of Broken Hearts, Fool of Main Beach and Love You So Special.

Now I’m at it again. My hero in HOME IMPOVEMENT – A LOVE STORY is a furniture designer who finds the market for hand crafted furniture kind of meager, so he holds down a solid job in a home improvement store.

I actually got the idea for the book after we moved to Ashland, Oregon. Unlike southern California where we’d had resources of every kind in multiples for any home renovating project we might do, in our new location we mostly had to find things at Home Depot and Lowes, so I spent a lot of time in those stores. As authors tend to do, I’d look at these stalwart guys in vests and wonder “what if”. What if one of these guys is gay? What if he met a really unusual customer and got sucked up into a world totally unlike his own?

The result is this opposites attract, single dad, hidden identity love story that early reviews seem to be liking a lot. I hope you’ll like it too.

When he got to the end of the aisle, he looked casually to his left. Tight against a display of light fixtures, back turned to Gabe, stood the guy in the beanie. He had long legs in baggy jeans, an equally baggy sweatshirt that still stretched across really wide shoulders, all his hair covered by the cap, and still the total strangeness didn’t obscure the view of one world-class ass inside the jeans.

Gabe cleared his throat but didn’t get too close. “Can I help you find something, sir?”

“Wha—” He half turned, and Gabe saw he’d put on sunglasses after he’d withdrawn from peering around the corner.

“Can I help you, sir?” Gabe thought he should probably walk away, but the guy had become kind of a challenge.

The customer reached into his jeans pocket and pulled out a drawer handle. He muttered, “Need handles this size.”

Gabe took it. “All right, sir. If you’ll come with me, we have the drawer pulls at the end of aisle sixteen.”

The guy nodded and turned but never raised his head enough to look Gabe in the eye. Still, his high cheekbones and full lips made his face striking, even when it was pointed at his shoes.

Gabe started walking, trusting from the soft scuffling of sneakers behind him that the man was following. Those footsteps slowed when they passed the woman with the kids as she gathered the last of her screws, but he sped up again after she dragged the children toward the checkout registers. In front of the rows of drawers containing handles and knobs, Gabe pointed to the samples attached to the front of each drawer. “See any you like?”

The guy’s head barely moved, so through the glasses, Gabe couldn’t see if he even looked. He shrugged.

“Brushed nickel, maybe? Or are you a chrome guy?”

“So no chrome. Nickel, then.” Gabe walked to the drawers and held out the sample the guy had given him to check for size and spacing center to center. He picked a couple of modern pulls he liked and took them from the drawers, then held them out to the man.

He looked at the pulls intently, cocked his head, and then ripped off the glasses somewhat impatiently, as if someone had made him wear them.

Gabe sucked in a soft breath. The guy’s eyes were two different colors, one a deep blue and the other light green. Startling and very distinctive. Maybe it affected his eyesight or sensitivity to light and that’s why he was wearing sunglasses in ImproveMart?

The guy reached out a long-fingered hand and tapped the handle that was Gabe’s favorite—a simple wide U-shape of brushed nickel. Gabe nodded. “Yeah, that’s a good one. How many do you need?”

“Uh, eight.” His voice was soft to the point of nonexistence.

Gabe pulled the drawer out farther and began counting out the plastic packages that contained the handle and necessary screws, piling them on the shelf beside him. “Need anything else?”

The guy had put his glasses back on by the time Gabe turned to him. Darn. Those eyes are something. The man nodded his head and pointed to some simple, ball-shaped drawer pulls. “Ten.”

“Oh, I hope I have enough.” Gabe pulled open the drawer and started counting.

The dude stepped closer to watch the counting, which turned out to be a bad idea for Gabe’s autonomic responses. What is that smell? Like some mix of orange and spice. Whatever it was, Gabe’s lower regions came out for a sniff. He shifted his feet and pressed his elbows against his work vest to be sure it covered his crotch. Down boy.

He forced a smile as he scraped the last package from the drawer. “There you go. We just made ten.” Gabe looked around. The guy had no cart. Not even a carry basket. What exactly was he planning on hauling stuff in?

The man seemed to realize it at the same time as Gabe. He grabbed his lip between his teeth, looked down, took hold of the hem of his giant sweatshirt, and held the bottom out like a bag.

Gabe chuckled. “Excellent save.” The problem with the dude’s invention was it raised the shirt from his narrow hips—and what might, just might, have been a half-mast condition thrusting out the front of his jeans. Don’t need to know that—if it’s true. Hell, just what he needed. To get turned on by weird customers. Tara Lain writes the Beautiful Boys of Romance in LGBT erotic romance novels that star her unique, charismatic heroes. Her first novel was published in January of 2011 and she’s now somewhere around book 32. Her best-selling novels have garnered awards for Best Series, Best Contemporary Romance, Best Paranormal Romance, Best Ménage, Best LGBT Romance, Best Gay Characters, and Tara has been named Best Writer of the Year in the LRC Awards. In her other job, Tara owns an advertising and public relations firm. She often does workshops on both author promotion and writing craft.  She lives with her soul-mate husband and her soul-mate dog near the sea in California where she sets a lot of her books.  Passionate about diversity, justice, and new experiences, Tara says on her tombstone it will say “Yes”!