Hi guys, we have Natalina Reis stopping by today with the tour for her new release Infinite Blue, we have a brilliant guest post from Natalina, a great excerpt and a fantastic $10 Amazon GC or a backlist title giveaway so check out the post and enter the giveaway! ❤ ~Pixie~ 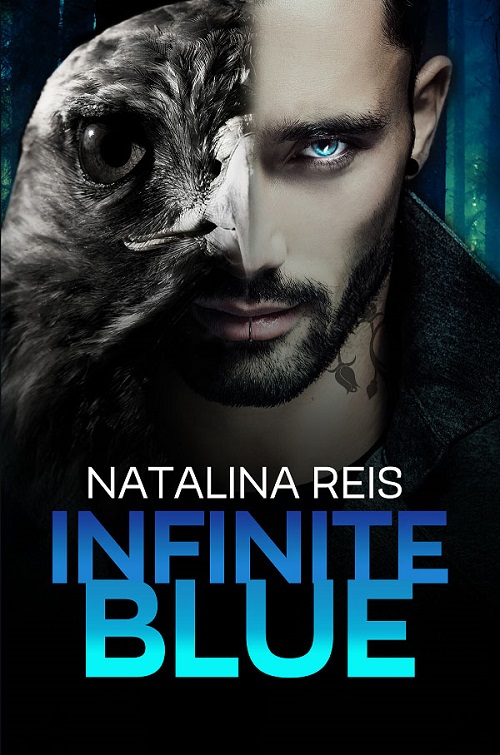 When a shifter and a human are bound by fate, neither man knows if their connection will be enough to save not only their growing love, but their lives.

Shahin Halcón has been taught that if and when he meets his soul mate, he’ll know immediately. Always the rebel, he doesn’t believe it until the day he crosses paths with Cai, a full-human.

Plagued by unsuccessful relationships and heartache, Cai Banes’s life is quiet and unexciting. When he meets young and wild Shahin, his life is turned upside down, and he’s not sure he likes it.

But neither can deny the powerful pull that draws them together.

Old secrets and ancient myths about cross-species relationships plague their romance and threaten to put their happiness and life at risk. Will their love for each other be strong enough to survive? People who know me personally would be very surprised if they knew that I love to write evil characters. I’m not sure why that is, but I think it’s because of how satisfying it is to beat them at the end of the book. Maybe I’m unconsciously taking my revenge on bad people that I either know personally or heard of. After all that’s how a writer fights—with words.

In Lavender Fields I wrote an evil angel who puts the two MCs through hell before getting defeated by the forces of good. In Infinite Blue I went with a more mortal version of antagonist. Even though not a supernatural being, this character wins the trophy for being the Most Wicked.

When I was a kid I loved watching scary movies, especially those with a paranormal or sci-fi background, but refused to watch movies where the big baddie was someone close to the MC—that scared the crap out of me and meant many sleepless nights. Because of this I have written Shahin’s mother as the antagonist—and not only because she doesn’t approve of his relationship with Cai. Her behavior from the beginning of the book is despicable for a mother. It starts with her refusal to accept Shahin the way he is and develops into something truly malevolent (don’t want to give any spoilers so you have to read the book to find out).

Is there anything viler than someone who’s supposed to love and take care of you but instead chooses to hurt you? It brings a sense of betrayal along with whatever wicked thing they did. If you were ever betrayed by someone you cared about, you know how it hurts in more ways than one. It hits you right in the heart, burns you from the inside out, and often makes you blame or even hate yourself. That’s why I picked someone close to Shahin to be the big baddie in Infinite Blue.

Who are your favorite types of antagonists and why? Cranky didn’t even start to describe how Cai woke up that morning. The day ahead loomed over his horizon like a large bird of prey ready to pounce on him. Why hadn’t he said no? Why was it always so hard for him to say no to his sister? All she had to do was bat her thick lashes and he was lost.

A little witch is what she is. But he loved her and he was hopeless against those baby blue eyes of hers.

He was going to suck it up and be a man. How bad could it be? He would go to the assigned meeting place, meet this guy his sister was so excited about, and if he was as bad as Cai thought he was, all he had to do was make some excuse and flee the scene. Memories of the last time his sister tried to set him up with someone flooded his mind. He remembered a red-purplish face as his date emphatically declared himself “very straight” many times over. Lyra had assumed the man to be gay and had been determined to pair them together.

Oh shit. This could be bad.

By the time he left his house, his bad mood had reached fever pitch, and if anyone was unfortunate enough to approach him, he was afraid he would eat them alive. There were very few things he hated more than blind dates. He was not exactly someone who qualified as a hot number. Even though he was in his midthirties, his hair had gone silver many years back and he wore it as a protective shield against possible disastrous relationships.

On his way to the restaurant where he was to meet the amazing Shahin—his sister’s words—he decided he needed some strong coffee if he was to survive the humiliation of another failed attempt at romance. It hadn’t been a bed of roses for him since Jack, his boyfriend of many years, had made the startling announcement he’d met the love of his life. As if the shock of betrayal had not been enough, Jack announced—shortly after the breakup when Cai’s heart was still hemorrhaging—that he was marrying his high school sweetheart, a woman Jack had frequently referred to as only a friend.

Starbucks was on the way, a beacon of promised comfort and relief. A cup of good coffee had always been his self-medication—nothing a good cup of java wouldn’t cure. The line was long and the room was packed with the usual crowd, a mixture of college students, writers, and a few moms with their toddlers in tow. As Cai waited for his turn, he scanned the room. He loved people-reading, a term his sister had coined a few years ago after realizing that was one of her brother’s favorite pastimes.

“You should talk to people, interact,” she had said, her protective sisterly claws fully out. “Instead, you sit there watching them.”

“Anthropologists have been doing it for a long time.” His usual comeback.

“Anthropologists actually interact with the people they’re studying, bro. What you do is just a bit creepy. And definitely sad.”

She wasn’t wrong. It was a little pathetic that a thirty-five-year-old would be satisfied to sit in a coffee shop observing people and life happening around him without ever stepping in to participate. Satisfied was not the right word for it though. Cai feared what may happen if he stepped out of his comfort zone. He had taken a chance with Jack and look what it got him—nothing but heartache.

A deep blue caught his eye from across the coffee shop. A pair of amazing eyes met his scrutiny with a take-a-good-look-I-dare-you glint. Cai’s first instinct was to look away, but he couldn’t, captured and paralyzed by the electrifying vibe the man with the deep ocean eyes was emitting. The man—younger than him—had short honey-colored hair that spiked slightly on top and left his face and neck exposed. An intricate black ink tattoo stretched down the side of his neck to hide underneath the plain white T-shirt he was wearing, only to emerge again from below the short sleeves and down his well-defined biceps.

Were those roses?  Cai’s body caught on fire as the desire to trace the edges of the tattooed flowers grew to alarming heights. He stuck his hands in his jeans pockets, trying to control the itch on his restless fingers. The strange man with the bottomless eyes was still staring at him, caressing without touching, tender and passionate all at the same time.

“Can I take your order?”

The voice startled him and Cai looked away momentarily, placing his order for a flat white. When he looked back, those eyes were still glued to him. Cai swallowed hard as his admirer licked his lips.

The phone vibrated in his pocket. Reluctantly, he pulled it out and answered. “Yes?”

The other man was still staring at him with a fire that defied the laws of physics, for it soothed as much as it burned.

“Are you there yet?” It was his sister. There where? Then he remembered.

“On my way,” he lied. “Stopped for liquid courage.”

“For God’s sake, Cai. You sound like you’re walking to the gallows.” Sometimes he wished Lyra didn’t read so much. She didn’t talk like normal people her age.

“I might as well be, Lyra.” He stole a quick glance across the room to check if the handsome stranger was still there. He was. God, Cai was the arrow in a compass and he was the North Pole. Irreversibly and powerfully attracted.

“Don’t embarrass me by not showing up, Cai.”  He had almost forgotten about his sister on the other end of the phone line. “He’s my coworker’s cousin. Please, bro. I promise I won’t ever try to set you up again.”

Not that he believed her, but it was a very tempting proposal. “Okay, I promise. I’m leaving right now.”

Hanging up, he took a couple slow breaths, trying to get in control of his body. Good thing he was wearing a long duster coat he could use to disguise how much the stranger affected him. Cai held the coat by the edges, wrapped it closely around him, and grabbed the coffee cup to leave. As he walked by the object of his sudden madness, the other man’s sexy full lips stretched into a wicked smile, releasing a million butterflies in Cai’s chest.

How would it feel to touch my lips to his? The coldness of the silver snake bite he wore on his lower lip rubbing against Cai’s unadorned mouth and tongue would be as thrilling as exploring the muscles barely hidden under the T-shirt. Cai shook his head and made himself lower his eyes to the floor. Like it or not, he had committed to this blasted blind date, and he was not one to renege on his promises.

Just as he was about to walk past, the stranger reached out quickly and handed him a business card. “Call me.”